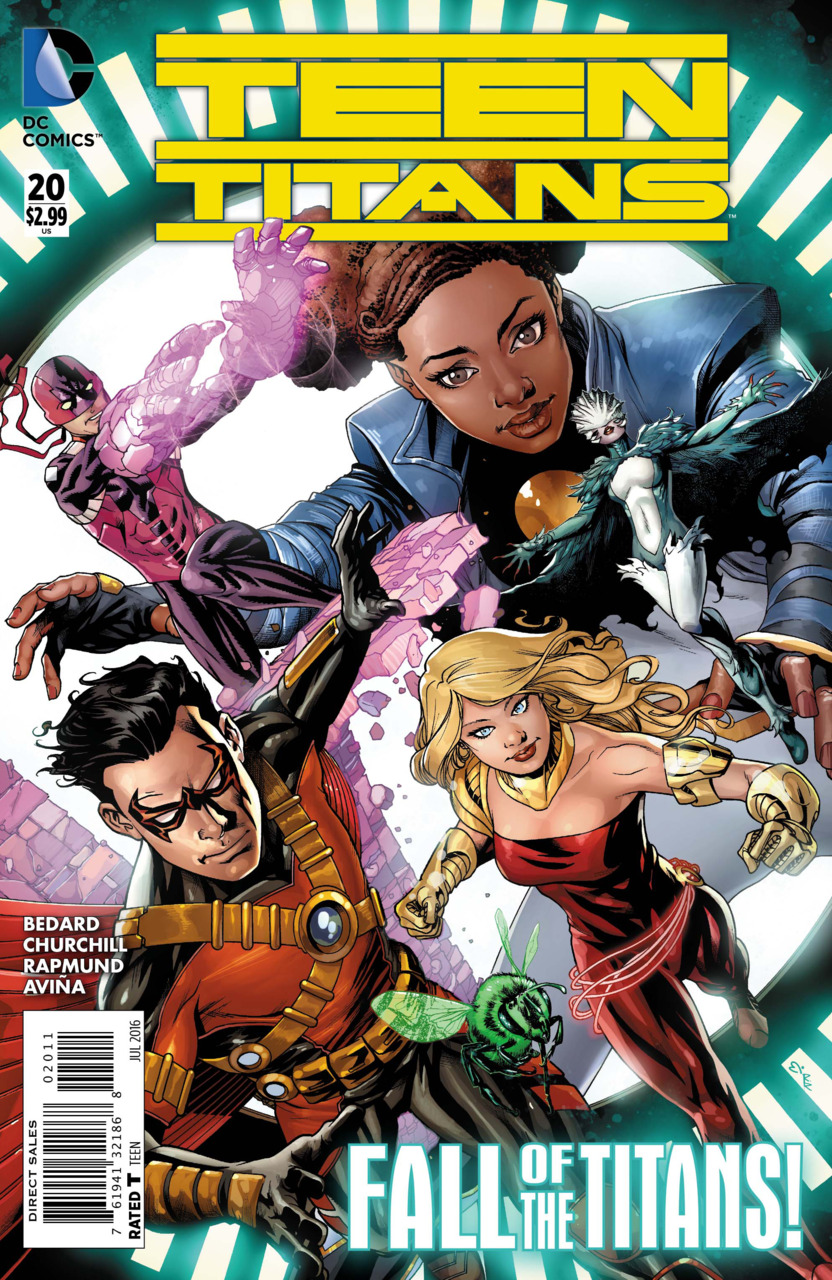 “Metatroll 93” does not open with the Titans but instead with a poorly drawn Lex Luthor. He is looking at a website that belittles super villains like himself. He sees memes of himself, Joker, and Killer Moth. The final meme is not immediately shown but Luthor does say that some do not have a sense of humor.

We shift to Monsieur Mallah. He is furious and throws the computer tablet saying that nobody makes a laughing stock of the Brain. He sees the meme as a picture of the Brain with the caption: “They said I could be anything I wanted…So I chose “Brain in a Pickle Jar””. Brain seems not to care and feels that Mallah should not care either. Mallah wants to fight for the Brain’s honor. To make Mallah happy, Brain agrees to go after the originator of the post. Mallah grabs an assault rifle and the Brain and goes off.

In Greece, the Titans are training with “live fire”. Red Robin wants the Titans to go after him as a training exercise. He asks them not to hold back because he will not. Wonder Girl is the first to find Red Robin. She attacks him with her lasso of lightning which Tim catches with his baton. He activates a switch which feeds electricity back at Cassie and she goes down. Tim checks on her vitals and hopes that she will not hold this against him. We see the huge fist belonging to Power Girl smash in front of the unconscious Cassie and Tim. Tanya accuses Tim of being harsh in his attack on Cassie. Tim takes off to face Tanya eye to eye. She asks him what kind of feedback circuit he used and Tim responds with he will show her later after she regains her eyesight. Tim activates a flash grenade in Tanya’s face blinding her and forcing her to her knees. Tim lands to face Beast Boy in tiger mode attacking. Beast Boy is on top of Tim when he sprays chlorine gas into Gar’s face. To compensate, Gar changes to a butterfly which Tim catches in a jar and throws it away. Bunker races to catch the jar and is knocked out by Red Robin with a crack to the back of his head and he goes down. Last up is Raven. She uses her dark magic to attack saying that this needs to end now. Tim says that it will be over when no one can catch them with their guard down. Raven however sees Tim’s true feelings. He blames himself every time the Titans are caught unaware. Tim is punishing himself. The others join them.

Tim says that the only way they will improve is if they recognize and eliminate their vulnerabilities. Cassie confronts Tim and says that their weaknesses are all in the files Tim is keeping on the Titans. Beast Boy is surprised and accuses Tim of keeping files of their flaws. Tim says that he has a list of their vulnerabilities, not their flaws. Cassie now knows that the lasso can be turned against her, she will be more careful in the future. Gar’s problem is that he is predictable. Tim knew that he would turn into something without lungs when he attacked him with the chlorine gas, surmising that it would be an insect that he could catch in a bottle. Bunker’s bromance with Gar was his weak point. Because of his lack of friends when he was younger, he is overprotective of his friends now. This enrages Bunker who grabs Tim with a brick fist raising him up. Tim gets a communication alert. Bunker releases him and he finds that it is Batman. Batman has found the website that was shown earlier but it also includes a meme of Red Robin saying “Follow me, teen heroes…straight to prison!” Batman says that the Teen Titans project has gone off the rails. Bruce tells Tim to fix it or else he will fix it. Tim says that he is on it.

Raven teleports the Titans to New York. The plan is for Beast Boy and Bunker to cover the front while Power Girl and Raven cover the rear. Tim and Cassie will make initial contact. Tim discovered that the website, the “Legion of Dumb” originates in the apartment they are entering and surrounding. The administrator just calls himself Metatroll93. Tim wants to make him an ally and if that does not work, he will pull the plug.

The two find Metratroll. He is lounging on a couch with a strange dialog coming out of him, saying that he should have expected someone would turn up. We get a back shot of Metatroll and we see that he has an implant on the back of his head. Behind Tim and Cassie we see a shadow approaching. Tim finds the implant and discovers Brain. Mallah hits Cassie with the butt of his rifle and holds her at gun point. Tim turns his attention on Brain threatening to smash his casing. Mallah puts an implant on Cassie’s head turning her into Brain’s puppet and orders her to attack Tim. Next issue caged animals.

This issue is the start of the final arc of this run of Teen Titans. I found this issue enjoyable. It was good to finally see Tim able to use his wits to take down each of the Titans without his tendency of whining like he has been doing in the prior issues. He even has a plan prepared when they arrive in New York to find Metatroll.

From the looks of the implant Brain is using, it burrows into the spine of the victim so it will be interesting to see how this will be removed from Metatroll and Cassie, will this change them forever?

Overall the issues was a fun read and we get a glimpse of the real Tim Drake in this issue.