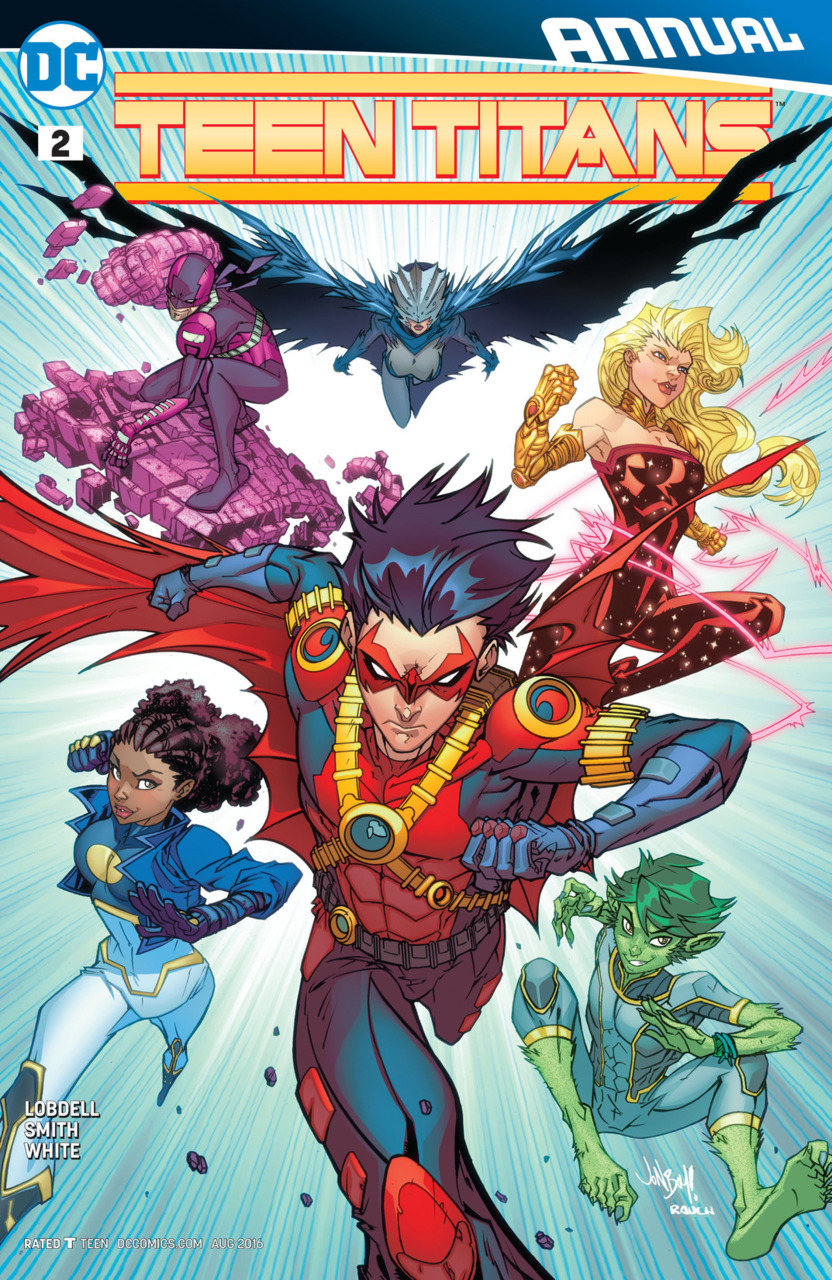 “Last Dance, Last Chance… For Death” opens in a night club. We see Miguel and Cassie dancing with Tanya and Tim looking on. Tim does not look comfortable and Tanya makes him dance with her. Miguel and Cassie both see Tim letting loose and soon there is a cut in in their dance. We meet Aaron and he does not want to dance with Cass but with Miguel instead. Cassie smiles and walks off leaving the two men dancing.

Outside the club we see Raven. She is being hit on by guys waiting to get in while she is carrying a lot of food. She is going to share the food with Garfield. The outing was his idea but he is feeling self conscious about his appearance and he does not want to actually go in saying he is not feeling it anymore. The two sit and eat in the ally.

Inside, the two men dance and start to kiss. Aaron then offers green capsules to Miguel who refuses the offer. Arron swallows the capsules. Meanwhile Cassie goes up to join Tanya and Tim and now Tim finally lets loose and dances with the two girls. Back on the floor, Aaron bends over and grabs his stomach. As Miguel is checking on him, Aaron transforms into a green monster shocking the onlookers. Miguel raises his psionic bricks to defend himself and starts to fight the new creature. Tanya suddenly in giant mode kicks the creature knocking him unconscious and helps Miguel up. Cassie and Tim, after changing into his Red Robin costume, jump over the railing. Red Robin begins examining the unconscious Aaron who changes back into a human. Cassie then armors up because she sees other kids turn into green creatures. Wonder Girl goes off to protect the people while Red Robin contacts Raven with his thoughts. Robin tells Raven that the kids are running wildly out and Raven extends her shadows to give them “peace”. Beast Boy goes into the club to join the other Titans. The Titans found that if they knock the affected kids unconscious, then they revert back to their original human forms with no ill effects other than the fighting injuries.

Beast Boy finds Red Robin in the kitchen. We get panels showing Red Robin’s memory. He remembers a woman approach each of the kids who changed. They interacted with her as one would a waitress but she never returned with any drinks. Red Robin activates his lenses and he sees a set of stairs descending into the ground under a table which Beast Boy removes. The two descend. Red Robin recounts the teams encounter with Professor Pyg way back in issue #15. Red Robin does not think that Pyg is involved here, he thinks it is something grander. The two stumble across Sister Blood and several of her acolytes. Beast Boy recounts an encounter from the series “Ravagers” where she tried to get his blood before.

The rest of the Titans assemble and Raven releases the scared people from her shadows and they just collapse. The four then move to find Red Robin.

We get a recap of Sister Blood’s attempts to get Beast Boy’s blood in the past that culminated with the Pyg affair in Gotham just after the Robin War. She wanted more of Gar’s blood so she used her psychic clerics to call Gar but unfortunately for her they should have gotten Beast Boy by himself. Sister Blood’s acolytes then turn into green creatures and attacks Red Robin and Beast Boy. Red Robin appears to have been overwhelmed when the other Titans arrive. In the fight they learn that their hitting tactic is not working. The process is more effective on the subjects who embrace the power of the Blood so the Titans attack harder. During the fight, Red Robin discovers that Beast Boy is not with them so he has Raven teleport him to Gar’s location. We find that Beast Boy is attacking Sister Blood and is ready to kill her for using his power to cause so much harm. Red Robin talks him down and while they are talking Sister Blood pulls a gun which Red Robin easily takes out with a batarang without Gar knowing what happened. The two join the others who have finished taking out the acolytes and Red Robin dumps Blood on top of her men.

Red Robin asks Raven and Power Girl to take the acolytes to S.T.A.R. Labs to determine that all traces of Beast Boy’s blood is out of their systems. The others want to go and celebrate except Red Robin who is beating himself up for being sloppy and walks off.

This is a standalone issue that does not follow the story line of the monthly series. This could have occurred just prior to the Brain arc because the team is in New York and it is prior to Red Robin’s training exercise that started that story off.

I did find this issue jarring at first because the last time we left Red Robin, he was in Belle Reve being questioned by Amanda Waller and here we see him dancing with Tanya.

The good points. I enjoyed the action here, as it was fun to see the Titans use their powers to fight these creatures. It was also great to see Tim Drake as a detective. He relied on his powers of observation and deductions to solve the problem even though he was able to solve the problem a little too quickly. Unfortunately we are left with emo Tim Drake at the end of the issue.

Overall, the issue was alright but it did have its problems.