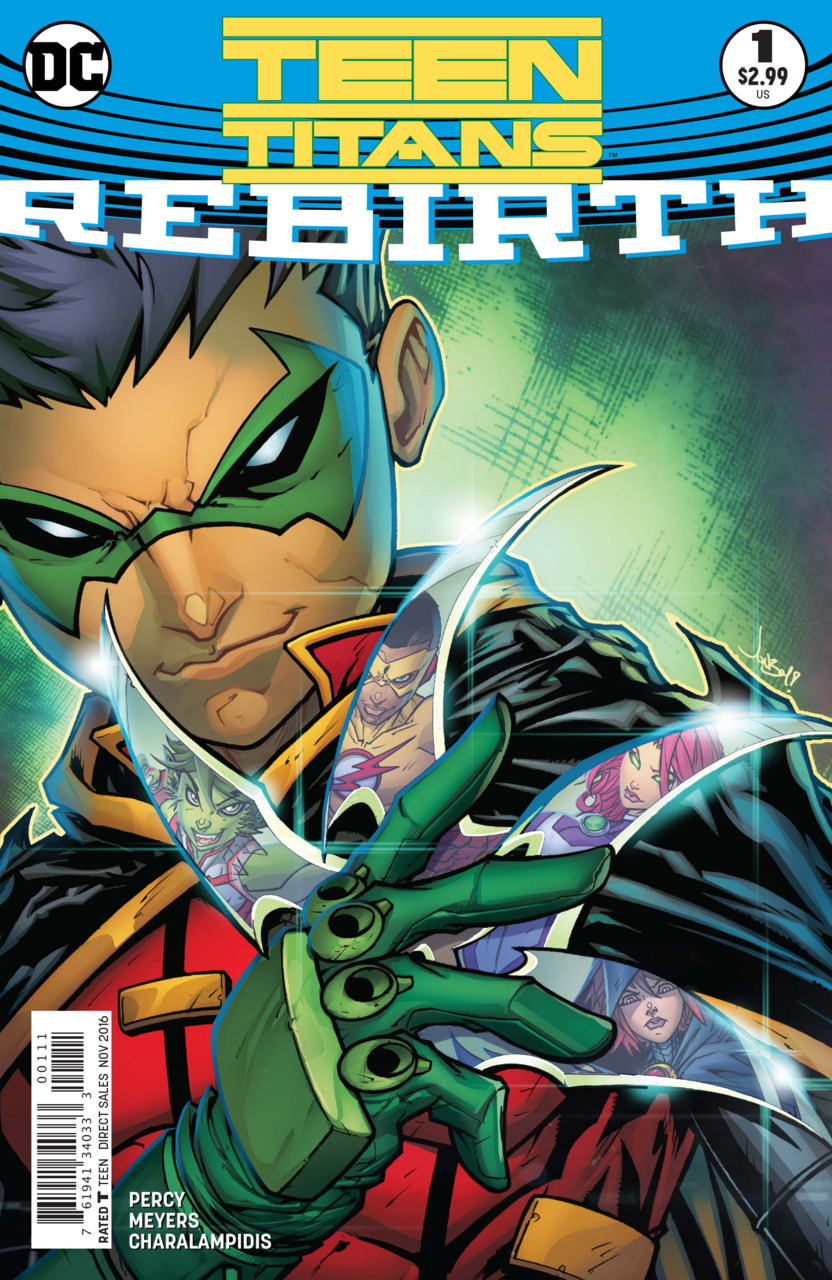 Our issue opens on Hollywood, California where we see Beast Boy partying amongst a group of his friends as a hooded figure watches him. While showing off his DJ skills and flirting with a woman, Beast Boy and girl jump into the pool for a swim. Transforming himself into a shark (because that’s cool), Garfield scares the girl out of her mind and she leaves. Yelling after her that he was just joking, Logan is suddenly electrocuted in the water as the hooded figure, holding a taser, whispers “one down, three to go.”

Jumping over to the island of Torando in the Caribbean, we see Starfire talking to a police officer. Kory is busy looking into a human trafficking operation that is based off of the island she is on. As she leaves the officer and walks along the beach, Starfire reminisces about her time with Nightwing and had offered for him to come with her to distract himself from the death of Tim Drake, aka Red Robin (see Detective Comics #940). As a young boy is suddenly kidnapped in front of her, Kory leaps into action and blasts the man holding the child with her powers. The man yells that someone paid him to kidnap the kid in front of her, but before she can question him further, a shock gloved head knocks Starfire unconscious.

Over in New York City, Raven is busy clearing her mind in her favorite place – the NY Art Museum. After using her abilities to bypass a security guard, Raven continues to walk the galleries alone when she suddenly comes across a section that holds a horrific painting of Trigon, torturing a young Raven. As she races away from the scene, a toxic dart catches her in the neck and she succumbs to the frightening scene as the hooded figure comments that “[she] might be the strongest of them all…if [she] weren’t so damn fragile.”

As we finish out globetrotting, we come to Central City where we see a young Wally West (not to be confused with the version seen in the Titans series) who is busy walking the streets when he notices a robber running out of store with a bag of money. Speeding into action, Kid Flash snatches the bag back and returns the money to the owner. Sometime later, we see Wally as he is trying to hone his abilities on the subway lines…using the long lines of track to speed up, and then attempting to stop. During one of these exercises, Kid Flash comes upon an unconscious person. Rushing to their aide, he realizes that the prone form is really some type of robot…which sprays a gas that knocks him out.

Awakening inside a containment unit (similar to something I saw in “The Incredibles”) the four captured heroes begin conversing about who has taken them hostage. As Beast Boy attempts to transform he is shocked by the force field holding them. As Raven senses that they aren’t alone, the final panel reveals who has succeeded in capturing the former Teen Titans…none other than the Son of Batman – Damian Wayne, aka Robin.

What an interesting story! Something I was genuinely interested and reading, but then surprised to find out its conclusion. I have to say, Damian is by far one of my favorite characters in the DC Universe, let alone the Batman Family (besides the Dark Knight himself), so I was thrilled and excited to see that he would be joining the ranks of the Teen Titans.

As we saw in the final issue of the previous Teen Titans series, each member of the team went their own separate way after the death of Tim Drake…and as the last panel hinted, we would soon see a new Robin take up the mantle and lead the Titans once again.

Throughout the issue, I never put together once that Damian was the person responsible for kidnapping the Titans…however, I felt utterly foolish once I saw that he was. Damian would never go about and ask each of these heroes if they wanted to be on a team he was putting together…he would definitely kidnap them to see what they were made of. It was also interesting to see how he managed to take down each of the members, electricity for both Beast Boy and Starfire, using the terrifying relationship with Trigon (and maybe some Scarecrow gas) to get Raven…and finally using Wally’s heroism against him. It will be interesting to see what our first issue will hold, and see how these four will react to Damian kidnapping.

I am 100% on board with this new incarnation of the Teen Titans, and can say that I love the makeup of this team. Nothing against its previous incarnations or books, but there always seemed to be something lacking amongst the cohesiveness of the team…hopefully this new Robin will bring something new/annoying to the table, because you just know everyone is going to hate him.

I am interested to see what may happen with Tim Drake returns because (SPOILERS) he’s not actually dead. Will he join the team and co-lead with Damian? Or will he return to Batwoman’s Outsiders? (Not there official name, but it’s kind of what they are.) Either way, I am excited to see what comes next.