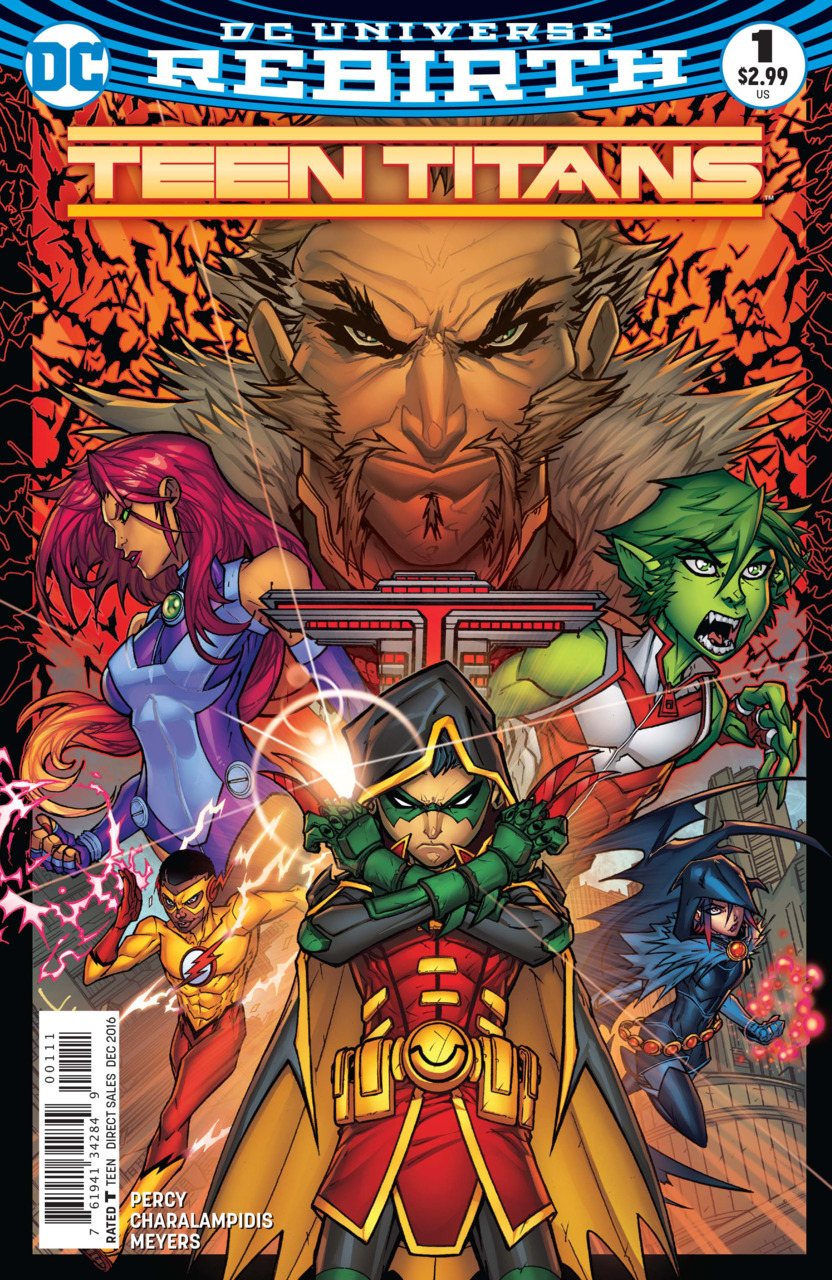 As a bat swoops above the head of Boy Wonder Damian Wayne, we see a scene that was previously seen during the main DC Rebirth one-shot. As Damian blows out the candles on his birthday cake, Robin’s voiceover describes how he knows about the legacy that he is set to claim. As Alfred comments that one shouldn’t celebrate a birthday alone, Damian counters that he should be saying that to his father. Cutting into the cake, Alfred responds by stating that Batman is away on business with the Justice League…but Damian says that he is more than glad to have Alfred as company with him. The two get into a bit of banter about the selection of birthday cake (vanilla and strawberry) when Alfred asks what Damian had wished for. Stating that “it won’t come true” if he said, Alfred responds by saying that Damian always gets what he wants.

Cutting back to the present day in the “Birdcave,” Robin drops his hood and begins mocking/telling the captured heroes how he had been able to deceive them: Beast Boy was so worried about himself; Starfire was only concerned for others; Raven was easily manipulated psychologically; Kid Flash was too busy running from his past in order to see the danger in the present. Introducing them to Goliath (who playfully licks Kid Flash on the face), Starfire becomes exceedingly enraged and manages to break the restraints holding them captive. Banding together, the heroes launch themselves at Goliath and Robin and engage in a brief fight. Incapacitated, Damian looks up only to say “see?” Wondering about his statement, Damian goes on to note that the four banded together quite nicely as a team…only together were they able to escape and take the two of them down. With the markings of a great super-team, Robin calls them the new Teen Titans.

As the four begin to protest, Beast Boy tells Robin to ask his friends to join his team…however, Damian tells them that he has no such friends due to the way he was brought up and the life he lead. Stating that he respected Tim Drake, he calls the former Titans losers, criminals and (above all) a joke. Comparing the five of them to the fingers of fist, Damian dares the others to join him. As Starfire asks the obvious question “why would we ever follow someone like you?” Robin tells them that if they don’t, then they are all dead. It is then Damian reveals a hologram with the five heroes slated as targets by an unknown source.

Back in the past, Damian releases a trapped bat from his room as he notices a wrapped gift on his bed. In his head, Damian thinks about how Pennyworth had asked him what he wished for…but he doesn’t make wishes, he makes plans. Opening the box, Damian finds a dead robin inside with a sealed, ornate letter.

“You’re only alive to celebrate your birthday because I’ve allowed it. Come home. The time has come for you to fulfill your legacy. Or die.”

As we jump to Infinity Island, the Demon’s Head strides forward and commends an unseen group on their years of study, and how they will “graduate as the most elite and deadly assassins the league has ever seen.” As the issue draws to a close, Ra’s Al Ghul calls the group The Demon’s Fist and that their hunt “begins now.”

Woohoo! I have to say that I 100% agree with Damian’s comments in this issue…the previous Teen Titans were nothing but losers, criminals and a joke. No offense to the previous creative teams or cast of characters, but this is something I have been waiting to see for awhile.

Although not much happens in this issue, it was great to see Percy and Meyers flesh out Damian’s character as to what he is planning (without actually telling us) and how he will be using the Teen Titans to accomplish his goal…and believe me, Damian will definitely be using them to help take out Ra’s Al Ghul.

I liked the moments that we got in regards to Damian’s birthday celebration and his interactions with Alfred…I’ve always rather loved these scenes, you can tell how much Damian loves Alfred…even though he would never go as far as to actually say the words. I also liked that we didn’t see Batman…although I love the Dark Knight, he tends to hog the spotlight (in a good way) whenever he is around, so I’m glad the focus was on Damian and his new Titans.

I’m looking forward to seeing how Damian’s manipulations will work out on the Titans, Starfire is already wary and it’s unknown how the other three will react. I’m also not convinced that these “targets” on the other heroes were put out by Ra’s…this could be a way for Damian to recruit them, or it could be some overall play that the Demon’s Head is trying to pull.

Overall I like the Percy/Meyers team so far, great and well written dialogue with some nice character moments tied with some beautiful visuals and great redesigns on the characters. All in all, Teen Titans is looking like one of my top reads for the DC’s Rebirth.