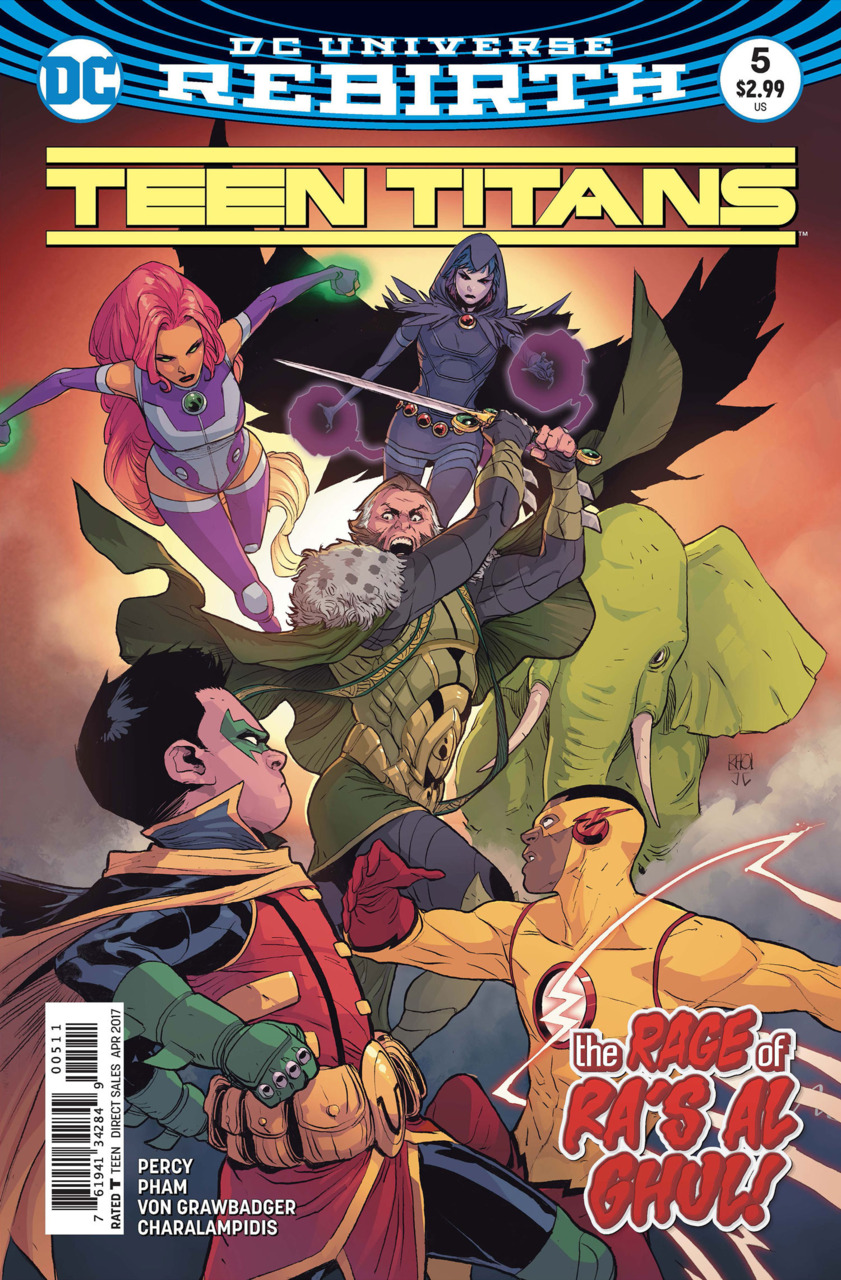 As the first story arc draws to a close, we return to find Starfire, Raven, Beast Boy and Kid Flash standing over Robin. As Starfire releases him from his chains, Raven helps to heal the Boy Wonder who starts to come around to seeing these Titans as his friends. As Robin tells the team how his cousin Mara had (literally) stabbed him in the back, the remaining members of the Demon’s Fist appear and surround them.

Meanwhile, the issue cuts to the side of Infinity Mountain where Mara can be seen digging a grave as Ra’s Al Ghul stands over her. As the young initiate continues to dig in preparation for the ritual to join the ranks of the League of Assassins, the conversation turns to whether Mara’s father (the White Ghost) would have been proud of her…however, before the Demon’s Head can answer, several guards appear to warn their leader of the intrusion of the Teen Titans.

As the Titans face off against the Fist, Damian talks to his former comrades on how Ra’s had each of them abducted when they were babies and that their true families all believe them to be dead. Appearing with Mara and a host of assassins, Ra’s Al Ghul interrupts Damian’s speech by saying that he rescued the Fist from insignificance. As Mara bellows for the Demon’s Fist to kill the Teen Titans, Plague turns towards Ra’s and seems confounded that she and her brother Blank had been taken from their family…each of them believed that their parents had offered up their children to serve the cause of the Demon’s Head.

Leaping into the air, Ra’s draws his sword, but is stopped by Robin. Engaging in a massive battle against the League, the Titans and the Fist team up and begin taking out the guards. As Ra’s and Robin struggle against one another, the Demon’s Head berates Damian calling him a genetic waste. He continues by stating that he wouldn’t be able to beat himself as “you couldn’t even beat your pathetic cousin, Mara.” Shocked that she is held in such low stature, Ra’s becomes angered further when Mara asks for orders on what to do. Comparing to her to her worthless father, Ra’s throws down a smoke bomb and escapes with Mara.

Following the battle, the Demon’s Fist departs Infinity Island and tells the Titans that they will be going off in order to find out who they truly are…a similar journey to what the Titans are now facing themselves. While the heroes stand around and begin discussing what to do next, Batman appears suddenly above them. As Robin asks how Batman had been able to find them, Goliath suddenly appears and begins to lick Damian’s face….as if in apology for leading his father to him. As the Titans awkwardly move away from the bickering Dynamic Duo, Batman tells Damian they will be returning to Gotham in order to discuss Damian’s creation of a new Teen Titans. Damian, however, says he wouldn’t be returning and compares himself to Dick Grayson who (when he was Robin) needed a place to call his own.

As Batman asks what Robin has in mind, the issue cuts away to three months later as Damian stands on a rooftop looking out onto a nearby city. As Damian thinks on he never got to be a child in a traditional sense, he agrees on importance of looking up into the sky and dreaming. As the rest of the team gather about him, Damian states that he has been thinking about their future…although he’s not sure what the future has in store for them, he knows that they are in this together. Then final panel pulls back to reveal that Damian, Starfire, Kid Flash, Raven and Beast Boy now stand atop Titans Tower in the bay of San Francisco.

Well, after five months (that feels weird to say…because it definitely doesn’t feel that long) Damian and the rest of the Teen Titans have managed to defeat the Demon’s Head and the League of Assassins. As our story began, Robin was trying to figure out who he was in a world of super heroes…was he destined to become a deadly killer among the League and become heir to the Demon? Or should he follow in his father’s footsteps and battle evil and injustice? When boiled down, Damian was essentially trying to figure out if he should be good or bad, black or white, ying or yang. After kidnapping some former Teen Titans and the newest Kid Flash, Damian tried to be Damian…but found that the Titans were more than willing to spar (verbally and physically) with an arrogant 13 year old.

As the Titans began to reveal their similar dark pasts and upbringings, Damian started to find commonality among his fellow heroes. Revealing that a group of assassin initiates were targeting the Titans, our heroes saw Robin do something unexpected…a noble sacrifice to rejoin the League in exchange for the Teen Titans’ lives. Unable to leave their new friend behind, the heroes arrived to rescue Damian and the rest is history.

Although I felt that the threat/bad guy was a little weak as this final issue came to a close, I thought that this was a great story to focus on how the younger generation of heroes feel. What is it to be a hero? This time around, Damian discovers that it isn’t about someone’s roots or parentage, but the choices that one makes, “it’s not what I am underneath, but what I do that defines me.”

The threat of Ra’s Al Ghul, the League of Assassins and even Mara are still on the board, but I think that the latter may have a change of heart knowing how Ra’s felt about her father the White Ghost. In my memory, White Ghost appeared during the “Resurrection of Ra’s Al Ghul” storyline where it was revealed the he was Ra’s’ son. Unable to live up to his father’s expectations, Ra’s came into possession of Dusan’s body when he was unable to take possession of a younger Damian Wayne. I’m unsure if this story is in canon or not, however it would seem to be as Mara and Ra’s refer to Dusan in the past tense and I wouldn’t put it past the Demon’s Head to lie about Dusan fleeing from the Assassin’s when in reality he is dead.

The art seems to be getting better and better with each issue and I am liking Pham’s representations of each member of the Titans. Definitely looking forward to his continuation on the series as a whole…however, I still think that Chris Burnham’s variant covers are blowing the standard cover out of the water. However, I may just be a tad biased towards Burnham’s art as he is one of my personal favourites.

Overall Pham and Benjamin Percy seem to be a great team and I truly look forward to reading their story each month. I am VERY looking forward to next month as they tease the appearance of the “sixth titan!” Spoilers to those who don’t read solicitations or look at future cover art, but Aqualad will be joining the ranks of Titans and I can’t wait to see this new dynamic in action.