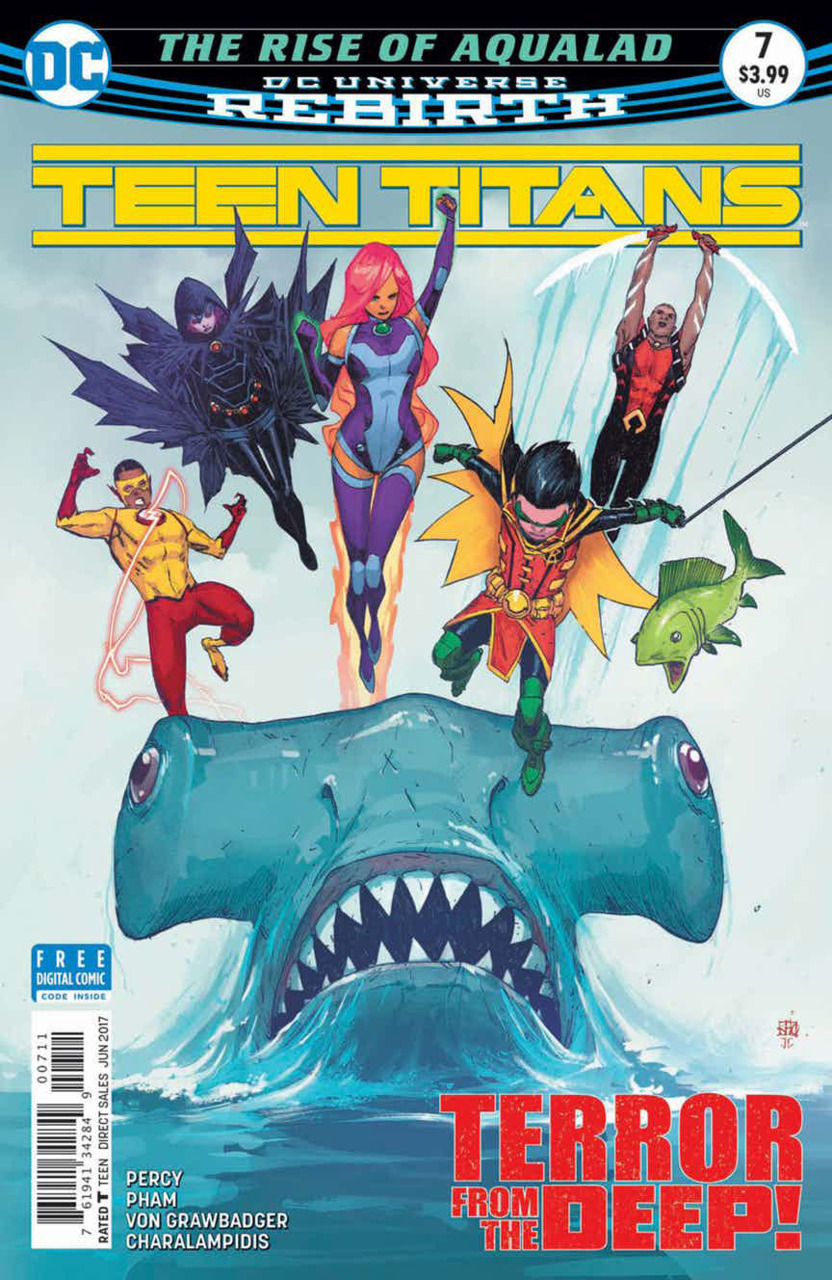 The Story (spoilers ahead): After King Shark showed up at the end of the last issue, the Teen Titans try to take him down. Unfortunately for the acting leader, Robin, no one has read his playbook and King Shark escapes as they try to figure out the specific maneuver that Robin ordered them to utilize. King Shark retreats underneath Alcatraz where he meets his army of mutated shark army. The Jackson Hyde version of Aqualad shows up at Titans Tower hoping to join the team. After being turned down by Robin to join the team, a newscast shows that King Shark still has the missing reporter hostage. As the team heads off to Alcatraz, Jackson asks to lend help. Robin insists that there is nothing for him on the team as they leave. In the middle of the fight with King Shark’s army, Damian struggles to lead the team effectively, while he tries to take King Shark down himself. Just as King Shark starts to get the upper hand by taking Damian underwater, Jackson appears and evens the odds.

The Bottom Line: King Shark’s plan is foiled, and we learn he’s working with the Black Manta, who previously was revealed to be Jackson’s father in old continuity. Jackson is accepted onto the team after saving Damian’s life. While learning to work together, Kid Flash and Raven appear to have a moment.

The Writing: Benjamin Percy tells a fun tale. The banter between the team is spot on. What reader wouldn’t smile as Damian reprimands a pouting Goliath for letting Aqualad into the Tower? It’s interesting to see the Titans struggle under the leadership of someone who has difficulty articulating orders. In the end, the problem seems to solve itself without Damian’s help. I’m not sure that speaks too highly of his leadership skills. I’m most curious about the possible developments between Kid Flash and Raven. The last time Raven had a flirtation with a Kid Flash, things didn’t go so well.

The Art: Khoi Pham continues to rock it on pencils. King Shark often looks like a joke in other books, but the art sells how terrifying he is here. The sequence where he almost kills the reporter hostage even had me nervous. When a page from a comic book can generate that type of emotion you know the artist has done their job. The previously mentioned scene of pouting Goliath is also made even more humorous by Khoi’s art.

The Verdict: The series continues to be fun. It has all the fun of a Saturday morning cartoon, with just a faint touch of Wolfman/Perez era nostalgia. Damian may be struggling to help the team find their groove, but comic has certainly already found their own.