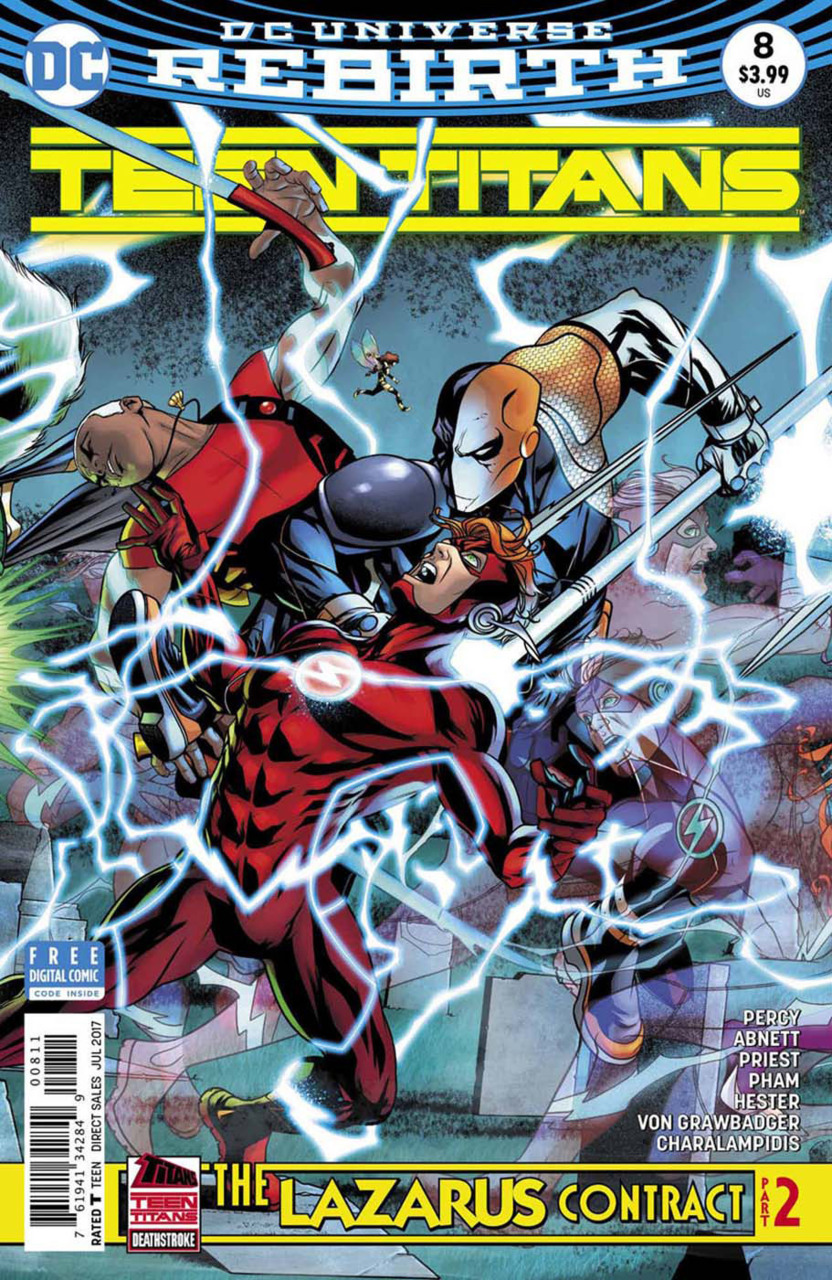 (Spoilers ahead) In the second part of DC’s latest crossover called “The Lazarus Contract,” this issue opens with the speedster known as Kid Flash racing away from Teen Titans Tower. Giving a bit of back-story on latest member of the Flash Family, we learn about Wally distrust of the Fastest Man Alive – Barry Allen aka The Flash. Responsible for the death of his father, Wally talks (via thought box) about how he never knew who his father was, and now will not be able to know. Known as the villainous Reverse-Flash, Wally is the son of the infamous villain who had once plagued Central City. Feeling lost in his own life, Wally is shown running (no pun intended) into a man seeking some help…help in the form of a busted car that the auto-enthusiast is more than happy to help with. However, we learn that the man seeking aide is none other than the villain known as Deathstroke. As the two bond over burgers and cars, Wally thinks how he could have possibly saved has father…but now will no longer be able to find that out.

As the issue cuts forward six hours, the remaining Teen Titans are busy working out when Robin arrives with grim news, Kid Flash has disappeared and the Titans’ speedster is missing as well. As Jackson Hyde and Beast Boy joke around about how Robin always knows everything (BB even compares Damian to a small, mean Santa Claus), Damian is suddenly alerted to Wally’s transponder suddenly appearing within the Tower. Staring into his hand, Robin sees Kid Flash’s transponder blinking at him and states that Wally may be dead already.

Cutting to an unknown location, we pick-up where the previous issue ended…Wally West meets Wally West. As Flash/Wally tries to warn Kid Flash/Wally about not trusting Deathstroke, a sudden electric shock sends him into unconsciousness. Removing his mask to speak face to face, Slade Wilson talks to Wally (Kid Flash) about how time is broken…but together they can fix it. As Slade converses with the young speedster, he talks about the death of his son Grant Wilson and even notes that he is aware that Wally’s father is deceased as well. Stating that all of the killing that Deathstroke is responsible for may end, he tells Wally that he is doing all of these things for his son.

Back in Titans Tower, Manhattan, Arsenal and the other Titans are busy searching for Flash/Wally when their computer is suddenly hijacked with a recording of Deathstroke and Dick Grayson (Robin) making a deal with one another. Suddenly appearing on the screen, Damian orders the Titans to meet him and his team on the roof.

In a beautiful double page spread of the Teen Titans and Titans standing on the roof of the Tower, Damian accuses Nightwing of being a traitor to his team. Stating that he had found the old footage in the Bat-computer’s archives, Damian explains that the feed was recorded from a camera that Batman had mounted onto Dick’s chest plate back when he was the original Boy Wonder. Seizing Damian by his cape, Donna Troy demands an explanation from the current Robin and this nearly pits both teams against one another, as the various members rush to defend their own. As Dick breaks up the fighting, he states that he indeed did strike a deal with Deathstroke…a deal that was done to save all of them. Realizing that he now has a plan, Nightwing notes that “time is the key…”

As we return to the unknown location, Deathstroke says that Wally/Kid Flash can utilize his Speed Force powers to allow Deathstroke to follow in his wake. Showing the mistakes that he’s made, Slade introduces Wally to his children – Rose, Joseph and Grant…all of whom have suffered from Slade’s actions/inactions. Returning to his hideout, Deathstroke states that Wally’s speed is the key to changing the past and fixing his mistakes. Agreeing to help the villain, Wally follows Slade into a back room and is shocked by what he sees.

Discovering the location of where the speedsters are being held, the Titans and Teen Titans descend upon Garden State Medical Centre in New Jersey. Splitting up, the heroes scour through some abandoned tunnels beneath the facility when they come upon the unconscious Flash/Wally. Finally come back to consciousness, Wally begins shouting that Deathstroke has Wally…the other Wally! A sudden jolt of electricity sends the heroes flying and the final panel reveals a supercharged Deathstroke wearing a costume similar to the Flash. As Kid Flash/Wally lies at his feet and apologizes for what he has done, Slade stands triumphant and bellows that he has “all the time in the world.”

It’s never good when a speedster gets kidnapped, let alone two speedsters. And mainly the reason they get taken is utilize their various time-altering abilities…and this story is no different…I think. While the first part of the “Lazarus Contract” focused on the Titans’ Wally West, this issue flipped over and focused on the Teen Titans’ Wally West. Although I haven’t had much experience with reading up on this particular character, it was great to get a back-story of this hero and revelation (to me at least) that his father was the Reverse-Flash! Not the Reverse-Flash we all know and hate, Eobard Thawne, but the Reverse-Flash created in the New 52 run of “The Flash.”

I really enjoy that Benjamin Percy gets to continue his excellent character work in this crossover story…one thing that tends to happen in arcs like these, is the main character development gets put on hold. However, Percy manages to weave in Wally’s story and his sense of loss (in terms of his father and his direction in life) into the story itself and creates a plot point around it. Of course Deathstroke shows up and dangles a cool car in front of Wally’s face in order to gain his trust…and then promises to change the past and save his father. I mean, who wouldn’t agree to help him out? But as comics will always show, NEVER TRUST THE BAD GUY!!!

Another point raised in this issue is some type of clandestine contract that is struck between Deathstroke and Dick Grayson…something that occurred when he was still Robin. Damian, as always, manages to dig up the dirt and throws it in Dick’s face (classic Damian). My only gripe is that we never figure out what this is! GAH! But, the story is only half done and we can’t spoil everything in the middle right? 😉

I was confused about one point however, what was going on with Kid Flash’s tracer? The panels show that Damian is currently tracking Wally’s location…but then suddenly it ends up in his hand. Can anyone help to explain what happened here? I’m sure it isn’t a big point; it just seemed odd that it suddenly showed up in Teen Titans Tower.

Khoi Pham continues to impress when it comes to the art, I already pointed out the lovely splash page showcasing the Teen Titans and Titans. I’m also a big fan of the connecting cover pages…each one showcasing different heroes battling against Deathstroke – this one shows off Wally West (Flash), Aqualad (though the issue hilariously points out that he doesn’t have a codename yet) and a very tiny Bumblebee battling against Slade…quite an awesome job.

Overall this issue was a great step in the “Lazarus Contract” story, and I’m definitely excited to see who gets resurrected…at least, I think will get resurrected as the Lazarus name conveys. Looking forward to the next part which continues in “Deathstroke.”