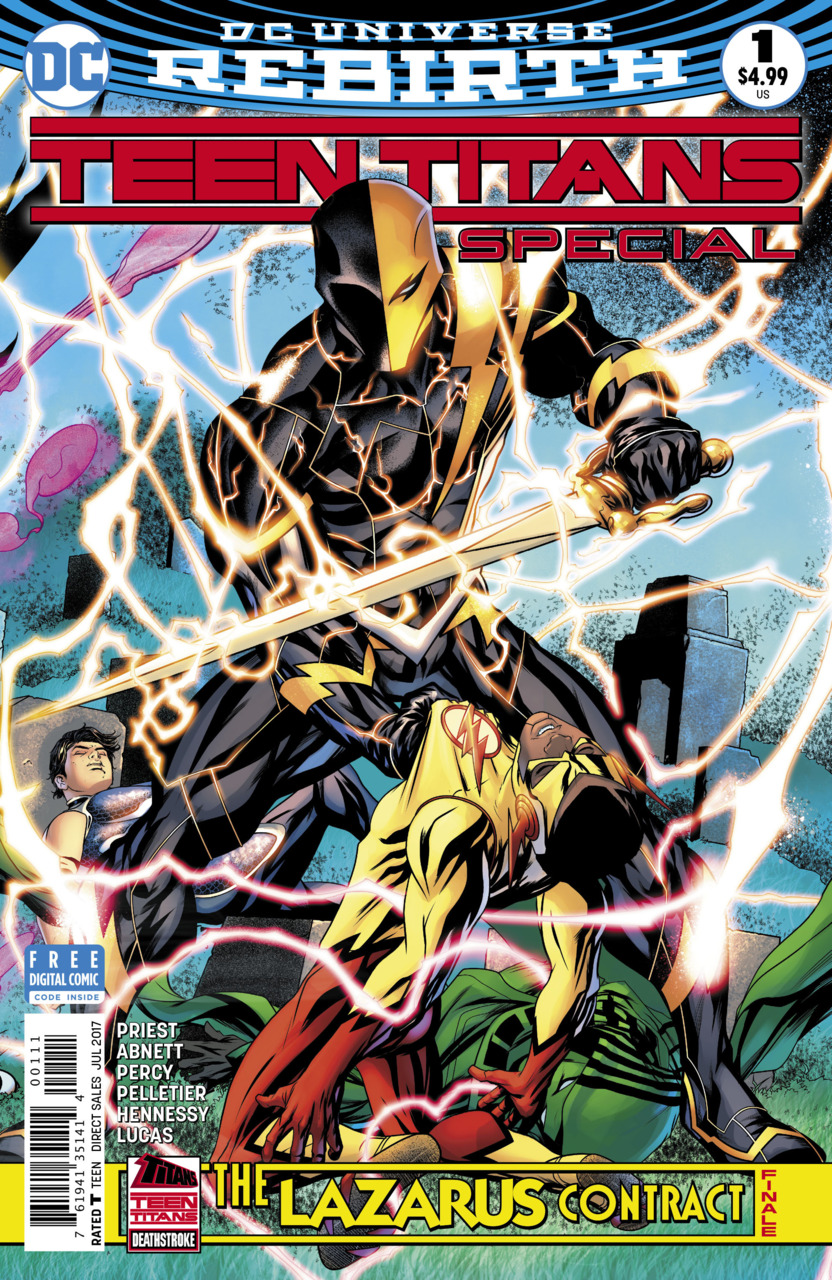 (Spoilers ahead) “The Lazarus Contract” comes to a close this issue. As we spanned across the pages of “Titans,” “Teen Titans” and “Deathstroke” this issue opens with a series of flashbacks showing what happened to Grant Wilson following the events we saw last issue when he ran away from home and his father: Slade Wilson (aka Deathstroke). Picked up by a group of young adults, we learn the group had been staking out the Wilson home, hoping to run into Grant eventually. Being brainwashed by his new “friends,” Grant is convinced to be injected with a serum to enhance his abilities and strength. Now working for H.I.V.E, the new assassin known as Ravager takes to the field against his new enemies: the original Teen Titans.

Flashing back to the past, the speedster Deathstroke grabs Ravager (we saw this at the end of last week’s Deathstroke #19) and runs him to a safe house in Vermont. As Ravager begins to have a fan boy moment in meeting his hero (Grant doesn’t know Deathstroke is his dad), Slade reveals his true identity to his son. As the tender moment escalates into an argument, Ravager suddenly begins to attack Deathstroke who easily knocks him down. Realizing that he has failed again, Deathstroke agrees to speed backwards in time farther in order to convince his son.

As we leave the past behind, the scene shifts back to the present with the Titans and Teen Titans assembled…still attempting to figure out how to stop Deathstroke from ruining the time stream. As the heroes debate in leaving Kid Flash behind for his culpability in giving Slade his speed powers, the heroes pile into the batplane and take off leaving behind Kid Flash and a forgotten Jackson Hyde (still not bearing the codename of Aqualad). Contacted by Flash and Jericho on route, the Titans arrive on Goat Island which sits across the bay from Hatton Corners. With the arrival of Wally and Joseph, Flash introduces Jericho to the others and explains his abilities and his suit which is of similar to one worn by Slade.

Meanwhile, other Wally and Jackson arrive in Jersey City and attempt to call in members of the Justice League including Barry Allen. Back with the other Titans, Flash (Wally) and Jericho attempt to recreate Deathstroke’s time jump in order to follow him through the time stream. Eventually succeeding, the Titans are suddenly met by younger versions of themselves. Suddenly striking the younger Kid Flash in the chest, Damian seizes upon the moment to alter time himself. As the Flash (Wally) begins to disappear due to his timeline being altered, Robin continues to lob flash bang grenades at the younger Titans…Damian’s plan is have Wally “die” for a few seconds, just long enough to disrupt his history and therefore disrupting Kid Flash’s (other Wally) history and thereby breaking the link between Wally and Deathstroke (confused yet?).

Back with Jackson and Wally (Kid Flash), Wintergreen pulls up and offers a ride. Cutting back to Slade, Deathstroke has yet again cornered a younger version of his son in an attempt to stop Ravager and save his life. However, time suddenly catches up with Slade and his speed his stolen from him. As he watches his son die in front of him, Deathstroke is pulled back to the present.

Giving some insight into Slade Wilson himself, Wintergreen talks to the boys as he drives. Slade had always struggled with intimacy, and as Wintergreen explains “having totally ruined relationships with his daughter and his surviving son, rather than simply saying ‘I’m sorry’ he concocts a scheme to change the past. Or, more succinctly, the entire planet is at risk simply because this man is incapable of hugging his children.”

As the younger Robin begins CPR on the younger Kid Flash, Dick succeeds in saving Wally and we can see (back in the present) that the other Wally’s (Kid Flash) stolen speed returns to him. As the temporal field surrounding the Titans, Teen Titans and the younger versions of the Teen Titans collapses, everyone returns to their proper timelines…however, with slightly altered histories that I’m sure will have repercussions to come.

Deathstroke suddenly appears…completely ballistic that the Titans have once again stolen his son from him and attacks with abandon (guess that deal between him and Dick doesn’t stand any longer?). Continuing to accelerate to return to the past (somehow Slade has directly tapped into the Speed Force), Jericho goes racing after his father in order to stop him. A sudden crash of lightening engulfs everyone and Deathstroke is gone with Wally (Flash) in his place. Explaining that Slade had accelerated so fast that he entered the Speed Force itself, Wally reveals that there is no way for Slade to return…essentially he’s gone forever. As the heroes celebrate their victory, Kid Flash (other Wally) arrives and berates the heroes over essentially celebrating the “death” of one of their enemies.

Realizing their fault, the heroes concoct a plan for Flash and Kid Flash to race into the Speed Force to retrieve Slade…Omen will cement a link between all the Titans/Teen Titans and connect everyone through Raven’s soul self who will take possession of Jericho who will possess Flash (Wally). As the plan begins to succeed, the connection through Raven begins to fail as she senses the Flash’s fear of the plan failing. As Jackson arrives, he tells Damian to use his friendship with Raven to calm her down…after a simply pat on the head doesn’t work, Damian whispers to Raven that her friends are waiting for her. With the connection re-solidified, Wally, Wally and Slade come bursting out of the Speed Force. As the heroes turn to potentially fight Deathstroke once again, Slade turns and takes off his mask stating that he is finished.

In a short series of epilogues we catch up with the aftermath of “The Lazarus Contract” which each group. As the Teen Titans return to San Francisco, Raven helps Wally control his shaking over his recent trauma; however Damian has different plans as he kicks Wally from the group for having helped Deathstroke. In New York, the Flash is being seen by a doctor who reveals the first major change in history…Wally has a pacemaker due to the trauma he received from Damian. Therefore, Flash will be unable to accelerate to his normal speeds or his heart could give out.

Another DC Comics crossover is completed and we as fans need to wonder whether this story can hold up to its predecessors.

As I stated in an earlier review, it was an easy connection to draw between this story and a similar event “The Judas Contract” that appeared in “The New Titans” under Marv Wolfman and George Perez. Now, unfortunately nothing could truly outdo this classic tale but it is sad to see how this story ended comparatively.

“The Lazarus Contract” started out pretty strong in my opinion, Deathstroke was seeking to change the past and save his son…something that seemed like it was grounded a strong family connection. However it was eventually revealed that Slade and Grant had a troublesome relationship and it was a little baffling to see Deathstroke going to extreme lengths to save his son.

Although it can be argued that a father doesn’t need a reason to help his child, it seemed like a mission destined to fail as Grant continued to pull away from Deathstroke every time in this issue.

Then we get into the name itself – Lazarus. For two issues Deathstroke and Nightwing made reference to a contract that was struck between the two of them. Part Three finally revealed this Lazarus Contract that would see Dick Grayson instilling his morals into Rose Wilson while Slade ceased trying to kill the Titans. If both held up their ends of the bargain then the turmoil would stop. However, that “contract” seems to be thrown out the window with the Titans (or more aptly Damian Wayne) change history to stop Slade from stealing Kid Flash’s speed. Eventually trapped in the Speed Force, the heroes concoct a crazily confusing plan to save the villain…they succeed and Slade thanks them by quitting.

Overall this storyline started strong and ended on a sad whimper. Deathstroke fails in his mission, gets trapped in the Speed Force and then has an epiphany that he shouldn’t be a killer anymore….what? Deathstroke is one of the greatest assassins in the world, and now he’s gonna walk away? Weak.

As for the Titans and Teen Titans, these guys spent more time arguing with one another then actually working together to fight the bad guys. In the end, Damian is the only to actually take charge (even if it was in an exceedingly arrogant way) and take action. However true to form, Robin never thinks before he acts and irreparably causes damage to Wally West’s heart and career as the Flash. As for the other Wally, Damian hands down judgement and kicks him off the team due to his actions.

Although I’m looking forward to seeing the fallout from the story and repercussions on the two teams, this story could essentially be skipped. Overall this story will probably rate a 2.5/5 as I did enjoy the first three issues, but was disappointed in the ending. The only consistency was the art throughout the story. There were some beautiful panels and great splash pages showcasing the heroes and Deathstroke. I liked the design of Deathstroke’s speed costume, a nice mix of the traditional Flash with some villainous flare thrown in. As always, connecting covers are a weakness for me so these four would make a great piece to hang on my wall.