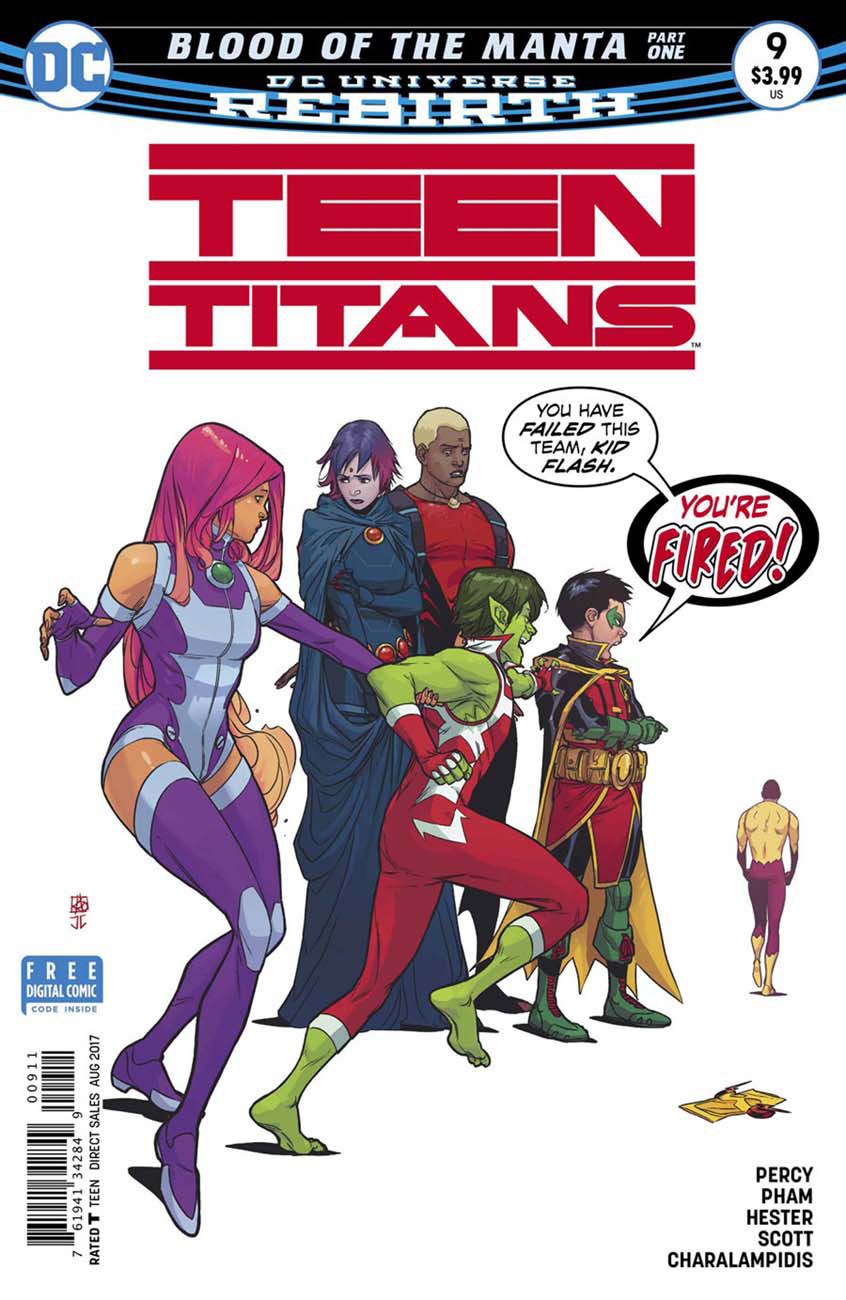 (Spoilers ahead) This issue opens in New Mexico where the mother of Jackson Hyde is frantically searching for her son. Suddenly a news broadcast comes on TV and describes the events seen in “The Rise of Aqualad” where the Teen Titans saved the hostages from the villainous King Shark…realizing where her son has gone, she heads out to San Francisco.

Meanwhile in the aftermath of “The Lazarus Contract,” Damian is busy training Jackson Hyde in combat…we see the hero utilizing his hydrokinesis against holographic Ra’s al Ghul. When Jackson moves in for the kill, Damian quickly stops the training session and states that heroes “don’t do that sort of thing.” While the two Titans discuss the team’s mutual broken families and dark pasts, Jackson reveals how his mother hid the identity of his father from him and has always wanted to know who he is. When Robin responds that people make their own ways and that their past isn’t what makes them who they are, Damian presents Jackson a bladder unit that can help channel his hydrokinetic abilities. Utilizing twin aquatic swords, Damian and Jackson begin sparring once more.

Cutting over to Central City, Kid Flash is busy thinking about recent events when Raven suddenly appears. Wally tells Raven how Deathstroke wants him to join a new team that he is forming, Raven attempts to get Kid Flash to come back to Titans Tower. The conversation evolves into a mixture of emotions between Wally and Raven when the two can’t admit how they feel about one another…frustrated Wally admits to considering joining Slade and Raven teleports away.

Back in the bay area, Jackson Hyde walks across the water towards a meeting with his mother. The two finally meet and discuss briefly Jackson’s past…however; his mother still refuses to reveal Jackson’s father’s identity stating that he is a murderer. As Lucia talks with her son, she reveals a secret that she had been hiding: Jackson’s powers weren’t inherited from his father, but from his mother. Lucia pours out a glass of water and manipulates it into an image of her son. Asking for Jackson’s necklace that he wears around his neck, Lucia states that she should have never let him wear it…however, he is quickly called away when a call comes through from the Teen Titans.

Across town, Starfire and Beast Boy are busy stopping a gang of robbers from fleeing a crime scene. As a t-rex tail smashes down onto the fleeing car, Starfire openly holds Beast Boy’s phone. Seeking to up his popularity online, Gar has been vlogging his super heroics. After Starfire dispatches the criminals, Jackson appears from beneath a manhole ready for a fight. Not needed anymore, Beast Boy and Jackson begin to argue over recent events, including Wally being fired from the team by Damian. Upset that being a super hero wasn’t all he dreamed, Jackson appears beyond upset and ready to leave his dream behind.

Nearing the end of the issue, Lucia is walking along the shore of Frisco bay when she is suddenly accosted by a villainous voice. Summoning a watery battle axe to defend herself, Lucia launches herself with a cry of “stay away from my son” towards Black Manta.

Week after week, “Teen Titans” continues to be one of my favorite titles to read. Benjamin Percy seems to understand each of the titled characters and has helped to develop each into an interesting person to read about. Robin/Damian continues to be a favorite of mine, and is just as annoyingly spoiled as he has always been. Taking an interest in Jackson Hyde, I find it an excellent road for Damian to travel down. Becoming a mentor is something that I’ve never seen or even thought of for the Boy Wonder…but he makes a decent one, albeit one that isn’t going to hold by physically or emotionally. I also like the development of the “no kill” rule in regards to Damian…it wasn’t long ago when he was introduced that he decapitated the Spook, took out Nobody and even killed off Wally West for a brief minute.

In regards to Jackson Hyde, I like that he is still trying to find his place on team. Some members resent him for gaining special treatment from Damian…I think this will lead to a brief fallout with the heroes as they learn to come back together following the events of “The Lazarus Contract.” In terms of the other Titans, I think that we have seen the last of Kid Flash…at least for a while. As seen over in “Deathstroke,” it looks like the young Wally West will be taking up with Slade Wilson for a while. Don’t know how this will affect Raven as she seemed rather putout and upset by his decision. Beast Boy continues to act as comic relief with his latest stint as a vlogger, but I’m a little disappointed in Starfire. Although she seems to be the eldest member, they have done the least amount with her so far…I hope that following this Aqualad arc (and yes, he still hasn’t officially been given a codename) they will help develop that princess of Tamaran further.

As for the big question “who is Jackson Hyde’s dad?” fans will need to look no further than the animated Young Justice television series or Jackson’s first debut in comics during the “Brightest Day” event. Black Manta has always been the father of this particular version of Aqualad and it will be interesting to see the team go up against a major big bad like him. I do like the focus on Jackson’s mother as this is new to his mythos…and I look forward to an epic battle between the two at the start of the next issue.

Percy and the resident artist Khoi Pham are continuing to do excellent work…although there was a slight misstep in terms of “The Lazarus Contract” I think that these two are back on point with some excellent storytelling and art.