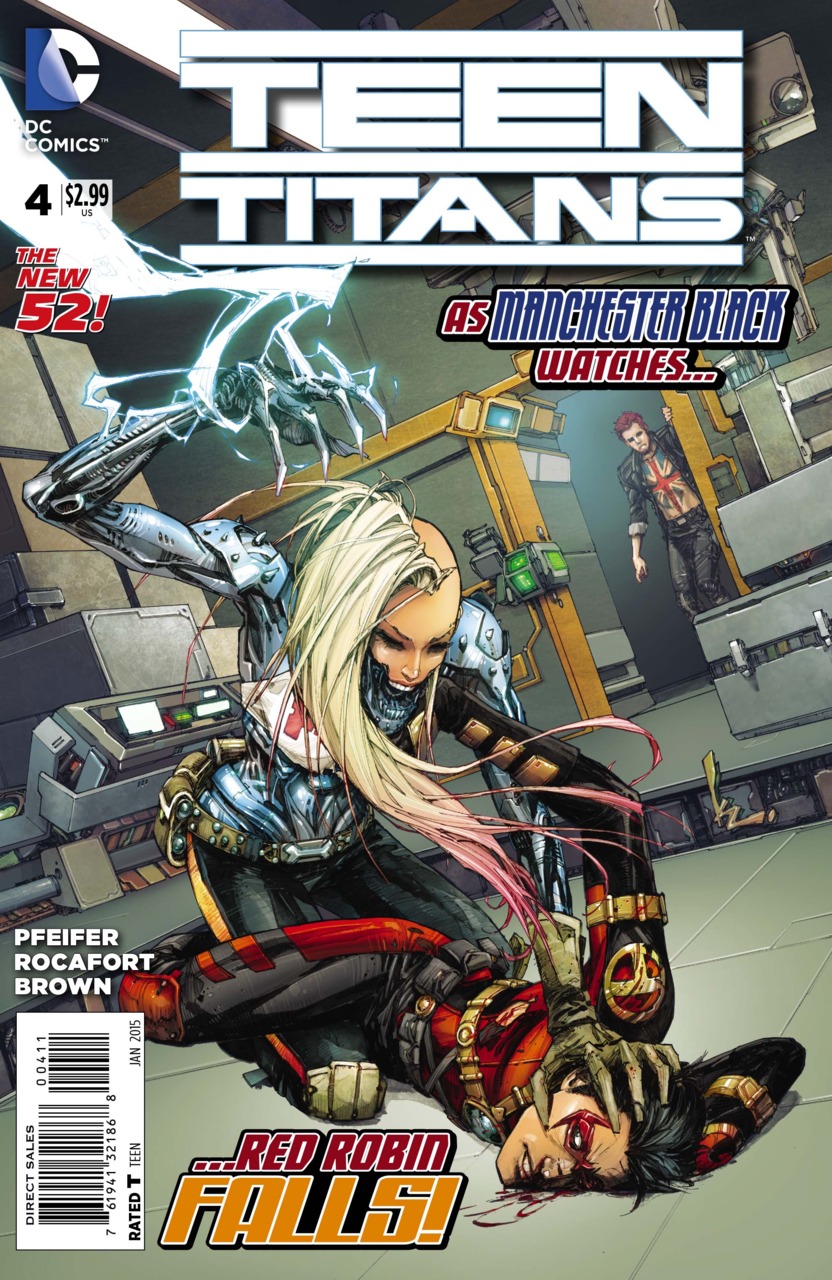 I will be the first to admit that I was not the biggest fan of the newest iteration of the Teen Titans. Initially I found the series to be bland with limited sensibility and a lack of depth. However, issue #4 in this series provides a glimmer of light in a world that had been previously troubled by mediocre story telling coupled with average artwork.

The story begins with Algorithm seemingly having the upper hand on Red Robin. Cunning detective work and a minuscule bit of luck allow Red Robin to evade Algorithm and make his way toward the basement. Robin believes that the basement holds the key to stopping the Algorithm’s threat.

A break from the action provides us a look into the more natural lives of Bunker, Wonder Girl, and Beast Boy. This scene is compelling in that it demonstrates the role that viral celebrity plays in our current culture. The panels between Wonder Girl and her mother are overshadowed by the fan club that arrives in Cassie’s honor. In a world riddled with Internet celebrities it is easy to relate to the plight that Wonder Girl is currently facing. Not seeking notoriety or fame, Wonder Girl is attempting to live a normal life while at the same time saving the world. Will Pfeifer does an amazing job of conveying Wonder Girl’s struggle utilizing the dialogue occurring between those around her. It would behoove the author to continue this trend of exploring the internal struggles of the Teen Titans. This will deepen the relationship and commitment the readers have to the characters.

In a turn of events, Algorithm is destroyed by her creator, Manchester Black. Additionally, we learn that Black was utilizing Algorithm in order to gain favor with the Teen Titans. If utilized effectively, Pfeifer could use this plot point in order to develop a story filled with intertwining story arcs that move us beyond the shallow story arcs in the first three issues.

The biggest problem I have with this issue is the lack of Raven. Throughout this series there has been a serious deficit in the amount of time we are granted to observe this character. Personally, I have always found Raven to be one of the most intriguing characters of the Teen Titans. Unfortunately, her presence has been as allusive as her personality during the genesis of the Teen Titans. I hope that this can be attributed to growing pains on the part of Pfeifer during this introduction period and that we see much more of Raven moving into the future.

The artwork by Rocafort and Brown is average at best. It regularly looks like a sketchbook that an inker gave to a friend to practice their coloring technique. The Teen Titans is a series dating back to the early 1960’s. The history with DC is full of great stories and exceptional artwork. As a staple of the DCU, I feel this series deserves a better crop of artists to give the book the attention to detail it deserves. I would encourage these artists to evoke the spirit of George Perez as they continue to illustrate this unique and dynamic fighting force.

Teen Titans has gotten off to a rocky start. However, providing depth to the storytelling and improving the art direction could make this a series that all DC fans wouldn’t dream of missing. For now we will wait to see if Pfeifer is able to take this series in a direction that warrants our attention.