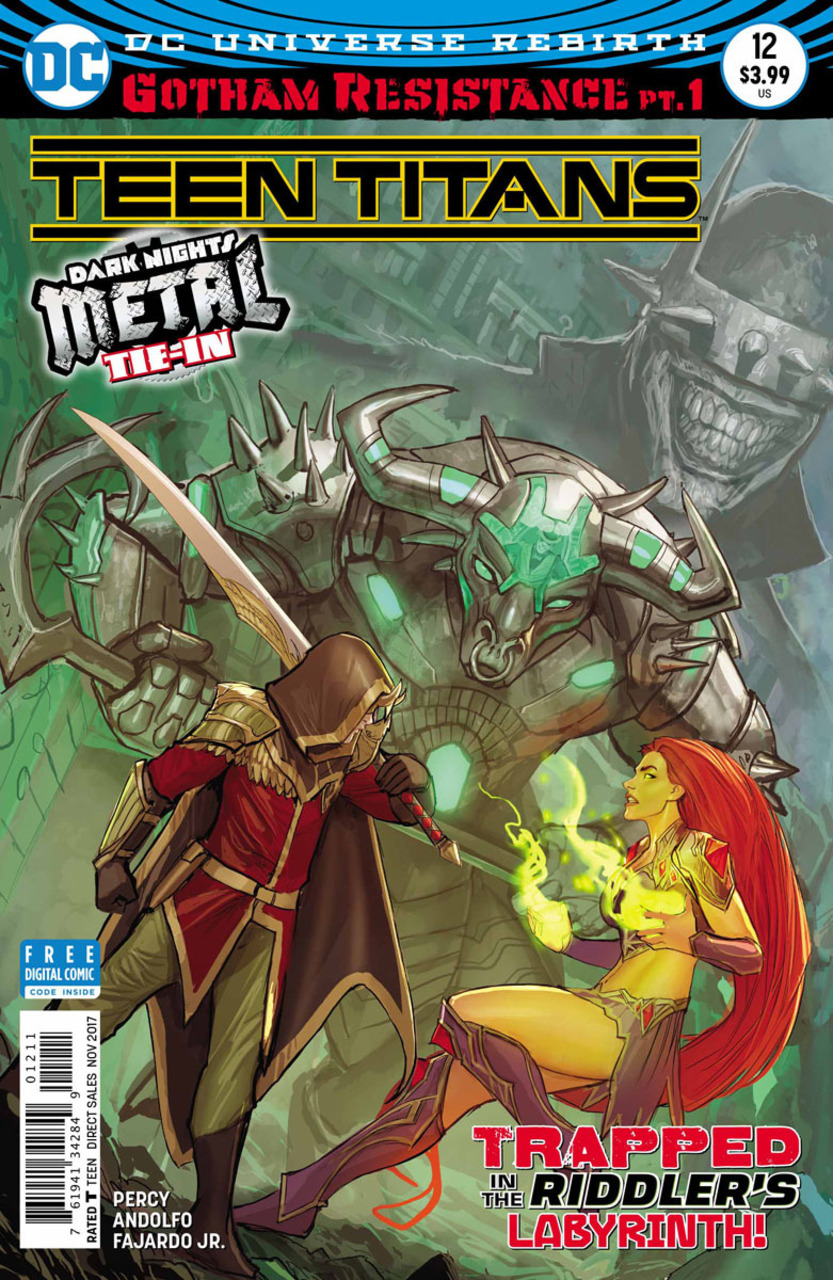 Overview: While the Teen Titans try to help the citizens of Gotham as they recover from the massive mountain that devastated the city, Damian heads in to a Labyrinth designed by the Riddler. Aiding him on his mission is Green Arrow, Harley Quinn, and Killer Croc.

Editor’s Note: This issue is part of the Gotham Resistance crossover between Teen Titans, Nightwing, Suicide Squad and Green Arrow taking place over the next four weeks.

Synopsis (spoilers ahead): Shortly after the disappearance of Batman and the arrival of his twisted Dark Matter versions of himself, the Teen Titans head to Gotham to see what can be done to help. Damian feels that it is up to him to make it to the heart of the city and save his father. The rest of the Teen Titans don’t seem to share his confidence or viewpoint.

Once they descend from the clouds, the team is horrified to see Gotham torn apart from the Dark Multiverse mountain as well as newly formed rings that seemed to encircle and trap the entire city. Shortly after entering the city, the team starts to help out the frightened citizens. Robin gets a reading of dark energy from a particular direction. The team tells Robin to help them with the citizens but he pursues the energy on his own. He enters a door with question marks on it.

Once inside, Robin finds himself surrounded by complex and dizzying changes to his surroundings. The Riddler announces to Damian that he is the one in charge of the maze and challenges him to reach the center of it. Damian almost falls into a death trap, but is saved by Green Arrow. The pair make their way through the maze and eventually come face to face with a zombie Batman which is quickly destroyed by Harley Quinn and Killer Croc. The pairs agree, begrudgingly, to join forces to find the Riddler.

They eventually find the Riddler who is in a giant mechanized suit. He is the last thing to block their exit and offers a final riddle. While the group fights Riddler, Damian solves the riddle and breaks the energy that is giving Riddler the power.

On top of Challengers Mountain, in the center of Gotham, The Batman Who Laughs states how disappointed he is with Nygma, but that the next ring and villain will be more difficult for the heroes.

The issue ends with Robin reuniting with Nightwing as he is chased by a giant, killer snowman.

Analysis: Despite being a decent tie in for the Dark Nights Metal crossover, I have to say this was extremely disappointing as a Teen Titans issue. We literally get a few panels with the team (and they really were not even together then) and then the story follows Damian completely. This would not be so bad if they had not brought in other heroes and anti-heroes to aid Damian in the Riddler’s labyrinth. I can’t really understand why the creative team would use a team dynamic without the actual main cast for this title. It is something that annoyed me more and more as I read each panel. I’m sure the team will come together to help Damian in the next ring but, for now, I am just frustrated why a team oriented book did not utilize its own team for the issue.

Artwork by Mirka Andolfo was good and did do a solid job at creating the disorienting setting that was the Riddler’s Labyrinth. My only negative I pulled from the artwork was that Green Arrow looked a little too young for how I always see him. Understandably, this is very nit-picky which is more evidence the art team was really my only positive takeaway from this issue.

Final Thoughts: There seems to be a consistent complaint over crossovers and their tie ins recently in the New 52. This issue brings those complaints to the forefront with a story that didn’t include the cast of the title book but puts them aside to serve the overall plot of the event. This does not make for better stories but detracts and harms the quality of the individual title that is brought into the event. Hopefully, the future tie in’s for this event will enhance the event but not at the expense of the individual titles.