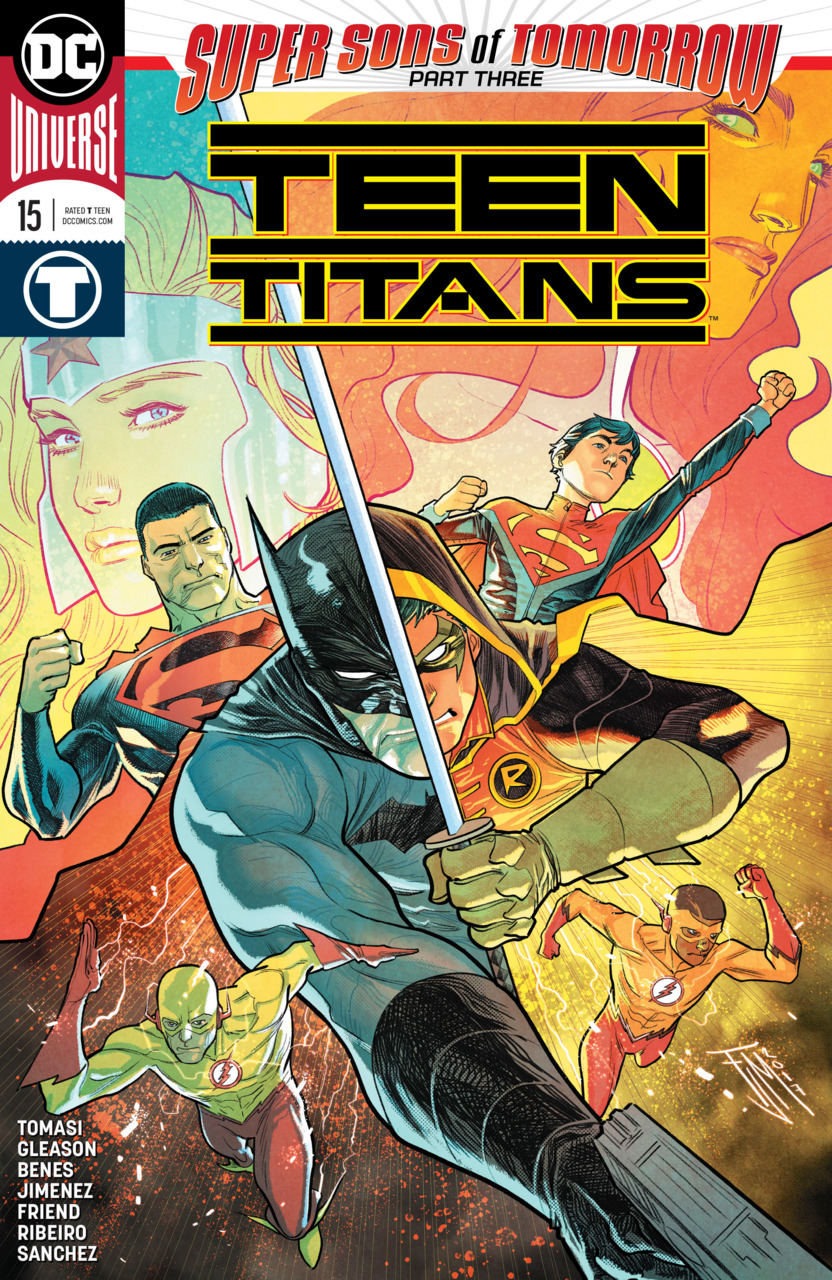 Overview: While the team contemplates joining Future Tim in stopping Superboy, Damian secretly takes Jon away from the team to locate their fathers and find a solution to Jon’s uncontrollable solar flare ability.

Editor’s Note: This is the third part of the Super Sons of Tomorrow crossover that takes place in many TBU titles. The story started in last week’s Superman #37 and Super Sons #11 and continues in next week’s issue of Superman #38.

Synopsis (spoilers ahead): Set just after Superboy’s solar flare, the team is still unconscious from the blast. Damian begins to wake up and search for Superboy. Using his tech, he starts to pinpoint Jon’s first location underwater. Meanwhile, Future Tim beings to raid the Titans armory for prototype suits as his was destroyed in the blast. He is able to piece together pieces of armor together and assembles a new suit and a new codename of “Savior”.

Elsewhere underwater, Damian recovers Jon in a submersible and begins to send out a distress signal to both Batman and Superman. Damian explains to Jon the solar flare ability and how Superman (New 52) used to have it as well. Jon is scared of losing control again and blames himself for what happened at Titans Tower. Robin disagrees and tells Superboy that it was Future Tim’s fault for pushing him to the edge. Damian tells Jon he will not let him lose control again because they are friends, much to Jon’s surprise.

In the future, the Titans examine the time machine that Tim had used to get to the past and hoping that he is not damaging the past. Connor discusses with Bart & Cassie about how Tim’s obsession with the past has made him unstable.

Back in the present timeline, the Teen Titans wake up and discuss the threat Superboy has become. Future Tim, “Savior”, explains why this is the reason Jon needs to be “stopped” and that Damian needs to be terminated if he gets in their way. The team is divided and begins to argue when a rip in the time stream begins to pull Future Tim back to the future Titans. The future Titans try to bring Drake back but Raven intervenes and splits to the team into those that would join Savior and those against him.

Analysis: Despite a lack of action that was seen in the previous parts of the crossover, the third part puts the brakes on and delves into more character driven moments between Damian and Jon along with some shifting loyalties within the Teen Titans themselves over the situation. Tomasi and Gleason pull back and show us how close Robin and Superboy are becoming. We see Damian, who once was so suspicious of Jon he kidnapped him to study him, now willing to go against his team potentially to protect him. You can really see the lengths he is willing to go now for his friend. We have not seen Damian have these kinds of relationships throughout the run of the character so it is satisfying to see that happen.

We also get to see Future Tim abandon the Batman persona and rename himself “Savior”. It was interesting to see the future Titans searching for him and acknowledging that he has become delusional. It has created a very intriguing subplot of whether or not Future Tim has been telling the truth at all about the future or whether he is just insane. It will certainly make for a good reveal when the Future Titans face off with the current Teen Titans (at least I hope so). The suspense left off with which members will join Future Tim feels real and earned with what they had just seen Superboy do with his unstable solar flare ability.

Artwork continues to deliver here with some smaller, quieter moments of Damian speaking with Jon or Future Tim laying out his cards to the Teen Titans. It was also good to see the looks of the Future Titans and how we might imagine the future of the team looking. Although not particularly an artistic comment, the look for future Superboy (Superman?) showed that it was Connor Kent and not Jon so we may be getting some foreshadowing on what may happen to the pre-New 52 Super-family eventually.