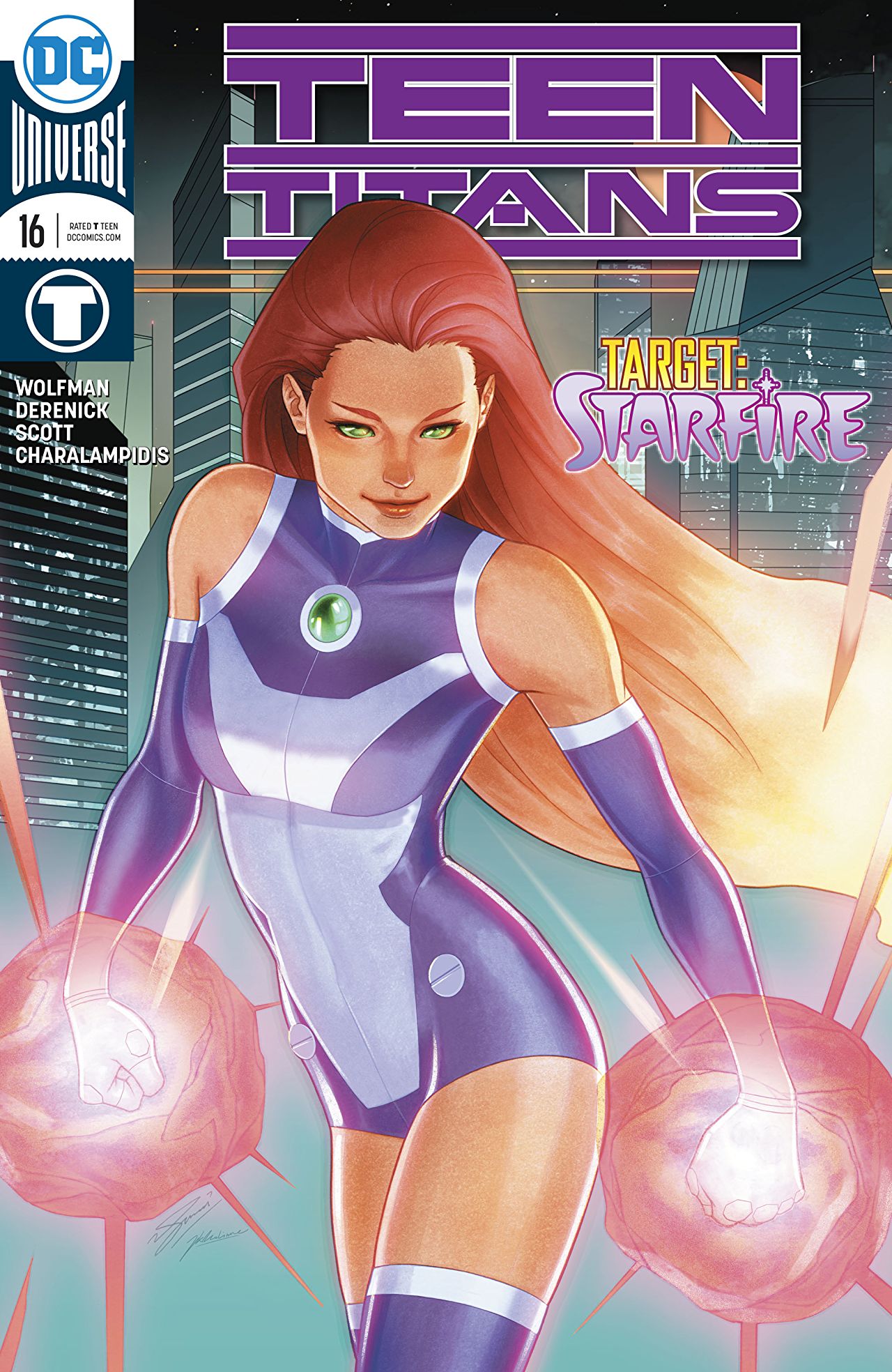 Overview: After defeating a villain with Beast Boy and Raven, Starfire feels rejected for being too old for the team. Alone, she has to battle an enemy from her homeworld, the Psions.

Synopsis (spoilers ahead): The issue opens with Starfire, Beast Boy, and Raven battling the villain Mammoth. While they attempt to subdue him, unseen enemies are spying on Starfire and note her increased solar absorption will aid them in their tests. The trio eventually are able to overpower Mammoth and Raven banishes him to another dimension to await imprisonment in A.R.G.U.S. After A.R.G.U.S arrives to handle the prisoner, Kory overhears Garfield whispering to Raven. Embarrassed when asked, Beast Boy refuses to reveal his conversation. Frustrated with being told she could not understand “young people talk,” Starfire flies off into the city.

While flying through the city, the unseen enemy unleashs cybernetic bugs to possess civilians and attack Kory. During the attack, she is able to capture a possessed citizen and takes him to a hospital to be helped. The surgery goes wrong, however, and the cybnetic creature forces Kory outside to face another wave of attackers. She is eventually overtaken and knocked unconscious.

Starfire awakens in a laboratory being worked by some of her old enemies, the Psions. They are attempting to understand her powers better and plan to subject her to pain and torture as they have in the past. Kory refuses to allow herself to be tortured and imprisoned again. She unleashes a blast of energy to free herself. Shortly after freeing herself, she has to come face to face with Raven and Beast Boy, who have been possessed by the aliens’ technology as well. Not long after their fight begins, she is able to beat them down.

The issue ends with Kory reuniting with her healed friends and Raven banishing the Psions to a dark dimension. She discovers that the whispering of Beast Boy earlier had only been about his dating profile and he had been too embarrassed to tell Kory about it.

Analysis: Although not an issue that includes the entirety of the team, I was very pleased with how this single issue story tackled some bigger themes of growing up while still managing to throw in a few action scenes.

The catalyst for the drama in this story has such relevance to any teen when they are on that edge of being “too old” for other friends. Wolfman writes the set up perfectly with a few whispers of her peers creating extreme doubt as is the case in many teenagers. Although older, Starfire does not confront the problem, but ends up learning a bigger lesson for it. Kory’s real enemy in this issue was not really the Psions, but her own immaturity. The overall story did not really interest me except for the first few pages and the last two where Kory is dealing with her fellow teen teammates. It could be argued she had to battle the Psions to reach a new level of maturity but, in the end, any conflict that she had to face alone would make her realize that she should have just been open and honest with her friends.

Penciller Derenick’s artwork supported this coming of age issue with some dynamic fight scenes and some pretty interesting sci-fi images. The way he drew the cybernetic hybrid people was very creepy and unsettling in certain panels. Also, the look of the Psions was very sci-fi and could have been campy, but they did come across in the artwork as cruel, alien mad scientists.

Final Thoughts: Overall, the story did not lend itself to a multiple issue arc, so I am glad Wolfman and creative team were able to deliver an important coming of age story for Kory while keeping it engaging and entertaining.