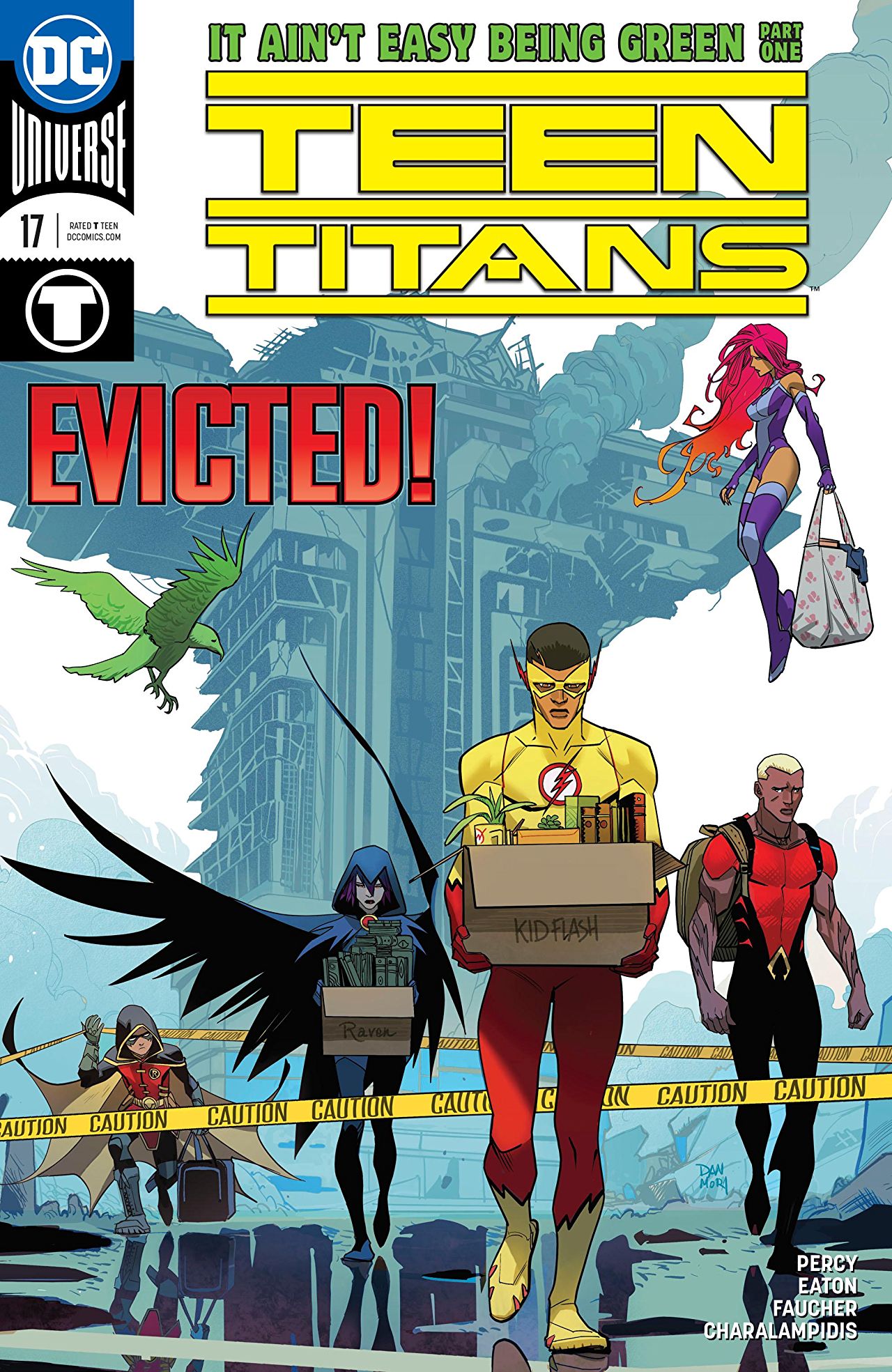 Overview: Despite the team’s tower being destroyed, many try to move on and look to the future. A disgruntled Beast Boy becomes entangled with a dangerous tech group called the Lost Boys.

Synopsis (spoilers ahead): The issue begins with Gar talking about his family and home that he had lost when he was young. He had always wanted another one and felt like he found it in the Teen Titans. The destruction of the tower at the hands of the future Tim Drake left the team shaken but Beast Boy was taking especially hard. He believes that nothing can ever last in his life. Despite his teammates’ many attempts to cheer him up, Gar decides to go solo for awhile and flies away.

Meanwhile, on the Golden Gate Bridge, a school bus is traveling and we see a young boy getting teased by some bullies. Suddenly the boy’s eyes glow purple beneath the gamer shades he is wearing. He then throws the bus driver out of his seat and proceeds to drive the bus off the bridge. Damian is quickly alerted to these events and the Teen Titans spring into action. They use their assorted skills to bring the bus and all the children to safety.

At a nearby baseball park, Beast Boy prepares to throw the opening pitch for the professional game. After a few insults from the players, however, he instead transforms into various large animals and hurls the ball into the catcher which breaks his hand. Sulking as he leaves the field amidst the boos from the crowd, Gar is approached by a girl who asks him to come with her.

Outside the city, Gar finds himself aboard a floating ship and entering what the girl calls Neverland. She introduces her “Lost Boys” as well as reveals her true form behind the hologram she was utilizing. She asks Beast Boy to help them spread a new technology given his social media presence and influence.

In the hospital, this new technology is discovered in the head of the child behind the bus accident. Damian subtly calls it “bleeding edge” technology given its novelty can result in potentially deadly situations.

Back in Neverland, Beast Boy agrees to take on the new gadget which he inhales into his brain. Within moments he feels the new power of the device and forgets all about his former teammates. He distinctly addresses the device as “you” when yelling that it is all he needs.

Analysis: From the fact that Beast Boy is a teenager, this angsty and pouty attitude seems pretty much in character with that of a growing teen who has undergone trauma. The only problem I have with this is the fact that he is the source of comic relief on the team by all accounts. Having him take such a drastic turn feels pretty erratic (which I guess can be a trait of a teen at times). Overall, this was not the Beast Boy I am used to seeing which was jarring but perhaps what Benjamin Percy was going for. The angle of him joining a dangerous, social media focused tech company does seem to fit in with how Beast Boy has been portrayed in the Rebirth era.

The artwork was solid in this issue and helped to convey the whimsical nature of the Lost Boys’ Neverland. I know the characters are teenagers but I always liked seeing Beast Boy portrayed as the youngest member. Here he looks like a grown teenager in his facial features.

Final Thoughts: Overall, an interesting start to this new arc focusing on Beast Boy. The creative team is utilizing current technology to present conflicts to a social media-centered character. Looking forward to seeing how this story will play out.