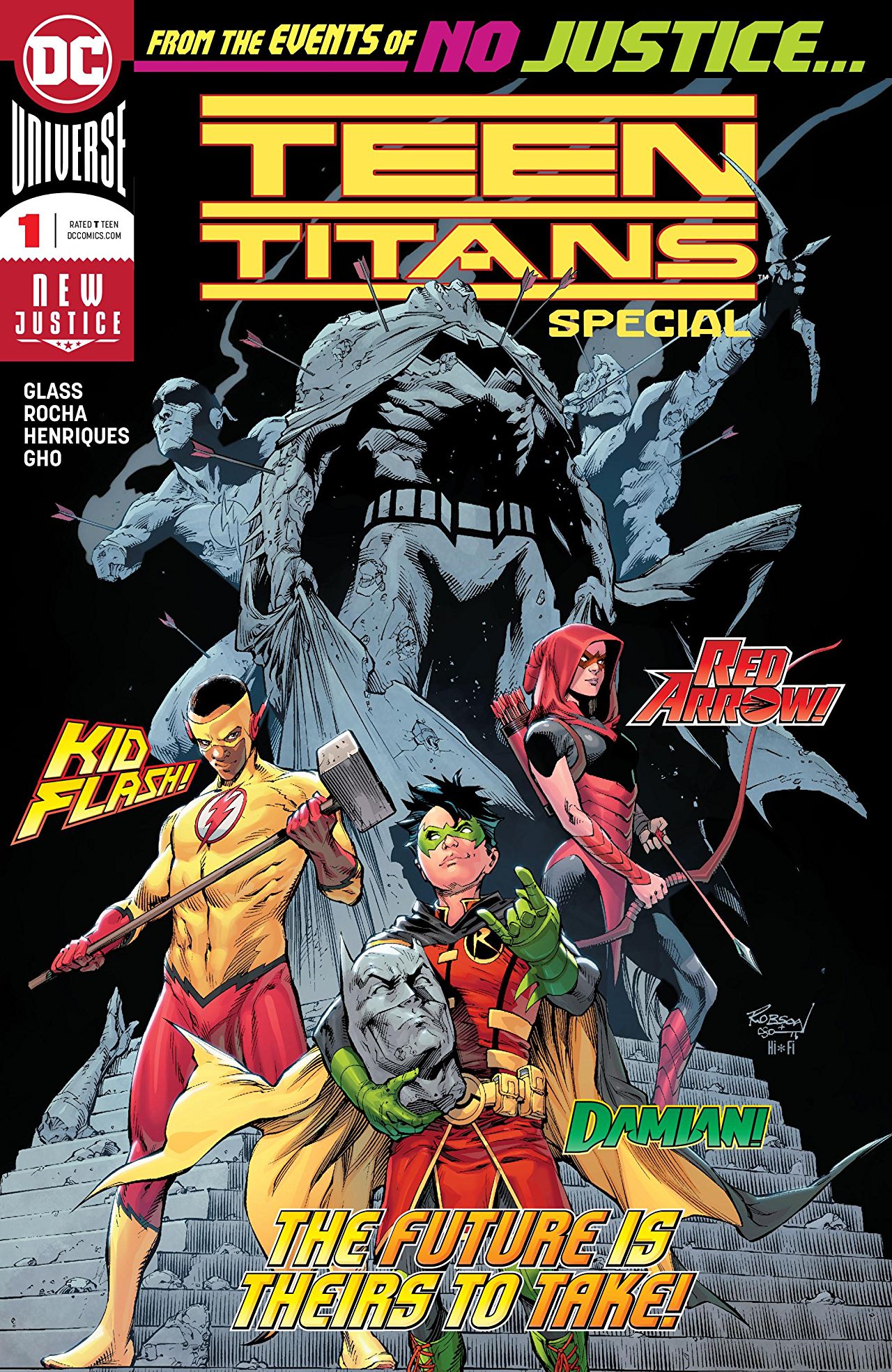 Overview: A collection of three mini-stories featuring Robin, Red Arrow and Kid Flash that highlight their problems with the current status quo.

Synopsis (spoilers ahead): Robin is chasing a criminal down a Gotham alleyway. The story flashes back an hour to show Damian grabbing a meal at his favorite family-owned, Middle Eastern restaurant in Gotham. He notices a group of thugs barge in and take money from the cash register as “protection money”. He suits up and takes them down in the kitchen. Unfortunately, it was not a simple shakedown as the thugs have rigged the place to explode. The restaurant is destroyed in the blast and one of the owners is tragically caught in the blast and dies.

The story returns to the criminal being interrogated in the alleyway and he tells Robin that he works for Black Mask who has got out of Arkham on a technicality. Robin is furious and goes to interrogate Black Mask who happens to be enjoying his night at a sauna. He tells Black Mask that he’s taken out all his thugs and he holds Black Mask’s gun up to his face. We hear a shot go off but it’s unclear if Robin shot him.

The story shifts to Red Arrow in the midst of a battle with Shado. Red Arrow noticed that two healthy politicians died under suspicious circumstances and upon investigation learned that Shado was the killer. She was able to deduce Shado’s next target which led to the current confrontation. Shado is able to escape the fight.

Emiko decides to switch tactics and goes to a global exchange conference in her civilian identity to stop her mother. She talks with Shado on the balcony and Shado lectures Emiko on the dangers of sentimentality. Emiko tries to appeal to her mother’s heart and asks her to renounce her life of crime. Shado admits that she loves Emiko more than anything and gives her a hug. But the hug was just a cover to get close enough to Emiko to use an arrowhead to fatally poison her. Emiko knows she only has three minutes so she runs to a bathroom and jams the arrowhead into an electrical socket to give herself an electric shock. When she comes out of the bathroom, she finds another politician murdered and no sign of Shado anywhere.

The story shifts to Wallace West enjoying a vacation on a beach in Santa Monica. He sees an explosion further along the coast and goes to investigate. It turns out Harley Quinn and El Diablo are trying to apprehend a woman. Kid Flash frees the woman and gets her out of the way but he’s hit by a fireball from El Diablo. As El Diablo goes to get the woman, Harley fights with Kid Flash. El Diablo returns with the girl but she glows briefly before she triggers an explosion. The explosion is contained by the arrival of the older Wally West much to the delight of the people in danger. Harley shows Flash a paper from Amanda Waller and Flash tells Kid Flash to stand down and let the Suicide Squad take the woman. Kid Flash is not happy about this but cannot do anything to stop it.

The two go for a meal to talk over their differences. Kid Flash is not happy with the Justice League’s cooperation with the Suicide Squad and he’s not happy with Barry’s mentorship. Wally tells him to be patient and accept that there are things he doesn’t understand because he’s still a teenager. Kid Flash is still upset even after the meal and speeds off after saying that he’s done asking for permission. He placed a tracer on Harley during their fight and tracks it down to an abandoned yacht. He finds the woman dead and the tracer on the table with a note from Harley telling him that she noticed the tracer.

The story shifts back to Robin talking to himself about being a hero in a different way from Batman and the Justice League. He decides to put together a team to make this dream a reality and we see quick panels of each of the prospective members: Red Arrow, Kid Flash, Djinn, Lobo’s daughter and Roundhouse.

Analysis: This issue definitely exceeded my expectations and was a pleasure to read. I opened it up expecting an unfinished story that would serve as the backdoor pilot to the upcoming soft reboot of the series. What I got instead was a story that not only sets up the soft reboot but is also very character driven and gets to the heart of why some of these sidekicks feel like they need their own team. It doesn’t accomplish this by only relying on teenage angst and difficult relationships with parents. It also goes beyond that by being a reflection of some of the inter-generational tensions that exist in the world today.

Robin’s story is one that is deeply personal to him. I think he feels a deep sense of kinship to the immigrants who own the restaurant because they’ve both chosen to settle in Gotham and make a life for themselves. They both have difficulties in their past that they’re trying to move past and I think he relates to their struggle on some level. I think he also sees them going through it as a family and he’s happy for them but also slightly envious because he knows it’s something he will never have himself. The script doesn’t explicitly say any of this, but it does a great job conveying it through human interaction and giving us a window into Damian’s thoughts. With this in mind, the attack that destroyed the family’s business and killed the man takes on an extra level of significance for Damian. Not only does he feel personally attacked, he’s also angry that people who have been through so much and worked so hard have had their dreams shattered. Like all teenage boys, it’s natural for him to experience mood swings and Black Mask happens to be the target for his pent up anger in this case. I do not think Damian has gone back to killing again, but I do think he’s now mature enough to start seeing faults in the adults in his life. Whether he’s mature enough to do things better than they have, is something we will have to find out in the next issue, but I’m sure there’s plenty of learning and growth ahead.

Emiko’s story in this issue was the “weakest”, for lack of a better word, of the three. While that may be true for this issue, I think there’s enough here to show me that she could be the most interesting character on this team moving forward. To me, her story here is of a child who has been forced to look after herself but still holds out hope that her parent can reform themselves to be a part of their life. The story has the feel of a spy thriller with fancy parties and politicians being assassinated, but the one great moment is the conversation Emiko has with Shado on the balcony. I don’t have much exposure to these characters outside of the Green Arrow series after Rebirth, but I was touched by the sincerity of Emiko’s plea to her mother. I was equally shocked when Shado simply poisoned her like that. The way Shado tied it back to the lecture she gave Emiko on the dangers of sentimentality also really hint at the trauma Shado has gone through on her dark path and why it’s so difficult for her to change.

I want to take a second here to mention the art in this book. I thought it was decent throughout and probably strongest in the Robin story. While I thought it was good, there were some panels where certain body parts seemed a bit oddly shaped. I also thought some of the finer details and contours on the faces could have been a bit more defined. It’s only noticeable in really emotionally charged moments such as Emiko’s conversation with Shado and Kid Flash talking to Flash towards the end of the issue. I think more detail in those key moments would have made them even more powerful. That being said, there are certain panels where this isn’t a problem such as the closeup of Emiko coming out of the bathroom to see her mother’s victim bleeding out on the floor. There was also a really clever use of lettering in the panel where one of the thugs is firing a gun at Robin. The sound effect breaks up the panel to show Robin’s sequential movement as he evades fire and closes in on the thug.

I really liked Wally’s story because it deals with a teenager trying to understand the complex realities of the world around him. In this case, that means understanding why the Justice League tolerates and cooperates with the Suicide Squad. I think the frustration Wally expresses with the status quo really reflects the frustration many young people have with the world today. It seems like right and wrong are pretty obvious concepts, at least they are raised to believe that, but they are frustrated to discover a world that is all different shades of grey. In some ways, the kids are right and their frustrations are warranted. Too often it seems that things like “the rules” and bureaucracy get in the way of what’s right. But as the older Wally tries to explain to his younger namesake, this does not mean that things like compromise and diplomacy are worthless. It’s important for the Justice League to compromise and work with other groups because their power means that they have a responsibility to do so. Without this approach, the Justice League would set up a hierarchy of power with themselves at the top. That’s what makes the tension in the discussion between the two Wallys so great; they both have valid points. There’s definitely more for Kid Flash to learn but it’s also valid that the Justice League may be giving the Suicide Squad too much free reign.

Final Thoughts: A delightful issue that re-introduces key members of the Teen Titans while giving readers something more than just a primer for what lies ahead. A wonderful look into the minds of three sidekicks at crucial points in their careers. I wish there was a second special to introduce readers to the other lesser known members of the team, but I guess that will just happen in the next issue.