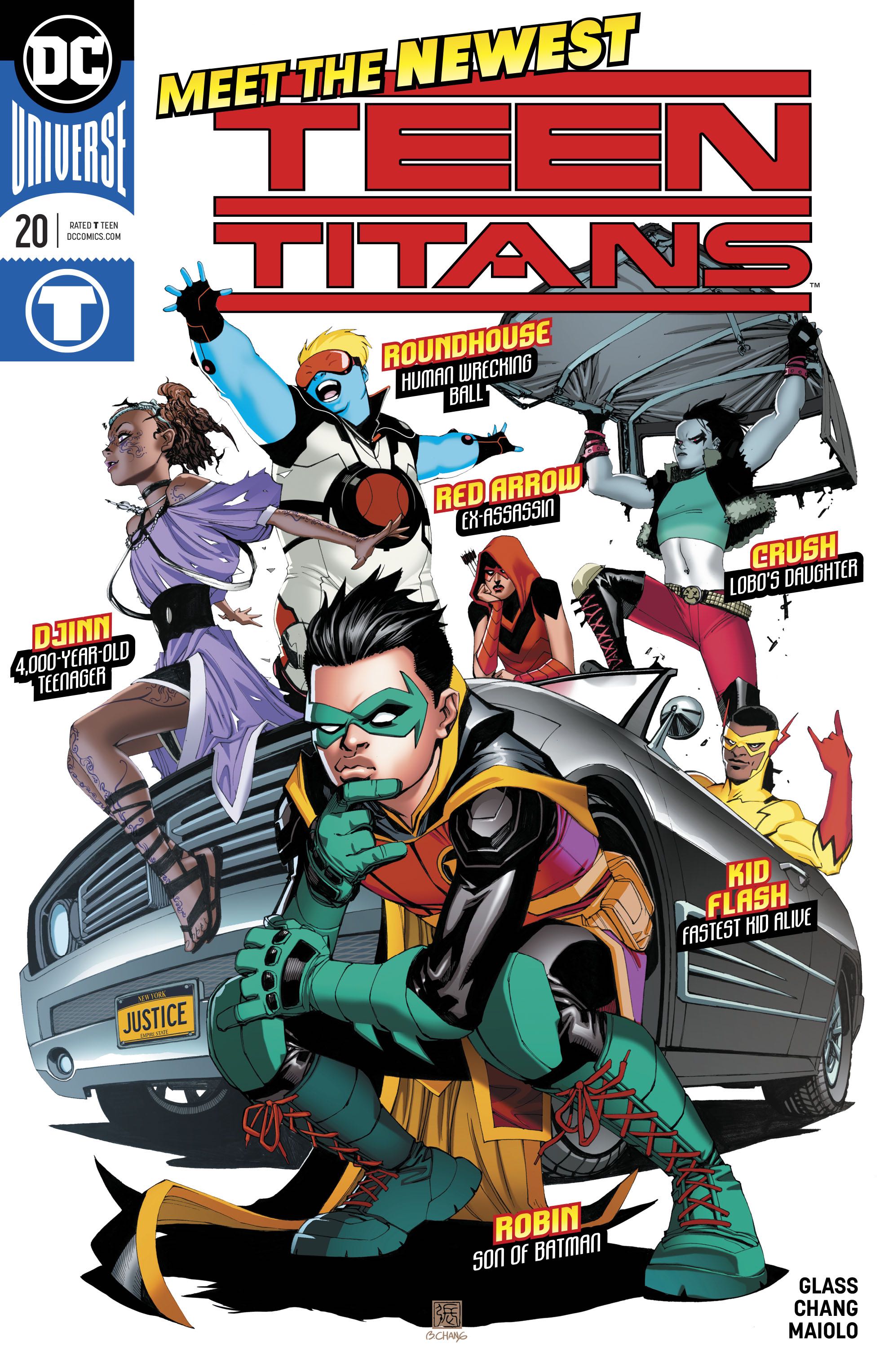 Overview: The new Teen Titans go through their first mission together and find signs of a potentially bigger threat to come.

Synopsis (spoilers ahead): Brother Blood is on the cusp of making a human sacrifice but before he can complete the ritual, he is interrupted by the Teen Titans. As they work together to save people and apprehend Brother Blood, we see how Robin recruited members of the team through flashbacks.

The first member he approached was Wallace West. Wallace appears to be hesitant at first, but he agrees to join on the condition he has more of a say this time. He also shows Robin a video of someone on ViewTube. In the present, Kid Flash takes out some of Brother Blood’s acolytes and even manages to take selfies with his phone. His fun is interrupted by Red Arrow firing an arrow through his phone because he is unfocused.

Red Arrow was the second member of the team that Robin approached. She is outright dismissive of a “kid’s club” but agrees to join after Robin says he can show her something about “The Other”.

Back in the present, she uses an electric arrow to shock Brother Blood. Meanwhile, Crush uses Roundhouse as a bowling ball to knock down a crowd of cultists. One of the cultists fires an RPG at an unsuspecting Red Arrow and Robin but they are saved by Kid Flash. While Kid Flash is carrying them away, Robin explains to Red Arrow that he let Roundhouse join the team because Kid Flash recommended him. Privately, Robin wants to get rid of Roundhouse the second he can. As Crush tries to punch her way through a purple force field, Robin thinks back on how he convinced her to join. She was fighting at an underground fight club and agreed to join when Robin said he could help her find the killers of two people who are probably her foster parents.

The force field is actually a magical field created by Djinn who has locked herself in the room with Brother Blood. Brother Blood tries to absorb her power, but it ends up backfiring on him as she overpowers him. Before Djinn can finish taking him down, she suddenly gets scared about using too much power and revealing her presence to a mystery person. Roundhouse then launches himself into Brother Blood and Robin finishes him off with a kick to the head.

As they grab an unconscious Brother Blood and leave, Robin reflects on how he met Djinn. She was taking care of many stray animals at an abandoned building. While the Titans are leaving the Church of Blood, they discover a mark left by someone Robin refers to as The Other and Robin says it has been at every raid the Titans have conducted over the past month. The Teen Titans evacuate the building and blow it up with dynamite as they leave.

The Teen Titans are back at their base, Mercy Hall, enjoying some downtime. While the rest of the team are tensely bonding, Robin drags Brother Blood to a place deep under Mercy Hall. He’s using the depths of Mercy Hall as his own personal prison where he is holding various villains including Black Mask.

Analysis: This was a very busy issue that works in a few different plot threads to establish the foundation of the Teen Titans series moving forwards. The fight against Brother Blood provides the action in the issue but is perhaps also the least important part of this issue. While the Teen Titans special issue did not feature the more unknown members of the team, this issue gives us a bit of background on each of them and how they were recruited by Robin. While it was absolutely necessary to acquaint readers with the new team members, the downside of doing it all in one issue is that we don’t learn much about any of them. I’m sure they will be explored more in subsequent issues.

I’ve been really impressed with Damian’s progression here. I remember the time where he thought everyone was beneath him and that he didn’t need a team. Here, he seems to be taking on a leadership role in bringing a team together. He’s still cold and calculating but also showcases charm when he needs to (recruiting Djinn for example). While he has matured a bit, he’s still a teenager who thinks he knows better than the adults. His brutal methods of holding people captive in his own personal prison will no doubt eventually be a source of friction within his team and with the Justice League in the future.

It’s too early to say how this team will function together but I think there is some potential here. That being said, nothing in this issue really made me like any of the new members. Djinn seems to be the most intriguing; she hints at a dark past and the full extent of her powers are unknown. She does have an awkward moment towards the end of the issue when she changes her appearance to become white and blonde to appear “less disturbing”. I didn’t really understand what that was about. I am also not really a fan of Lobo having a daughter and Crush just seems to be a younger, more articulate version of her father. She claims to hate her father but I’d like to see how she is different. Roundhouse is the character I liked the least in this issue. He has an interesting gimmick by being a ViewTube superhero, but a lot of his dialogue is just really awkward. He also drops a Vanilla Ice reference that I don’t think any teen in 2018 would get. To be fair, there is a more modern reference from Roundhouse towards the end of the issue when he asks Wallace about dating the actress Millie Bobby Brown who is very popular amongst teenagers. Speaking of references, fans of the Justice League vs. Teen Titans animated film will no doubt appreciate the inclusion of the Dance Dance Revolution style game that Wallace plays at the beginning.

The larger plot to this series seems to be their impending conflict with the mysterious entity called “The Other”. While I like that there is going to be a larger game going on and not just a different villain every issue, I really wish this new villain wasn’t so generic.

The art in this issue works well for a Teen Titans book. Chang’s pencils give the issue a sleek, modern look that will no doubt appeal to younger readers. It manages to be edgy without being too dark. Maiolo’s colors also really make each page stand out and crackle with energy. Leigh’s lettering also contributes positively to the issue and is very important considering how many action or power related panels there are.

Final Thoughts: A slower and more conservative story than the Teen Titans special issue. It doesn’t take many chances, but it establishes the team and sets the stage for the main antagonist going forwards.