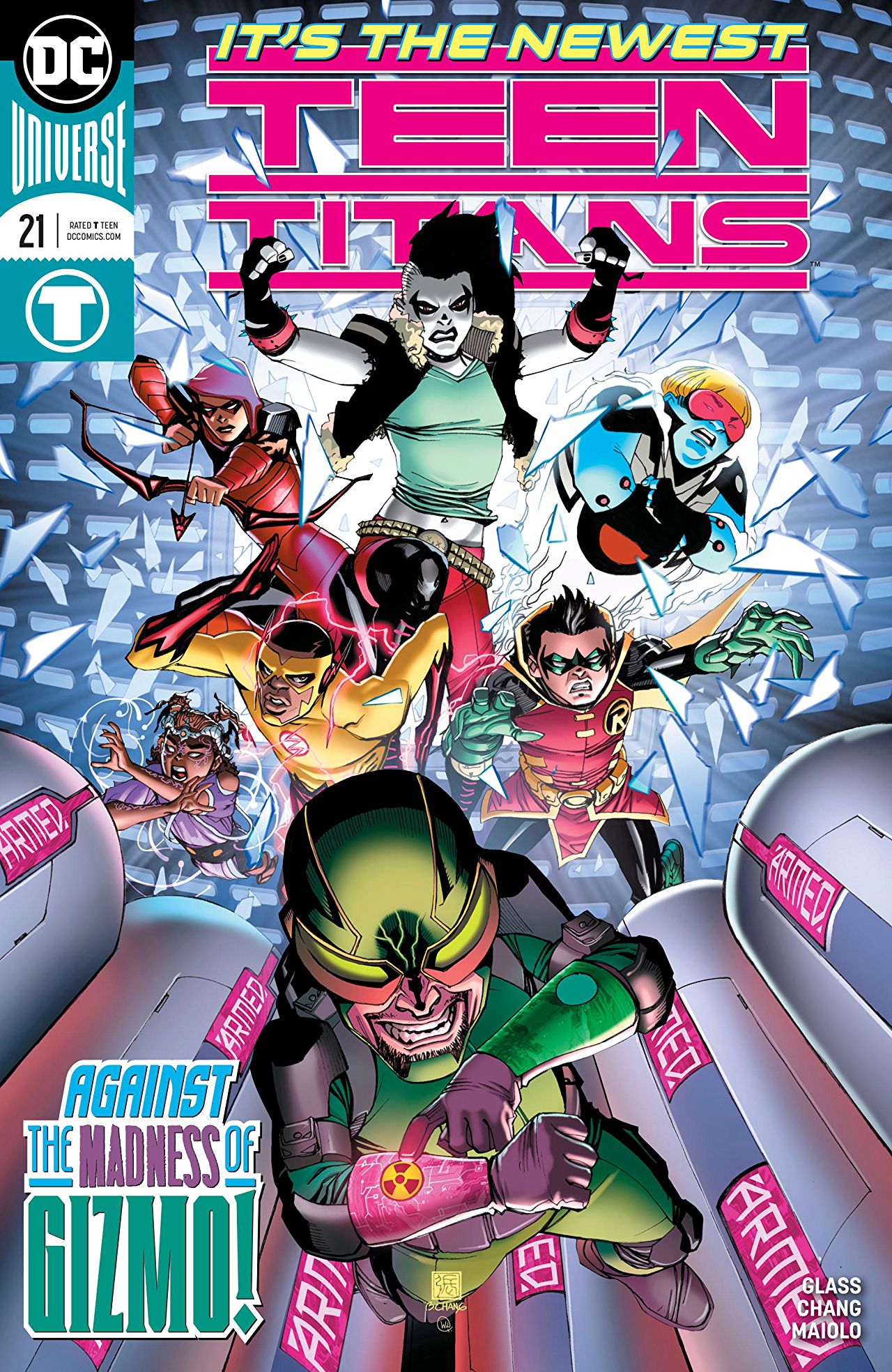 Overview: Set on a mission to prevent crime from happening, the Teen Titans infiltrate Gizmo’s toy store to lock him away.

Synopsis (spoilers ahead): Narrated by Roundhouse, the issue opens with the Teen Titans infiltrating Gizmo’s toy store. Robin, in his quest to stop crime before it happens, believes the former member of the Fearsome Five is using his store as a front.

Jumping out from a box, each member of the team attacks Gizmo separately. In the end, he gets taken down in a combined effort from Robin and Djinn. Before they get to take Gizmo’s unconscious body out of the factory, an alarm sounds and a countdown to self-destruction initiates.

Robin gets the team into motion, part of them on evacuating the store and part of them tackling the bomb. Djinn, Crash, and Roundhouse decide to evacuate the store by scaring the customers with a giant dragon summoned by Djinn. In the warehouse, after doing a complete search in under one minute, Kid Flash finds no bomb, leading Robin to deduce that it is Gizmo himself who is set to explode. The plan, therefore, shifts to having Kid Flash run with Gizmo to the middle of the ocean so that no one could get harmed in the explosion, but he disagrees with it. Kid Flash wants the plan to not involve killing Gizmo in the process. Djinn, sensing there’s no other option, reveals that she can take possession of Gizmo and search his mind for the location of the bomb and how to deactivate it. After they find the bomb – which, as it turns out, is a nuclear bomb – Roundhouse takes it upon himself the task of getting rid of it.

Analysis: Standing between a one-and-done and a slow-build, the second issue of Adam Glass and Bernard Chang’s run on Teen Titans suggests that their narrative style of choice will be to develop closed stories within one issue while still having one overarching plot. Similar to the structure of episodic television series, this style fits the Teen Titans title incredibly well, considering its target audience is young people who might be picking it up for the very first time. There is no need for the reader to have been following the title to understand the plot contained in one issue, but still, there are hints to the overarching plot which might pick their interests.

And pick their interests it will. Establishing a hesitant, close to an antagonistical relationship in the team while still having specific pairs with a share of affinity makes the team believable. In contrast with the initial roster DC had for the Teen Titans in Rebirth, this is a group that is much more believably under Damian’s guidance. Even with half of the team being older than him, he is still the most experienced out of them all – except, maybe, for Emiko Queen, Red Arrow. Accordingly, she is to one who is constantly questioning his leadership and his decisions.

Not only are the characters less experienced and therefore more fit to be under the guidance of a thirteen-year-old boy, this is also a brash group of people. Except for Roundhouse and Kid Flash, which play the comic relief and the moral compass respectively, the other members make Damian seem like a gentle bird by comparison. Not only that, the work of Glass and Chang together makes all of the new characters seem like they have been around for ages. There’s no trace of hesitance in their strokes, and Chang seems to be having the time of his life drawing Roundhouse, the most expressive face of them all, even if wearing shades.

Final Thoughts: With a narrative structure that allows for anyone to jump on and off the title at any moment and a new team that works to Robin’s strengths as a character, Teen Titans seems to be going in a very good direction after the ups and downs of the previous run.