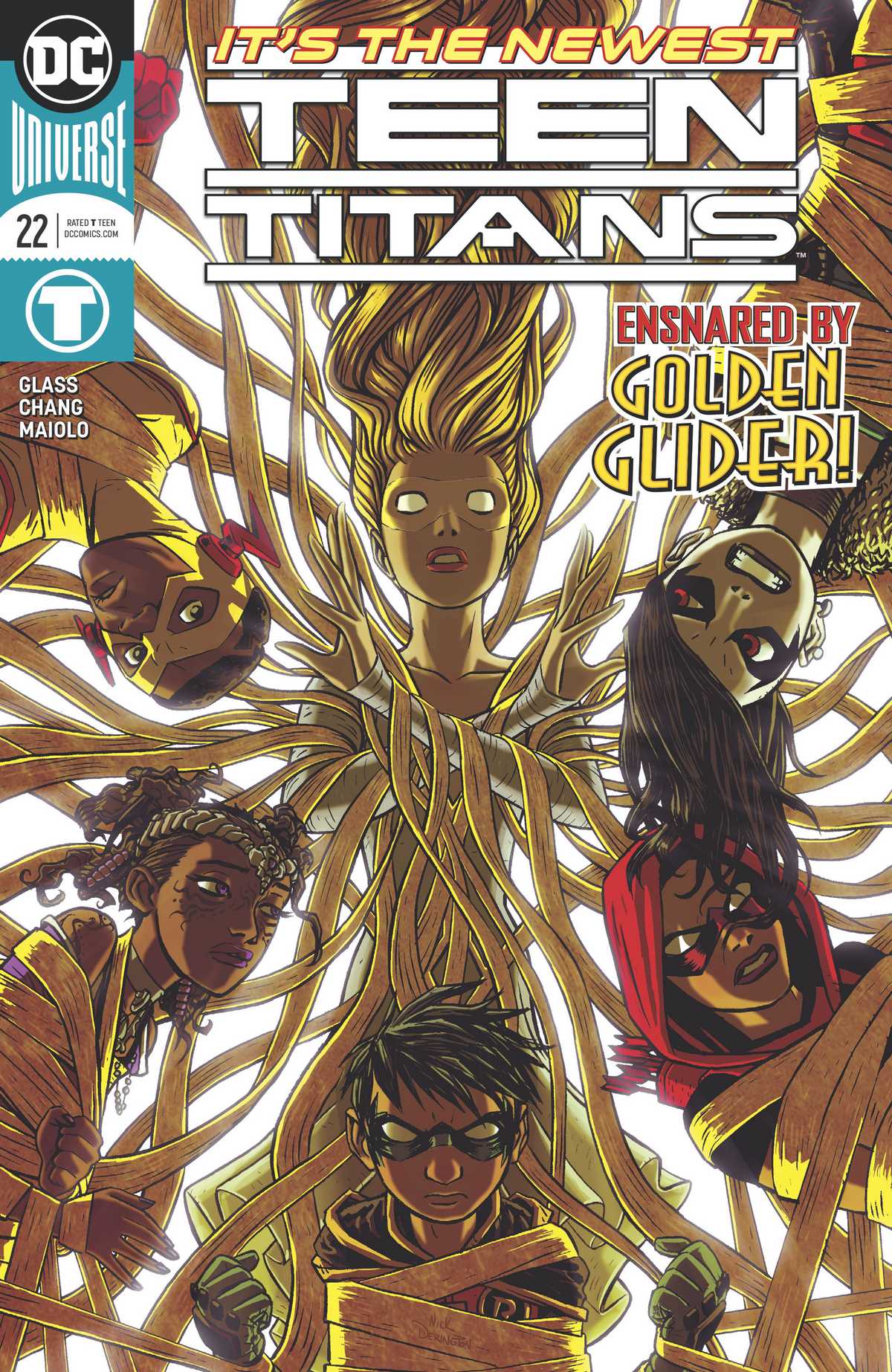 Overview: The Teen Titans try and cope with Roundhouse’s death by training to become a more cohesive team. The team also deals with a robbery at a hospital and Robin has a secret meeting with a former tire thief.

Synopsis (spoilers ahead): The Teen Titans are on a rooftop confronting an angry woman who has a gun to a hostage’s head. Flashback to earlier in the day, the Teen Titans are at Mercy Hall mourning the loss of Roundhouse. Kid Flash and Crush get into a fight over how to process and mourn when Red Arrow breaks it up by saying they all need training. She takes the team for a training exercise in the courtyard and singlehandedly beats them all because they operated as individuals instead of as a team. Red Arrow says when the team is ready, Robin will join in the training.

Meanwhile, Robin is in his prison interrogating Black Mask about The Other and using threats against Black Mask’s illegitimate son as leverage to get him to talk. Black Mask says all he has his stories, but he has some other information that is unrelated to The Other.

The information is regarding a robbery that will take place at a children’s hospital and Robin brings the team in for a stakeout. Crush and Red Arrow spot an armed, camouflaged intruder at the hospital and Robin tells Kid Flash to do some recon but not to engage. Kid Flash thinks he can stop the intruder so he disregards Robin’s orders and tries to wrestle the gun away from her. Golden Glider appears through a wall with a bag of stolen medication and uses her powers to take down Kid Flash. Unfortunately for her, the rest of the Teen Titans arrive and she flees leaving the intruder, Swerve, alone with the Teen Titans.

The team catches up with Swerve on the roof where she is holding a nurse hostage. Swerve attempts to explain her actions to the team but Red Arrow isn’t buying it and she fires an arrow that yanks the gun out of Swerve’s hand. The team is able to get to the nurse, but the arrow knocks Swerve back off the roof. Crush leaps after her and catches her while Djinn uses a thick bed of roses to break their fall.

Later in the night, Robin has a meeting at the docks with Red Hood. Turns out they’ve been working together. Red Hood explains that there’s a hit out on Commissioner Gordon and that figuring out who is behind it could lead straight to The Other.

Elsewhere, Kid Flash realizes his head hasn’t been in the game and decides to go tell Roundhouse’s family about his death before he goes on a brief vacation. He knocks on the door to their house and it’s opened by none other than Roundhouse himself.

Analysis: I tried to keep the synopsis as short as possible because there are a ton of things that happen in this book. I love that Robin and Red Hood are working together. Both of them have been written recently as having a penchant for not following rules and doing things their own way. Robin’s prison is definitely something the Red Hood would approve of, but it feels like all hell will break loose once one of the big guns finds out about what he’s doing.

The strongest aspect of this issue for me was the nuanced conversation Glass was able to bring out with Swerve. The Teen Titans learn the difference between pure evil and someone who is pushed to do bad things because of the hand that life has dealt them. Glass is able to make the reader feel sympathy for Swerve, but he also offers the counter that choices still matter regardless of the hand life has dealt you. As Red Arrow points out, that’s the difference between the Teen Titans and someone like Swerve. But at the same time that doesn’t mean all Swerve deserves is a prison cell. Instead, what she needs is help and support to break free of the bad choices she has made and return to he good person she used to be. It’s also an interesting way to subtly question and examine Robin’s decision to be judge, jury, and executioner.

I really like the dynamic between Red Arrow and Robin. Glass writes it perfectly where Robin is still the team leader, but Red Arrow is able to talk to him as a peer and hold him accountable when she thinks it’s needed. The rest of the team is coming together slowly. I like that they are forced to acknowledge that they haven’t really become a team yet and are just a group of individuals. With time and training, they will grow into something greater than they are. What I’m not buying is the emotional reaction to Roundhouse’s death. While it’s always difficult when someone dies, it’s not like they knew each other for a very long time. Wally is understandably more upset, but I fail to see how it’s his fault that Roundhouse “died”. I also don’t know why Roundhouse would just disappear and let his team think he died. In any case, I think this specific subplot would have held more emotional weight later on when readers have more of a connection to the new characters.

The art is good and definitely fits the vibe of a teen book. Chang strikes a balance between being too light and being too edgy and Maiolo’s colors complement it well. I really liked the use of the irregular shaped panels during the fight in the hospital to depict quick changes in point of view during an action sequence. Bennett as always is on point with the letters.

Final Thoughts: The Roundhouse subplot lacks the emotional resonance it should have, but Swerve and the team growing together make this an issue that is worth a read.