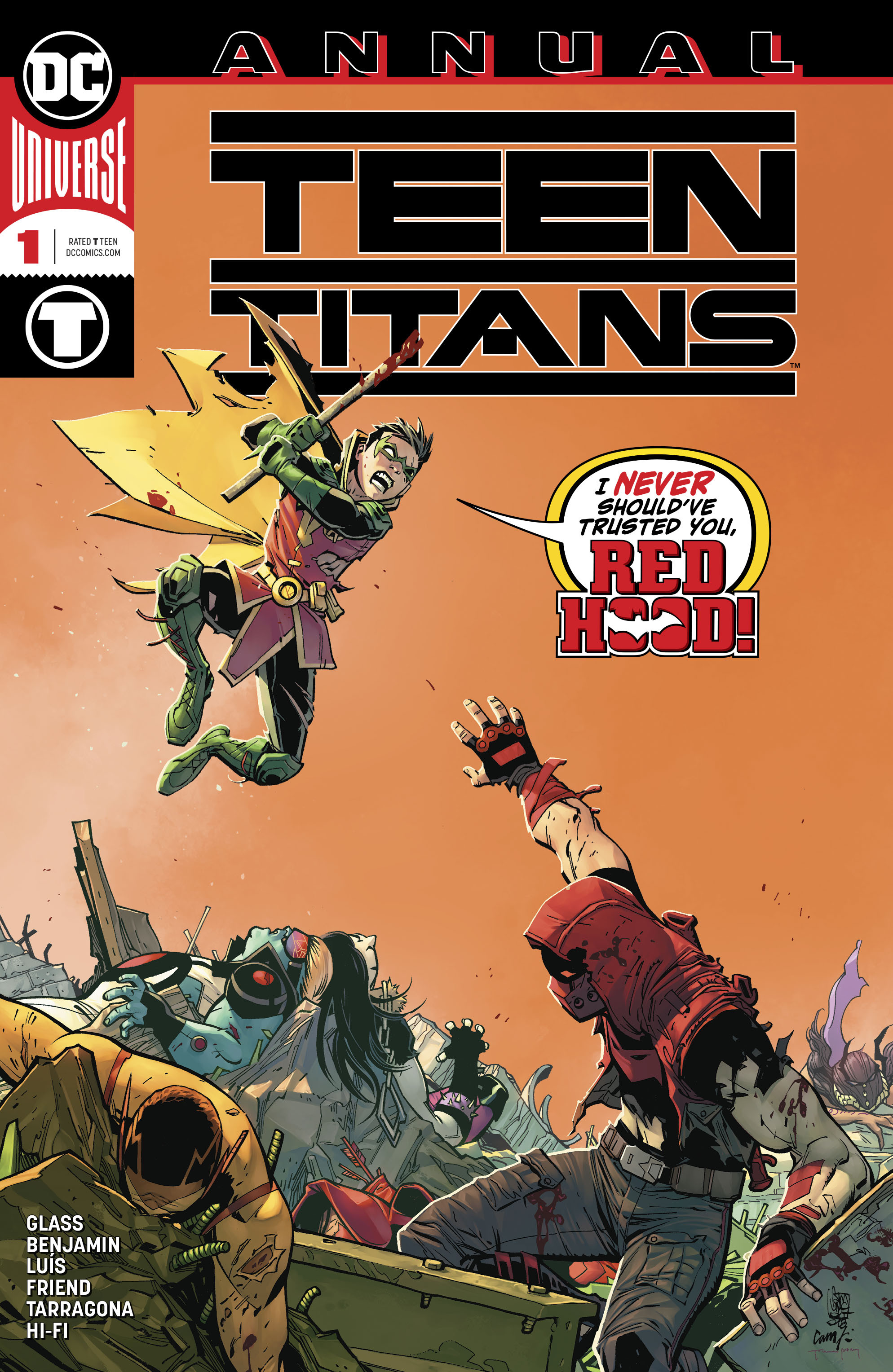 Overview: A two-part story featuring Robin confronting Red Hood about The Other and the rest of the Teen Titans responding to a distress call at a local mall.

Synopsis (spoilers ahead): Damian arrives at a bar in Texas to talk to Jason Todd about the Teen Titans recent mission.  After some tense conversation and a few probing questions, Damian believes Jason is feigning ignorance about what happened to his team and he starts a fight with him. As the fight goes on, Robin gains the upper hand and threatens Red Hood with the box he stole from the Batcave in the previous issue.  This seems to defeat Red Hood momentarily, but he strikes back with a renewed fury.  Red Hood gains the upper hand and delivers a brutal beatdown on Robin.  In desperation, Robin reveals a bomb strapped to his chest under his costume but Red Hood calls his bluff.  As he grabs the box and walks away, Red Hood reiterates that he’s not working for The Other and warns Robin that the Teen Titans better stay away from him or else.  The story concludes with a panel of the back of a chair with the mark of The Other facing a screen with the pictures of all the Teen Titans.

Meanwhile, in the second story, Joystick goes to a mall in Brooklyn and starts mind controlling a whole bunch of people.  Back at Mercy Hall, Red Arrow watches from a distance as the rest of the team goes through training drills.  As she watches, she silently goes over her assessments of each of their abilities and what she thinks of them.  The team notices her watching and she reluctantly praises them, much to the team’s delight.  Roundhouse then gets an alert of what’s happening at the mall and the team decides to go check it out.

At the mall, all pandemonium has broken loose as Joystick has made everyone fight each other in a twisted imitation of a video game.  The team tries to take him down, but they go in too quickly and this leads to disastrous results.  Djinn is controlled by Joystick and made to fight the rest of her team.  With her immense power, the fight is quite one-sided.  As Joystick makes her fight, he also uses her to talk about how she really feels about each of the team members.  Djinn eventually seizes control by mentally distracting Joystick long enough to allow Red Arrow to use the ring to control her and break Joystick’s control permanently.  As the team recovers, it’s clear that some members still hold some resentments and doubts about what Djinn was made to say.

Djinn eventually pays a solo visit to Joystick in prison where she magically removes his mouth to prevent him from telling anyone the truth about her past.

In the epilogue, Robin arrives back at Mercy Hall heavily wounded from his fight with Red Hood.  Djinn carries him inside.  Crush sees this and punches a car in frustration as Djinn’s mind controlled words echo in her head.

Analysis: This annual doesn’t take many chances, but offers a decent supplemental story to the main storyline right now.  The Robin and Red Hood encounter was quite anti-climactic.  It went about as anyone would expect it to go.  Red Hood was never going to be tied to The Other and Robin and Red Hood will never be allowed to fight in a comic book with a definitive winner.  I was also disappointed that we didn’t get to see what was in the box Robin stole from Wayne Manor.  Given that all of the previous issue was dedicated to the mission to attain it, it would have been nice for readers to find out what’s in there.  Since Red Hood took the box with him, we are unlikely to ever find out.  My other critique of this first part is that it takes up a little less than half the total issue and nothing really happens aside from the stalemate and denial we all expected going in.

While I didn’t really enjoy the first part, the second part was closer to what we’ve been seeing in this series.  There’s some good insight into how Red Arrow feels about the team and there’s more character development with Djinn.  We also get to see the team tackle a villain who embodies the worst stereotypes of male gamer culture so it was nice to see them laugh at Joystick’s expense.  Bonus points for the panel showing Red Arrow valiantly try to maintain her stoic demeanor and hide her laughter behind her hand.

The biggest thing that happens in this story is how it gets closer to Djinn’s past.  We know Djinn has a special aversion and fear of being controlled by someone and we see that anger her and motivate her to regain control from Joystick.  But it also seems that she was scared of Joystick revealing secrets of her past to her team.  She manages to regain control right before he can do that and later magically removes his mouth so he cannot talk.  Crush seems particularly affected by what mind-controlled Djinn says as the words still stay with her later on in the issue.  It’s new for Crush to have friends, and Djinn might be her best friend right now, but it seems she might have to learn how to be ok with that not being the same for Djinn.  Lots of interesting development and revelations to come.

The artwork is decent although I have become accustomed to Chang’s artwork with this book.  I think the lettering in the second part and the colors in the first part really stood out in a positive way.