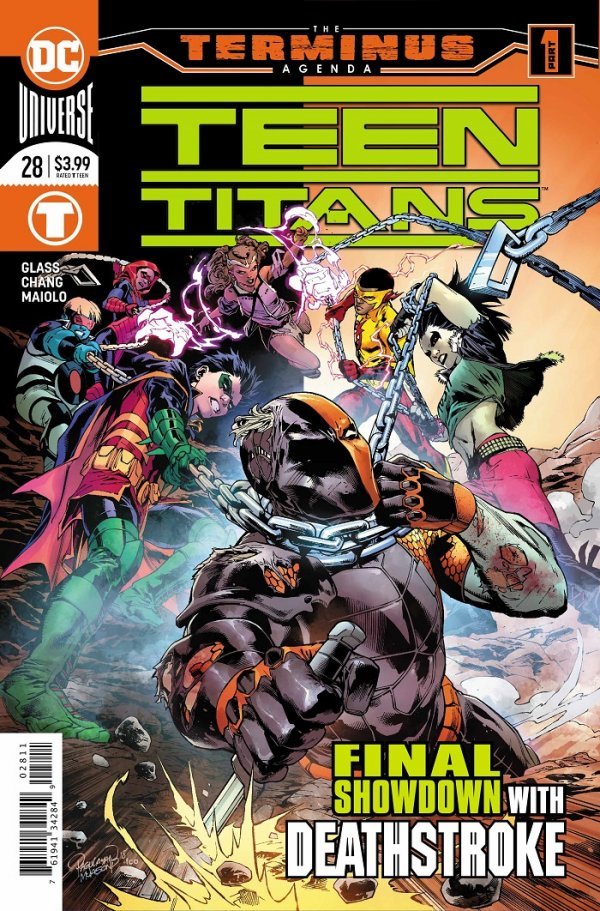 Overview: The Teen Titans make a move to take down Deathstroke.

Synopsis (spoilers ahead): Robin wakes up in the middle of the night due to nightmares about Deathstroke.  Djinn comes in to calm him down.  In the morning, Robin calls a team meeting where he explains why Deathstroke is their next target.  While he accurately states that Deathstroke is dangerous, he also lies and says he’s an agent of The Other.  Kid Flash and Robin have a private conversation about Wallace’s prior relationship with Deathstroke and Wally assures him there’s no conflict.

In the prison beneath Mercy Hall, Red Arrow asks Robin why she didn’t hear about Deathstroke before the team and why he lied to everyone about Deathstroke being an agent of The Other.  She also tells him that she will pull the plug if she feels he is too distracted.

Slade Wilson walks into a barber shop in Georgia.  All seems to be normal until one of the patrons says something that tips Deathstroke off that it is a trap.  Deathstroke attacks the patrons causing Djinn’s illusion to fail and reveal the Teen Titans.  Robin calls in Crush as reinforcements as Deathstroke finishes suiting up.  Slade activates Wintergreen and proceeds to take out Roundhouse.  Roundhouse’s suit malfunctions and explodes giving Robin an opening to stab Deathstroke with a paralytic laced knife.  Kid Flash offers to take Roundhouse back to HQ so he can get in his backup suit.

Robin has Deathstroke locked up in his prison but Deathstroke suggests he’s only here by his own choice.  When Robin asks why that is, Deathstroke says that he will “fix him”.  The door behind Robin opens and a shocked Kid Flash asks Robin, “What is this place?”

Analysis: Part one of the Terminus Agenda hints at what promises to be an excellent story.  Deathstroke’s history of conflict with the Teen Titans spans countless years across several different mediums and this arc really looks like it’s shaping up to be another stellar installment.  The story builds on the personal conflict Deathstroke has with Robin in recent years as well as adding sufficient motivation for why the rest of the team would want to take him down.  Robin may have lied about Slade’s connection to The Other, but what really convinced the team to go after him is his indiscriminate killing that leaves children like them as orphans.  Wallace’s recent history with Deathstroke is also referenced so this story is very much connected to the larger DC Universe.

The big cliffhanger in this issue is Kid Flash finding out about Robin’s secret prison.  With the secret bound to come out in the next issue, it will be interesting to see how the team reacts to it.  Kid Flash’s history with Deathstroke as well as his doubts about what Robin is doing could push him to do something that really creates a rift within the team.  Overall, I would say this issue does a good job setting the stage for the story while continuing to challenge the team in interesting ways.

Chang and Maiolo’s art continues to be good and I really like that DC is keeping this team together on this book.  Since this is a crossover event, I’m curious to see the different art styles will mesh together across the different series.  One last thing that is more of an observation than a criticism, I would like to see the team in civilian clothing more in their HQ.  I don’t mind that they are always ready for action, but I’m not sure they always need to be in costume at Mercy Hall.

Final Thoughts: The stage is set for yet another showdown between the Teen Titans and Deathstroke.