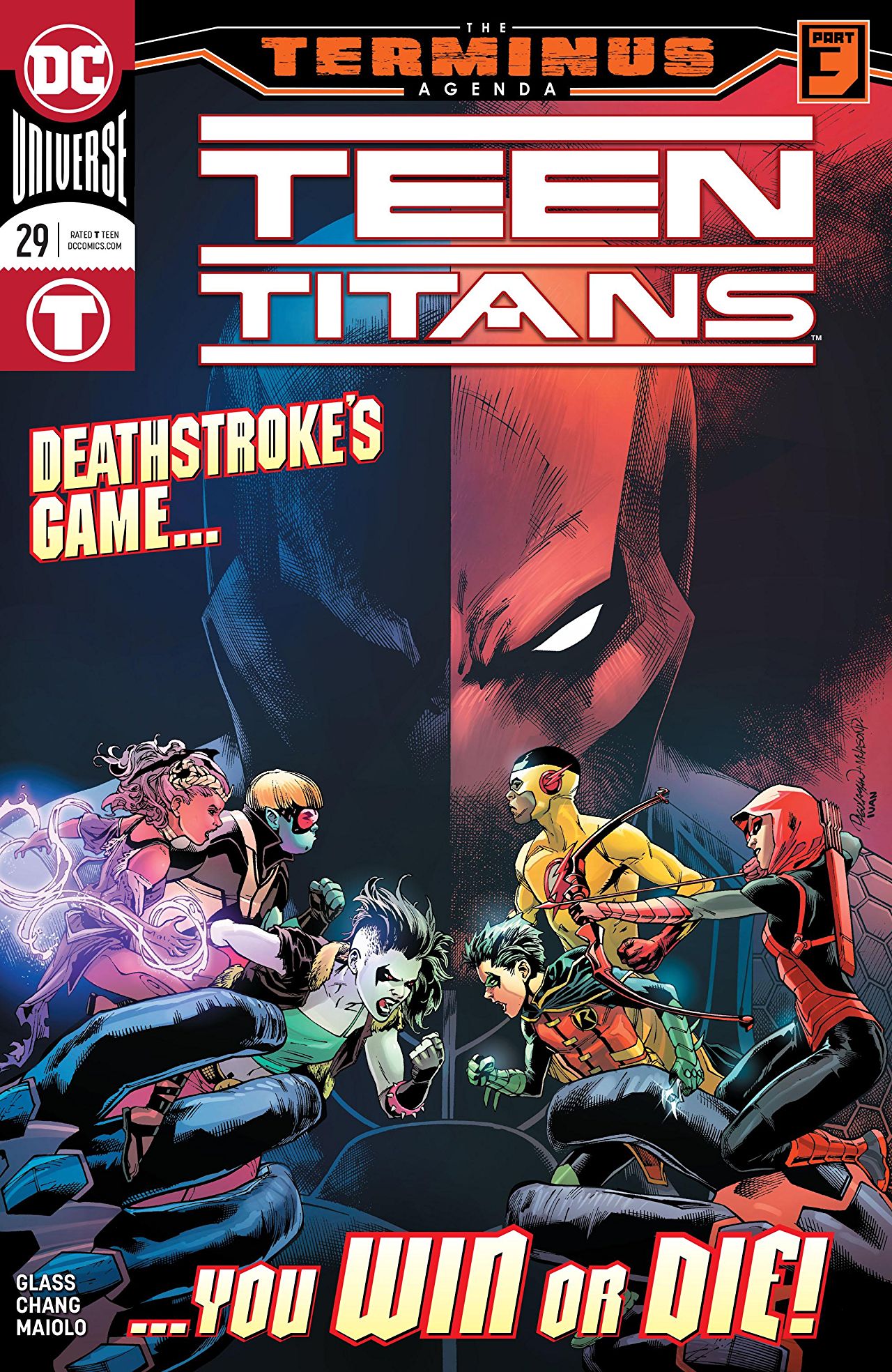 Overview: The team tries to cope with secrets and what to do with Deathstroke.

Synopsis (spoilers ahead): A day earlier, Kid Flash is upset at Robin for concealing the existence of the prison. Red Arrow and Robin tell Kid Flash that he must not tell the rest of the team about it.

In the present, Kid Flash hangs out with Roundhouse who has noticed that something is up with the rest of the team.  Kid Flash doesn’t reveal anything and they instead talk about Roundhouse’s suit.

Robin does sparring training with Red Arrow.  His mind is preoccupied with thoughts of Deathstroke and he gets a little too aggressive in his training session.

On the roof of Mercy Hall, Roundhouse has a talk with Crush.  Crush reveals that she has feelings for Djinn and Roundhouse tells her to tell Djinn about her feelings.  Crush goes to Djinn’s room to tell Djinn how she feels.  She kisses Djinn and Djinn kisses her back after a moment’s shock.

As Crush leaves, Robin comes by Djinn’s room for a magic healing session and to ask her if killing another person is justified.  Djinn doesn’t really answer but says there are fates far worse than death.

Beneath the prison, Red Arrow goes to visit Deathstroke.  He tries to goad her into doing something stupid but she doesn’t take the bait.  However, his parting words may have got in her head as she leaves.

Kid Flash asks Red Arrow how she keeps secrets.  He says that he doesn’t think he can ever be the way she is and that maybe he shouldn’t be here anymore.  Red Arrow stops him and says the team needs his moral compass.

Down in the prison, someone unlocks the shackles on all the prisoners.  Robin wakes in the middle of the night and suits up to go deal with Deathstroke once and for all.  As he gets to the elevator shaft, all the villains he locked up come bursting out at him.

Analysis: Another solid issue that focuses on the tensions inside Robin’s head as he grapples with who he is.  Deathstroke is the perfect antagonist at this point (especially after the Deathstroke vs. Batman storyline) because you can really feel Robin being tempted by Deathstroke’s darker path.  Slade offers Robin the easy way out and a path that is more in line with how he was brought up by his grandfather and mother.  Chang drawing panels where Robin’s face morphs into Deathstroke and panels where Robin sees Red Arrow as Slade when they are sparring are a nice touch.  Red Arrow is a great mirror for Robin as she was also raised by an assassin.  However, Red Arrow is able to resist the temptation to give into her overly-aggressive tendencies even if Slade might still be playing mind games with her.

There’s plenty of romance in this issue which is to be expected with a group of teenagers living together in stressful situations.  There is tension between Red Arrow and Kid Flash, and Crush decides to show Djinn how she feels after having a brief heart to heart conversation with Roundhouse.  I really appreciate that Glass and Chang didn’t dance vaguely around Crush’s sexual orientation.  It’s been hinted at for a few issues but she gets a moment in this issue to say it openly to Roundhouse.  It will be interesting to see how this plays out in future issues especially given how Robin feels about Djinn.

While Red Arrow calls Kid Flash the “moral compass” for the team, I think it’s safe to say that Roundhouse may be their emotional anchor and pseudo-counselor.  He’s gained Crush’s trust and is close friends with Wallace.  I’m interested to see if he can develop closer relationships with Robin and Red Arrow as we haven’t seen him interact with those two as much.  In any case, I love the team’s dynamics right now.

Chang and Maiolo’s art continues to be good.  There is a tangible tension to the fight scenes and subtle emotion to the quieter scenes that will really immerse you in the story.  If I have one critique of this issue, it’s that it doesn’t really connect as much as it could to the previous issue in the story arc (Deathstroke #42).  I read Deathstroke #42 to prepare to review this book and I feel like I could have skipped it and this story would still be the same.  But overall, this is a really solid issue which doesn’t surprise me at all given how good this creative team has been on this title.

The big cliffhanger here is the identity of the person who released all the criminals.  It could be Wallace, but I’d bet that Red Arrow was the one to do it after realizing that Robin is not thinking straight after their sparring session.

Final Thoughts: Another solid entry in the conflict between the Teen Titans and Deathstroke.