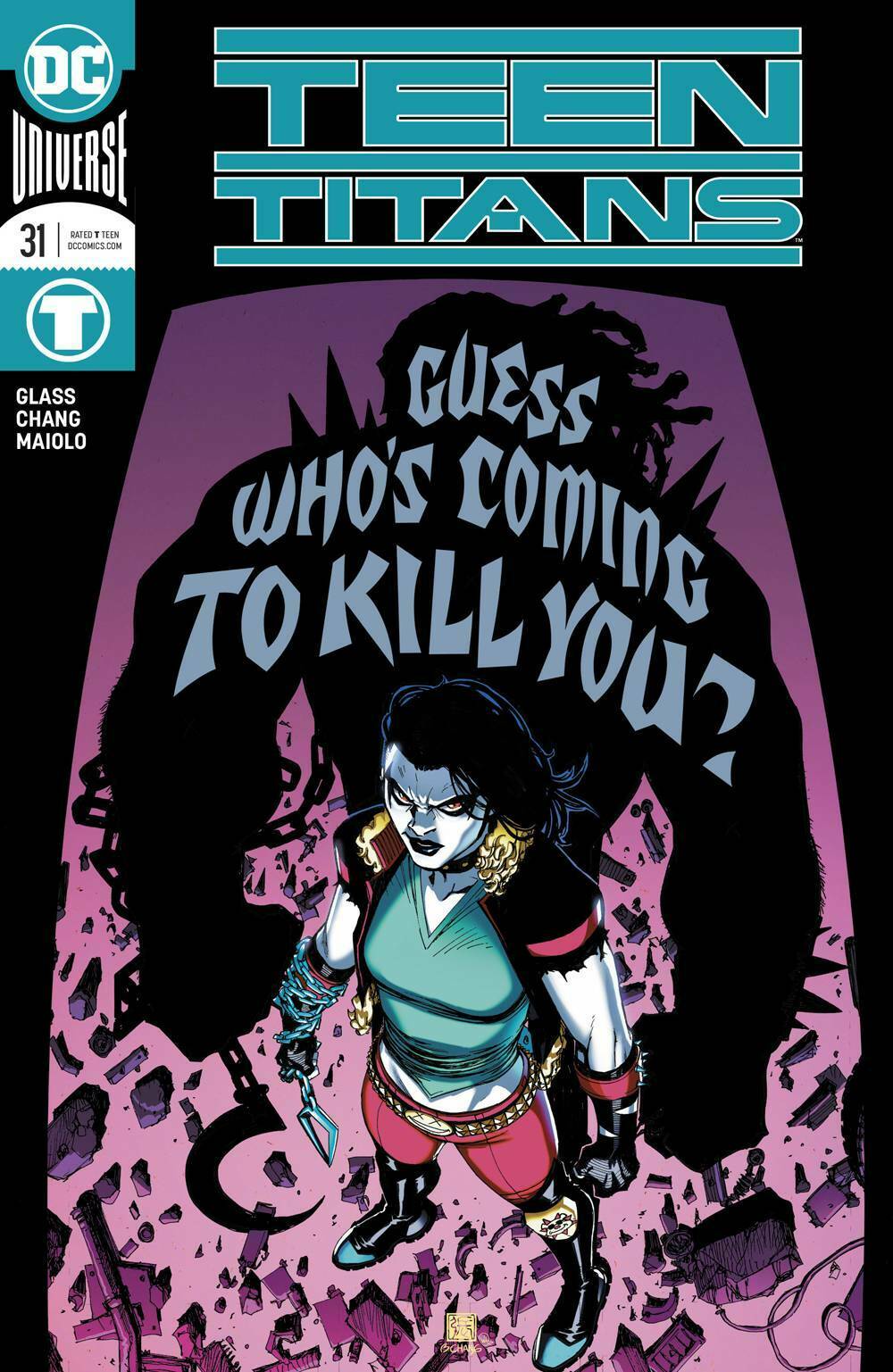 Overview: The Main Man Bounty Hunter Lobo is after his one and only (that he knows about) daughter Crush! The Titans try to defend her, but the Last Czarnian is far too powerful, and it’s only a matter of time before they all get killed for their trouble.

Synopsis (spoilers ahead): After a routine bounty pick-up on behalf of Kanjar Ro, Lobo picks up a mysterious job offer from someone calling themselves “The Other”. The offer is to go after Crush from the Teen Titans.

Cutting back to Mercy Hall, Lobo catches the Titans off-guard and roundly overpowers them before Djinn transports him to Crush’s bedroom. This separation gives Crush the chance to take him on one-on-one, but she’s no match for his might.

As the battle moves to the trainyards, the Titans decide to put aside their differences in order to keep Crush alive. Djinn suggests opening the Obelus, but Crush, unsure what might happen with Lobo being so close to it, objects and vows to fight him alone. Lobo continues to whale on her, and just as he’s about to stomp her skull in, Crush is saved by Wally. As she passes out, Lobo tastes her blood of the ground and knows he’ll be able to find her no matter where the Titans take her.

Analysis: Lobo is one of DC Comics’ most enduring characters. From his satirical creation by Keith Giffen and Rod Slifer to his appearances in the 1996 Superman animated series, his appearances are generally welcome to this reviewer because he’s generally entertaining. It’s his commitment to his singular dimension. Admittedly I’ve not read many or even several of his appearances, but he rarely strays beyond form. From Superman: The Animated Series to DC vs. Marvel, he’s regularly depicted as a selfish, sleazy, violent monster, but one with enough panache and charisma that you can’t help but be entertained by him.

It’s that charisma that carries the issue, as his fight with Crush and the Titans is all there is to it. Rather than reading this as a one-note, run-on chase sequence, the action and sense of desperation make for a fun read. It’s also a strong way to get the Titans back together on the same page, after the revelations and betrayals from the previous storyline. It’s addressed in a couple of panels how Wally still objects to Damian and Emiko’s actions, but this isn’t the time to continue the debate. It kept the events of the last issue relevant and still important without drowning out the stronger priority of keeping Crush alive.

Honestly, Lobo is a solid antagonist for the Titans. They’ve got heavy hitters like Wally and Djinn and even Damian to some extent, but Lobo is Superman-class powerful. Demonstrating his ferocity in the first scene with him killing his bounty, in addition to him referencing that he wasted the rest of his race including his own children sets up for those unfamiliar with him the danger the Titans are in. Robin, Kid Flash and Roundhouse probably should be dead after the initial fight, but Glass makes it clear that Lobo’s pulling his punches when it comes to kids, but not out of sentiment. That might be a risk in the second part if the one-note evil of Lobo is hammered too long. One of the diminishing returns in Dan Jurgens’ Action Comics run in Rebirth was that Superman and Lex Luthor battled Doomsday for six issues straight. Granted, a serious threat can’t be resolved quickly, but the constant refrain and reiteration of the villain only has so much real estate on the page to make an impact and to keep that impact interesting.

Still, I have faith in Glass and Chang. Change especially directed some great action sequences that looked like they hurt with every blow.

Final Thoughts: Looking forward to seeing how the Titans get out of this jam, or even what might happen if they don’t.