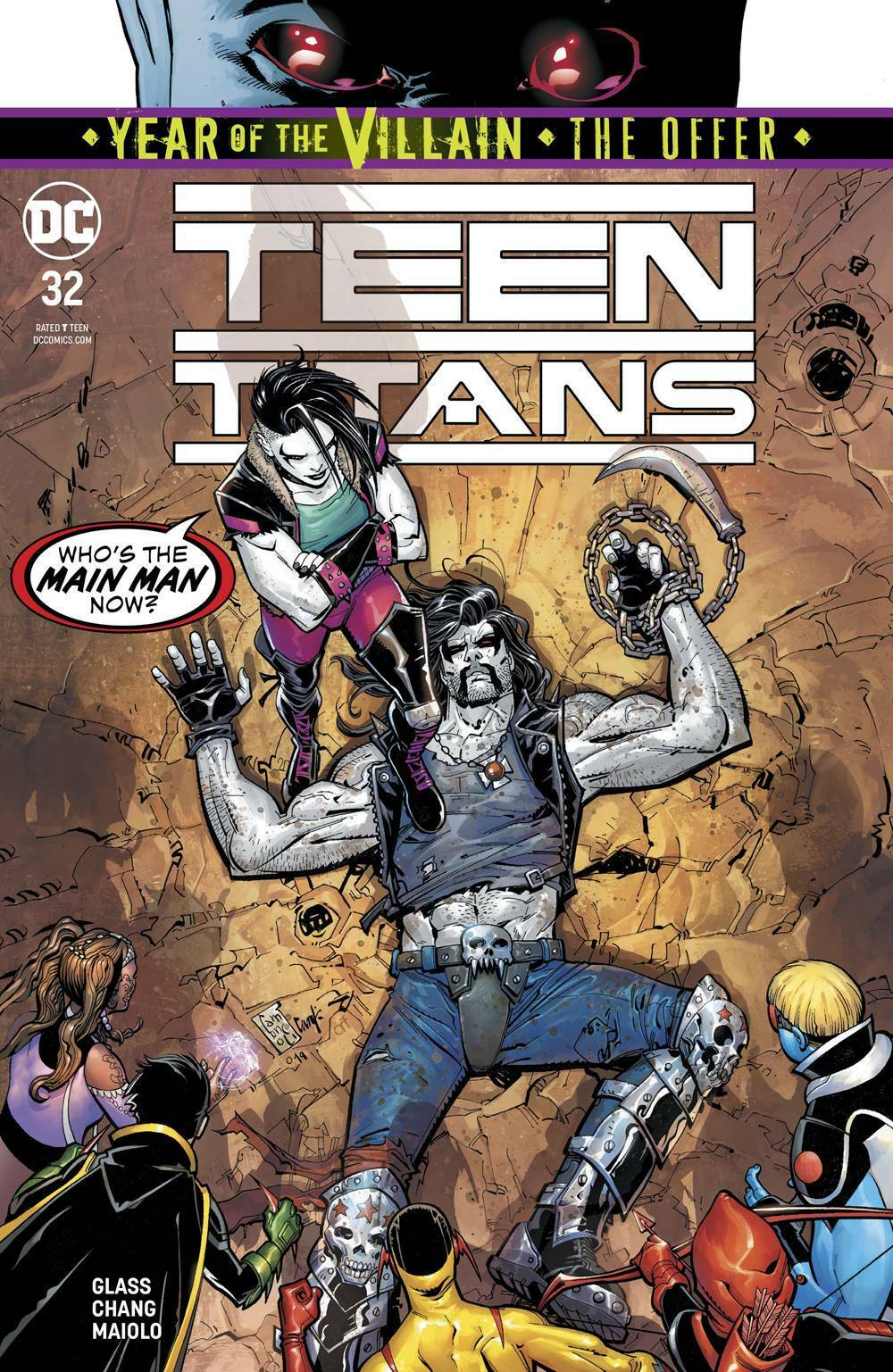 Overview: After recovering from the beating she took from Lobo in the last issue, Crush and the Titans know that the best offense is a good defense! Prepped and ready, the super-powered teens make their final stand against the Czarnian bounty hunter, even if they have to kill themselves to do it!

Synopsis (spoilers ahead): Crush awakens from her injuries and finds herself with the Titans at Shado’s old farmhouse. She’s insistent that she tackles her father alone, but eventually relents after talking with Red Arrow.

Roundhouse expresses worry about the safety and well-being of his teammates. Robin and Djinn discuss how they plan on dealing with Lobo, but are both unwilling to kill him. Hours later, Lobo finds the Titans at the farmhouse, and – despite their best efforts including a pre-planned tranquilizer roof – they are unable to defeat him hand to hand. Roundhouse convinces Crush to release the Obelus chain, which works and seizes Lobo in his place. Crush deduces that the chain was from her mother, who Lobo claims he has no memory of. As he promises to finish the contract, Djinn phases through his brain, knocking him out. A short time later, “The Other” finds Lobo buried on the dark side of the moon. He reveals himself to be Lex Luthor and offers to have Lobo destroy the Teen Titans with the help of his daughter.

Analysis: After an entertaining and action-packed first part of this two-issue story, I really wasn’t feeling this conclusion. It had more downtime, with character interactions and planning understandably taking the place of the relentless fighting from #31, as the Titans now have to fight back. It wasn’t the set-up or the structure that didn’t impress me, it was the placeholder dialogue and shallowness of the writing.

Starting with Crush, we’ve seen characters like her before: angsty teens with chips on their shoulders resenting being likened to being chips off the old block. Kids with daddy issues are the most utilized cliché in superhero comics, and it doesn’t really make any single character special. With Crush, her conflict came from Lobo’s utter amorality and disinterest in seeing her as anything other than a paycheck. There should’ve been some emotion from that, but she ultimately acts as though she’s just been bested by some random bad guy that got the better from her. Not that she should shed a tear over Lobo or anything, but there’s hardly any introspection that they are related, other than pure anger. But there’s little to go on from that as a singular emotion. On top of that, the chip on her shoulder makes her working with the Titans initially reluctant but very quickly turns around. Too quickly to care about, in fact. She swears to go at it alone until she doesn’t, and she swears to never use Obelus until she doesn’t. This is on Adam Glass, as the needs of the plot don’t require this paper-thin hesitation. Those scenes only serve to go through the motions of a typical hard-edged teen hero character, and going through the motions keeps a character two-dimensional.

The writing as a whole let everyone on the team down. For starters, everyone is addressing each other by their hero codenames in ways which read as unnatural and antiquated. Recap pages are appreciated in providing exposition without sacrificing the deftness of the script. As it is, it reads like an immature story for an immature audience too unfamiliar with the characters to ask any less their who they are and what happened before. The last issue didn’t have this problem.

Finally, Bernard Chang’s artwork was solid, but I wasn’t grooving on the way he illustrated Wally’s lips throughout. His mouth was always puckered, as were Roundhouse and Robin’s a few times as well. If it’s supposed to convey the middle of a speech, it wasn’t necessary.

Final Thoughts: Overall the issue was a suitable conclusion to the two-parter that was well-paced enough, but a few writing clichés and a lack of suitable interest in Lobo and Crush’s relationship brought this down after the high-flying fun of part one.