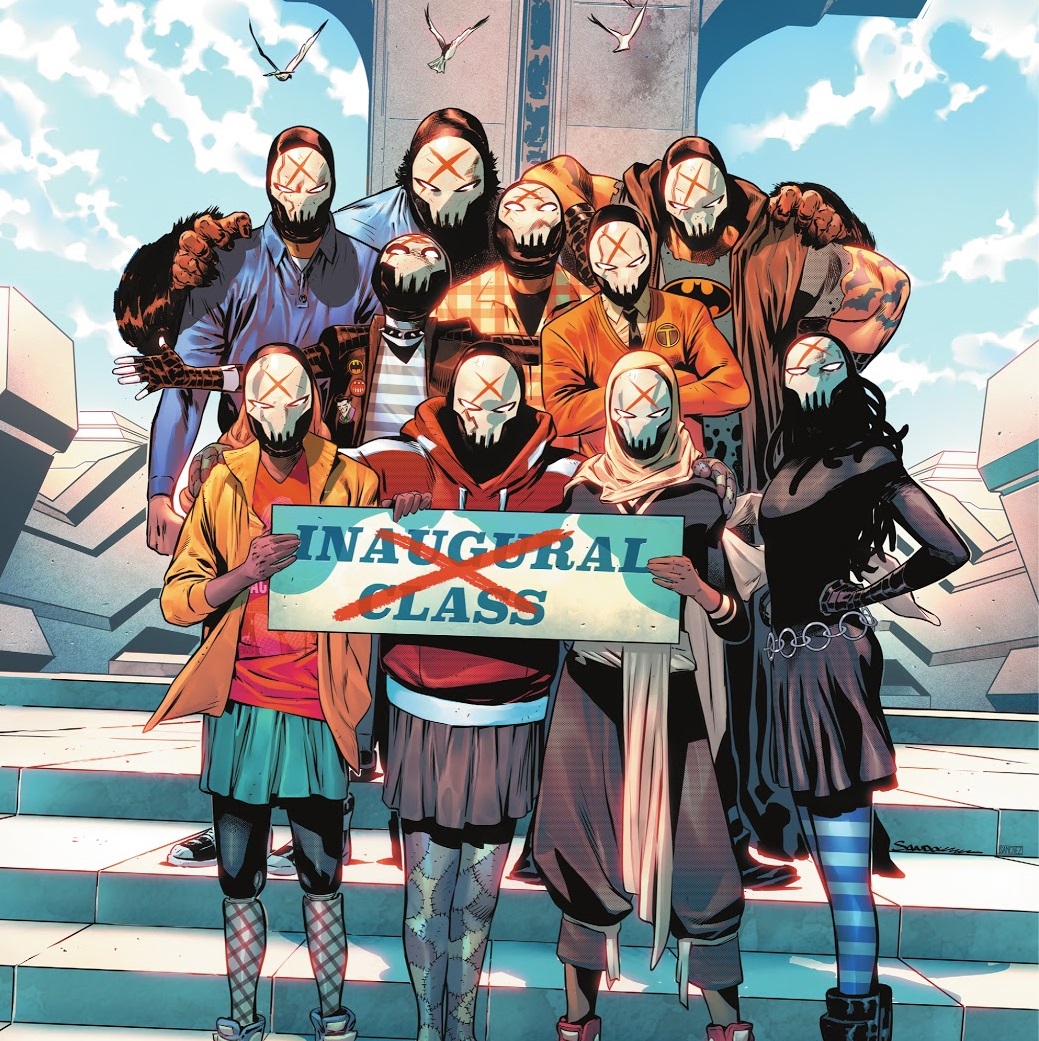 Synopsis (spoilers ahead): In Teen Titans Academy #2, Alinta, a teen aspiring to be a hero under the tutelage of the Titans, desperately races down a hallway, trying to manage her speed so as not to go too fast and rip the wheels of her wheelchair right off. She doesn’t have her blade runners — blade prosthetics that attach at her thighs — which prevent her from tapping into the speed force and using her powers to escape her pursuer.

A projectile thrown from her attacker crashes into her wheelchair, and the girl grunts in pain as she goes crashing into the ground. Alinta gazes blearily up at her attacker and asks the man wearing the mask and costume of Red X who he really is.

The man replies that he is someone who is always three moves ahead before two shurikens are sent flying towards her, both in the shape of red X’s.

Seventy-two hours earlier at Teen Titans Academy, Cyborg works with the young teens and advises them on how to train and utilize their powers properly. Cyborg learns that Matt Price, one of the young heroes, doesn’t remember anything of his past aside from waking up on an aircraft carrier with super strength and a heightened sense of intelligence. Matt appreciates Cyborg’s offer to listen if he ever wants to talk about it, but because he can’t remember anything to talk about, he doesn’t think that’s necessary.

In one of the bedrooms, Kory tells Dick that she’s sure that the Red X mask will turn up, but she also knows that’s not all that’s bothering him. Dick tells her that Barbara called and that he needs to spend more time in Bludhaven. Kory turns away, saying that she doesn’t doubt his ability to handle both his responsibilities to his city and the Teen Titans.

Later, fully dressed in black and blue, Nightwing approaches Cyborg, correcting the other hero when he addresses him by Dick and not Nightwing around the kids in the hallway. Dick confides in Cyborg that he’s concerned that he’s messing things up with Kory, but their conversation is interrupted by Matt. The young hero asks Cyborg for permission to be late to class in order to pick up some research he’d forgotten in the library, which Cyborg grants. A moment after, Alinta asks if she can go get her blades from her room for the running portion of their class, to which Cyborg responds with “speedster quick, okay?”

Turning back to Dick, Cyborg asks what happened between him and Kory and if it involved Barbara. Dick answers that it’s always Barbara and questions if Cyborg’s seen his old X mask anywhere. Turning to go teach his class (a class that has started an impromptu sparring session with Beast Boy), Cyborg responds in the negative and suggests that Dick check the command center to see if it’s there.

Dick leaves Cyborg to handle his class and follows the Titan’s advice. Dick stares in shock for a moment after entering the command center. At a computer is a man wearing a Red X mask and an automated voice announces that a download is eighty percent complete.

Before Nightwing can stop him, the Red X impersonator grabs a USB drive and dashes out of the room, Nightwing hot on his heels as he calls for backup. Both Toria and Alinta, now wearing her blades, join Nightwing, only for them to realize that the man has escaped. Nightwing curses in frustration and then orders Donna to call an assembly, now.

Several moments later, the young heroes gather for the assembly, questions flying as to what they’re gathering for. Alinta, who is making her way somewhere in the tower, presses a phone to her ear and orders the person on the other end to stop calling her. The voice responds that they own her; they didn’t pluck her from the outback and set her up with a whole new life just because they’re nice. Alinta angrily hisses that nobody owns her and terminates the call.

Elsewhere, in a darkened room, a man by the name of Smith asks if that was a kid on the other line. The other occupant in the room answers by questioning if Smith is going soft, to which Smith responds by ordering them to give him the file.

Back at Teen Titans Academy, the original Teen Titans have gathered, debating quietly amongst themselves on how to handle the situation with the Red X impersonator. They end their debriefing and follow Matt and Alinta, both arriving late to the assembly, into the room with the rest of the gathered heroes. As the older heroes talk, Matt asks Alinta where she was. The other teen doesn’t look up from her phone as she tells him she was playing hero and deletes a contact with the initials of A.W. from her phone.

Flashing forward to the opening scene of the issue, Alinta asks the man dressed as Red X if he’s going to kill her or not. The man tells her to shut up; he’s not going to kill her, but they might.

Alinta whirls around and gasps at the three other people who have appeared behind her. A masked man in red and black, a Talon, and Superboy stand over Alinta and advise her to come with them quietly.

After all, anything else would be…suicide. [Editor’s Note: Those looking for answers should seek out Suicide Squad #2 for more answers]

Analysis: Red X is back and wreaking havoc in the Teen Titans Tower in Teen Titans Academy #2 written by Tim Sheridan with art by Rafa Sandoval. While I wasn’t taken with it as a whole, there were several elements about the story that I found enjoyable. The interaction between Dick and Cyborg was well-written and conveyed a sense of friendship between them, and seeing the original cast of Titans now take on the role of teacher and mentor was neat, showcasing the passage of time and years of experience they have since they first started out as young proteges. The mystery of who the unknown men are, what the folder contains, and the villainous characters who are being introduced definitely lend themselves nicely to sustaining interest in the plot of the issue.

Despite seeing some of my favorite heroes working together once again as a team, Teen Titans Academy #2, unfortunately, didn’t land for me.

The story kicks off with a bang as a man, his identity still unknown, attacks one of the young heroes, pitting her in an awful situation; she’s handicapped and alone, facing down not only ‘Red X’, but additional members of Task Force X. The scene should convey a feeling of stress and tension, but because there has been very little (to none) build-up with Alinta’s character and there is no emotional interest on my end as a reader, I found myself reading through the scene quickly to get back to other characters. That wasn’t the only instance I found myself skimming through the story; the issue spends time with other young heroes, but aside from the moment between Matt and Cyborg, I wasn’t all that interested in those scenes. The young characters are intriguing as an idea but just didn’t really land. Overall, I thought they were compelling as a means to move the plot forward but not captivating as actual characters.

The involvement of Red X and the mystery surrounding who the man is is well utilized throughout the issue, but it seems a bit mediocre that he’s able to outsmart and outmaneuver Nightwing and the other Titans so easily. How was he able to sneak into a room and download information without Cyborg (at least) being made aware to some degree? The Titans suspect that the secret identity of Red X might be one of their students; wouldn’t they have extra security or contingency plans in place for something like that? The forethought of the older heroes comes across as a bit underplayed compared to what they’ve accomplished in the past. In the first issue, the Titans seemed extremely unconcerned by the mysterious gift of the original Red X mask, and Nightwing actually managed to lose it. Initially, it seemed as though there was more to that than it seemed, however, that doesn’t appear to be the case which is rather underwhelming.

Unfortunately this issue just didn’t hit home for me as I found the young heroes to be disinteresting as characters and the capabilities of Nightwing and the other Titans bit underwhelming. The mystery of Red X still holds a sense of intrigue, but it’s a bit off-set by my overall despondent opinion of this issue.