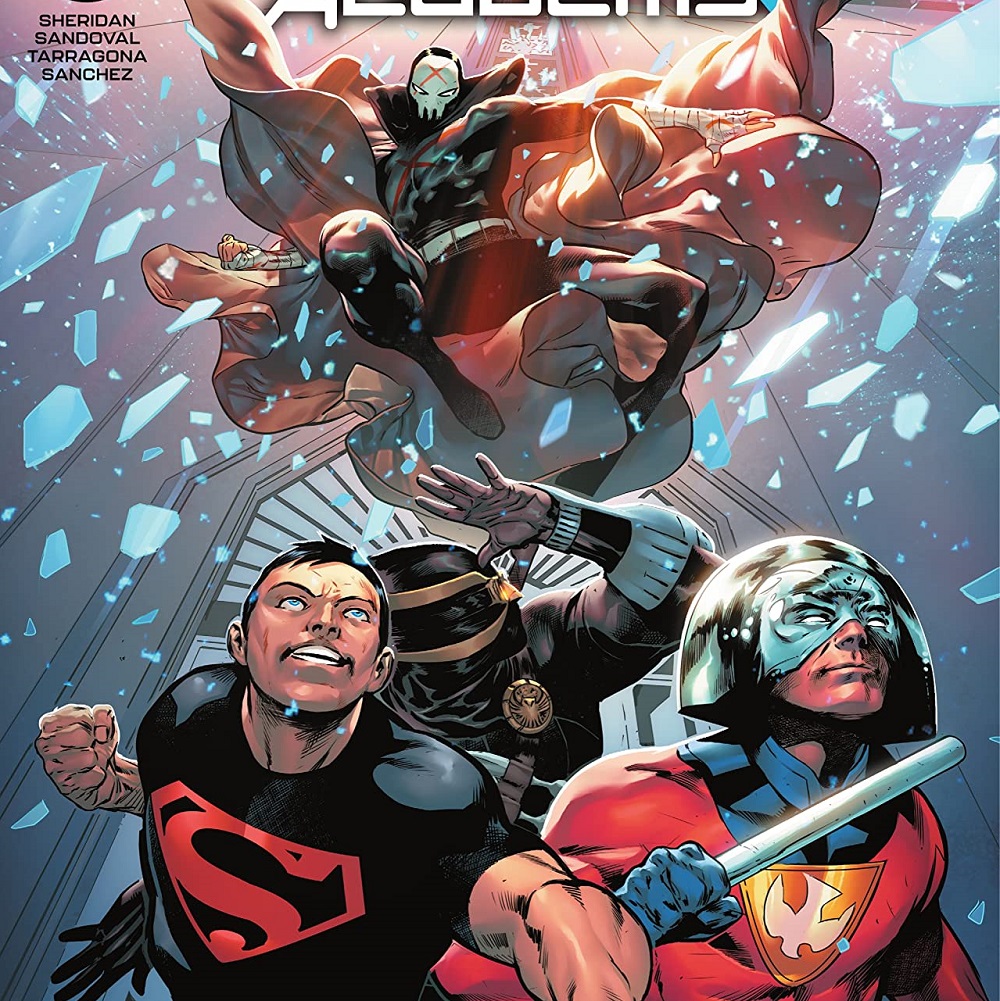 Overview: In Teen Titans Academy #3, secrets are made known within the school along with the presence of the Suicide Squad, whose dictated objective revolves around one particular teen hero.

Synopsis (spoilers ahead): Gathered together, the Titans discuss which one of their students might possibly be Red X as they travel to Markovia to rescue meta-teen refugees and bring them back to the Tower. Despite the pressing need to uncover the identity of the vigilante masquerading as Red X, Donna Troy bluntly states that they shouldn’t prioritize the issue over their duty to help the rest of their students.

Noticing her unease, Beast Boy asks Raven if something’s wrong, to which she replies that she saw something…and that they need to check on the kids at the tower, now. Despite her concerns, the Titans decide to focus on their mission and entrust the safety of the Tower and the kids in it to the upperclassmen.

Back at Titans Tower, the Suicide Squad prepares to break into it, but they’re not all in agreement with this particular assignment. Amanda Waller, the creator and leader of the Suicide Squad, easily dismisses Peacemaker’s concerns via their communicators, stating that she trusts the kid dressed as Red X; he says he can get them into the Tower, and that’s good enough for her.

In their dorm room within the Tower, Alinta shares with her roommate, Summer, her connection to Amanda Waller. Her nation in Australia is full of good people, but her family on the other hand…isn’t. Once she discovered her powers as a young girl, gaining bursts of speed via the speed force, her parents had been delighted, saying it would open new roads for her family’s business. Alinta had been so happy to help, but at the time she didn’t know her parents trafficked in stolen goods and used her as their runner to deliver messages and packages instantly across the outback of South Australia. That is, until the day she lost her legs due to the many debts her parents were unable to repay. She’d been left for dead, until Amanda Waller rescued her, offering her a new life on the condition that the instant she called, Alinta would come running.

Summer promises to keep Alinta’s secret but encourages her to share it with Titans. Remembering that she’d forgotten her blades in her locker, Alinta exits the dorm and doesn’t respond to Summer’s encouragements.

As Alinta makes her way down the halls of Titan’s Tower, the Suicide Squad does similarly, slipping in unnoticed thanks to Red X and begin making their way through the building with the intention of retrieving their target; Alinta herself.

Suddenly, the alarm starts blaring throughout the tower, tripped by Superboy who had unknowingly set it off; he’d been distracted staring at a picture in a display case. Grinning in the photo and standing shoulder to shoulder is himself with Impulse, Wonder Girl, and Robin.

Suddenly, fully awake due to the wailing of the Tower’s alarm, every hero gathers in the Tower, heading down to the classrooms where the intruders are. They’re quick to arrive and help rescue their downed teammate, Alinta, who’s surrounded by the Suicide Squad.

The mission is a bust, and Amanda Waller is quick to recognize that and sends an extraction team to teleport the Suicide Squad out of the tower.

As one team makes their hasty retreat another portal opens up as the Titans enter just in time to help wrap things up. As things settle down, Beast Boy hands Raven a cup of hot chocolate and comments that Raven’s premonition was right, although the kids handled themselves pretty well. Raven doesn’t relax; she had a feeling about the attack, but that wasn’t the premonition she had told him about. The scary stuff…somehow, she thinks, is already here.

Elsewhere, in the trashed hallway where the fight between the Suicide Squad and the students of Titan’s Academy had just taken place, three students slowly make their way through, combing the area for clues. They’re the students from Gotham City, fanatics of Batman, and they’re on a mission to put the clues together and finally figure out — hero or villain, friend or foe — the true identity of Red X.

Analysis: Teen Titans Academy #3, written by Tim Sheridan with art by Rafa Sandoval and Alejandro Sanchez, opens up with questions still unanswered as the Suicide Squad makes a hasty retreat and the identity of the mysterious Red X is still at large…along with his true motivations.

In this issue, the Titans work to uncover the identity of the man costumed as Red X while balancing their responsibilities as teachers, mentors, and heroes. The safety and instruction of their students are temporarily placed in the hands of the upperclassmen, the Teen Titans, as they travel to rescue yet more teens with powers and bring them back to the Tower for their safety and wellbeing.

One of their students, however, ends up needing to be rescued while in the Tower. The Tower is impenetrable to those from the outside, or so Cyborg has said, but it doesn’t take much effort on the part of Red X to get his squad of villains into the building and in front of their target; academy participant Alinta, aka, Bolt. Why, and for what reasons, Alinta is being targeted are still unclear, similar to the motivations of Red X, whose true intentions don’t seem as straightforward as they once were.

As seen throughout Teen Titans Academy #3, the teen’s hidden past is catching up with her and as Alinta realizes her situation is the best it’s ever been, she decides to stand up to Amanda Waller and refuses to take orders from her anymore. Amanda Waller isn’t the woman in charge of the Suicide Squad because she takes no for an answer, however, and doesn’t waste any time sending her team to infiltrate the Titans Academy and bring her back the speedster.

The resulting meeting between the two teams is explosive but ends ultimately with a win for the students of the academy.

Teen Titans Academy #3 focuses heavily on the young heroes and fully brings into play the Suicide Squad. It doesn’t answer too many questions aside from the identity of Alinta’s contact and her backstory and keeps the elusiveness surrounding Red X as thick as before. Because it spends the majority of its time around the young heroes, characters who are all relatively new, the weight of the plot overall doesn’t feel all that heavy, since my attachment to the characters isn’t very strong.

Additionally, similar to my thoughts regarding the previous issue of this run, the capabilities and thoughtfulness of the senior heroes seem a bit bland. Despite their resources and knowledge, the Titans have yet to figure out who Red X really is, but the job might just be complete for them by three new students (which doesn’t seem very impressive on the part of the Titans).

Despite my grievances, it will be interesting to look ahead and read how things might play out, especially as the face behind the Red X and the reason why Amanda Waller wants Bolt are revealed, and why Superboy seems to be aiding the Suicide Squad.

Teen Titans Academy continues to focus on its new characters and teases the coming of something evil, beyond just the involvement of the Suicide Squad. The final end-game and identity of Red X are still unknown, just like if, and how, the young heroes from Gotham might uncover it all.