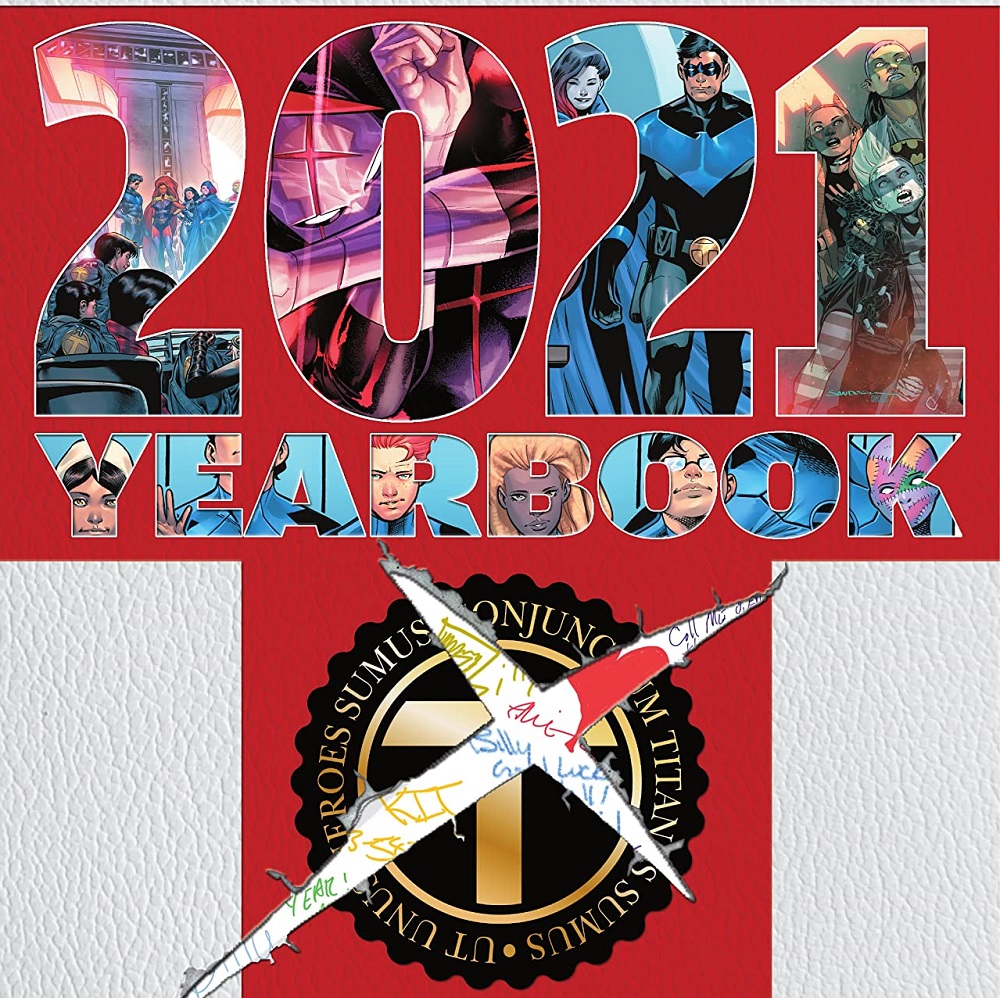 Overview: The Teen Titans Academy 2021 Yearbook #1 contains short stories centering around academy students, teachers, and, most notably, it reveals a piece of the ever-mysterious Red X’s past.

Synopsis: Teen Titans Academy 2021 Yearbook #1 starts with an idea of what Stitch’s dream would be about, kicking-butt as a swashbuckling hero, wielding powerful magic, and dishing out justice. That’s what Stitch would dream about if dreaming were possible.

But Stitch doesn’t dream or sleep or eat; as a magically animated, gender-nonconforming rag doll, dreaming while asleep isn’t a reality. But aspirations? Stitch has plenty, such as being a hero, part of a team, having a family of friends, and the best place to start is in the big “T.”

Unfortunately, Stitch mostly goes unnoticed by other teens; hanging out with friends and avoiding enemies doesn’t happen because the hero hasn’t made either of those.

A commotion in the corridor between classes pulls the young teen back into the present. Taped to one of the doors is a flyer for the class president election, a great way to make friends, Stitch overhears one student says, and a great way to make enemies.

Later, during P.E., Stitch’s fellow classmate and magic-wielder Dane encourages Stitch to sign up for the presidential election and ignores any excuses not to. It’s a great way to make more friends and hastily corrects Stitch’s statement that friends aren’t necessary; Dane considers himself Stitch’s friend, and the other hero should too.

Their conversation is interrupted by two other students getting into a fight, which quickly escalates to punches, and bodies being thrown, hard. As one student sends the other slamming into the wall, the concrete starts to break. One too many hits later and suddenly the pieces of the wall, ceiling, and basketball hoop that was attached to the aforementioned ceiling start to come crashing down, right on top of the other spectating students.

Stitch doesn’t even have to think; a split second later the debris is being safely held aloft by magic and nowhere near the terrified students. The other teens are quick to recover and shout praises to their hero, cheering and welcoming Stitch as their savior and friend.

Later, Stitch recounts the day’s event to Doctor Fate, mentor and magic-user, who congratulates Stitch on the new friends made and for getting to know, just a little bit more, what it means to be a hero. For Stitch though, a place among friends and people to belong to is the true reward of the day.

Analysis: Teen Titans Academy Year Book of 2021 #1 opens with a little interlude into the life of Stitch and touches upon two major components for any young person working through their teenage years; belonging and friends.

The main theme of Stitch’s story is one that is most likely extremely relatable to some degree for any of us, and on the whole, well-executed. The character isn’t overly dramatic or unlikeable, and the interaction between Stitch and Doctor Fate at the end was nice.

The events leading up to Stitch making friends don’t win any points for originality, and perhaps my biggest complaint with this short story is exactly that. How Stitch finds that sense of belonging–saving the lives of the other students and then bam, instant friends–does read like a strong cliché. I would have loved to see a less-used approach to arrive at the same results; I believe that could have added creativity and a layer of interest to the story that wasn’t quite there for me in this read.

Bernard Chang’s art was definitely a positive, however, and the illustrations coupled with Marcelo Maiolo’s coloring were vibrant and engaging!

Synopsis: The Titans Tower explodes with a deafening boom and chunks of cement and debris come raining down upon Cyborg and Beast Boy, who cries out to Raven. Finally, once the dust settles, Raven stares at what looks like a figure, half-Cyborg, half-Beast Boy, dead on the ground.

The sound of Beast Boy shoveling a spoonful of spaghetti into his mouth pulls Raven out of her reverie. They’re at dinner together; Raven had stopped time in order for them to have a quiet dinner date and doesn’t want to talk about her vision. Beast Boy can tell that whatever it was she saw is weighing heavily on her, and, searching for a distraction, stands and leads Raven away from their table and onto the dance floor, eliciting a smile from her.

It doesn’t matter what the future holds, or the past, Beast Boy tells Raven, moments like this one are what matters. Raven agrees and they stand there together for just five more minutes.

Analysis: In one sentence, “Five More Minutes” by Sheridan and Santucci is short and sweet and a small, soft moment between Beast Boy and Raven. This story in Teen Titans Academy 2021 Yearbook #1 does give a strong sense that Raven’s visions will become a big piece of the puzzle, and possibly a reality for the Titans, later on.

The writing by Sheridan was greatly enjoyable, and although I found myself not being as drawn to the art in this story as I have others, I found that Santucci did a neat job drawing the characters with notable expressions that emphasized the text.

Synopsis: Baseball is the name of the game at Teen Titan’s Academy the night before most of the kids head home for the weekend. Most, but not all, including Matt Price. Sitting on the sidelines watching the game, the teen is surprised to hear the voice of Tooby in his head. The other hero has already left for the weekend upstate, but Matt doesn’t waste time answering Tooby’s cry for help.

A short flight later and Matt touches down in front of a barn that is ablaze. Despite what Tooby thinks, Matt isn’t Superboy and doesn’t have freeze breath. They’ll have to make do with improvising, and by working together they manage to put out the flame and rescue the animals trapped inside.

Tooby’s parents are beyond grateful and insist that both boys have breakfast before Matt heads back to the Tower. Staring at the breakfast table full of food, Matt asks his fellow classmate if he always gathers around a perfectly appointed sitcom-level breakfast table with his parents and eats…together.

Tooby replies that it’s just breakfast; doesn’t Matt do the same with his family?

Matt doesn’t really have any family, and once they learn of this, Tooby’s parents don’t hesitate to make him a part of theirs. Tooby welcomes Matt to the farm and the family.

Analysis: Family and farming are the two major elements in this short story found in Teen Titans Academy 2021 Yearbook #1. While the art style was definitely more ‘cartoon’ than ‘DC Comics,’ it was well-written and heartwarming. It’s not too often that a teenager trying to join the Titans comes from a family with parents who are not only still alive but also loving, and so Tooby’s family was a nice breath of fresh air.

The parallels and nods to Superman and his family were neat references, and while there wasn’t anything new really revealed about either of the characters, it was still an enjoyable read.

Synopsis: Nine years ago, a man arrives on a couple’s doorstep and after a brief argument, deposits a little girl with them in return for cash. He leaves without concern for the girl, or any of the other young kids being raised in the house.

His steps down the crummy neighborhood are suddenly stopped as he’s swept off his feet and yanked into a dark alleyway. Gripping him by his shirt lapels, a man wearing the Red X costume demands to know how many kids were sold today; the excuse that kids just need a roof is pitiful, as they both know the kids are really being kept and raised to serve as Black Mask henchmen– or cannon fodder.

Moments later, the door to the couple’s home is kicked to pieces as Red X enters, easily subduing and then killing both the man and the woman. Most of the kids have fled, all except one, who stares at Red X and asks if he was Robin, who he’d seen on television with the Titans.

The man replies that he’s the one who took the mask and his fake mission from him and made it real. Standing together, the kid and the man lock gazes.

Time fades and resumes until both the man and the kid are now staring up at Titans Tower, three months before the current events of the issue, as the man asks the kid whether he wants the mask or not.

Analysis: Closing out the Teen Titans Academy 2021 Yearbook #1 is a story recounting events from almost a decade ago centering around one prominent figure: Red X. Who the mystery person actually is is still, well, a mystery, but if it wasn’t confirmed before it is now; he isn’t working alone.

The Red X from nine years ago clearly had an issue with children being gathered and groomed to become henchmen for villains and used as disposal henchmen. Perhaps whoever is now taking over the mantle shares those same sentiments, but on the other hand; teenagers being brought together to become heroes and utilized for their powers and abilities doesn’t sound incredibly different if the marketing is done right.

The motivations are still as unclear as Red X’s secret identity, although time, and future issues, will hopefully reveal them.

The Teen Titans Academy 2021 Yearbook is a creative way of sharing a bit more about the students, as well as fleshing out the comic book world and making it feel real by adding advertisements and anecdotes that relate to the universe in which the heroes live. While it didn’t knock it out of the park for me, the stories were, on the whole, short and sweet. The end of the yearbook ties it all back into the main thread of the story, and hopefully, soon the missing pieces of the puzzle will fall into place and reveal who Red X is now and his end-game.