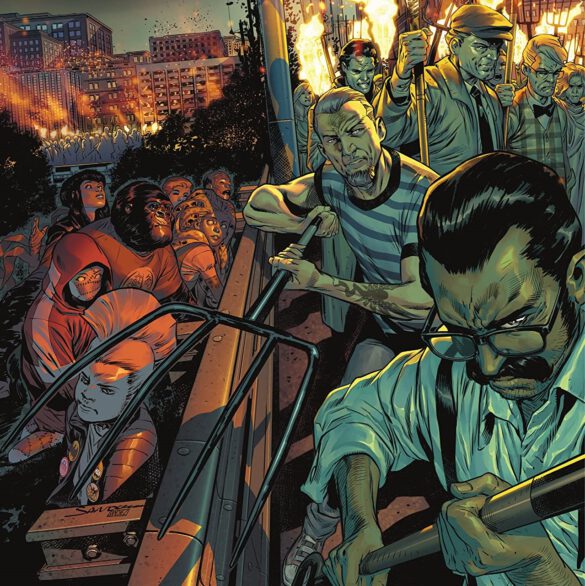 Synopsis (spoilers ahead): As Teen Titans Academy #6 begins, the students are in the middle of summer break, and the teenagers have traded their classrooms for Beach Pond, an isolated and idyllic getaway spot just outside of New York City.

The recommendation came from Summer, one of the students and Alina’s roommate, who used to come to Beach Pond every summer as a child with her parents. As the other students waste no time heading straight for the water, Summer mentions to Gregg, the nephew of Gorilla Grodd, how strange it is that they are the only ones there.

When Summer came to Beach Pond as a child, it was so crowded one couldn’t even see the pond.

Intrigued, Gregg proposes that they investigate the local town and see if they can figure out why their secluded space is so empty. They’re quickly joined by a few other classmates, and together, they head into the village of Nyach and are shocked to find it left abandoned and completely empty.

An aggressive shout startles them; the village clearly isn’t as empty as it appeared to be as a shop owner glares at them, holding a nail-studded baseball bat. The gentleman isn’t anyone that the other academy students recognize, except Summer from her childhood days. Despite her best efforts to jog Mr. Delamo’s memory, the only response they receive is his curt warning that he knew to come here and that they all need to get out.

The warning comes a little too late as suddenly the Teen Titan students find themselves surrounded by a mob of angry townspeople, with pitchforks and torches held in their hands, all very unhappy to see ‘freaks’ in their town.

A fight quickly ensues, which ends almost as suddenly as it began; in a trance-like state, the villagers stop their movements and start walking away, giving no heed to the teenagers. Not everything is as it should be, however, as Summer realizes with a start that Gregg is missing. He was somehow kidnapped during the fight, and the young heroes need to find and rescue their friend, pronto.

They decide to split up to cover more ground; Summer and Tress heading in one direction with Chupacabra and Stitch starting off in the other. As it turns out, both roads lead them straight to where they need to go; an old millhouse where all the villagers have congregated, still as if they’re being controlled by some outside force.

In the flickering light of the villager’s torches and among their cheers, the force behind the mind control is made all too clear; stepping forward onto a raised platform with a fist held high, Gorilla Grodd cries out for those before him to feast their eyes on the army of Grodd. The villain has managed to capture both the villagers and his own nephew under his mind control with the goal of conquering New York City.

Analysis: Summer break is in full swing for the students of Teen Titans Academy, but it’s not as relaxing as they’d assumed it might be. Written by Tim Sheridan and penciled by Rafa Sandoval with artist Jordi Tarragona, the adventure circling the lives of these young teens continues in Teen Titans Academy #6, but surrounded by a totally differing mystery this time; the questions who and why regarding Red X are nowhere to be seen, replaced with a much different plot and characters.

While the story, illustrated with smooth, clean lines and well-blended vibrant colors, as usual, had a fun vibe on the whole and gives us readers an opportunity to learn more about these new characters, the issue felt quite disjointed from the previous ones, so much so that I had to actually go back and double-check that I didn’t miss one.

The banter between the characters and their interactions amongst each other I did enjoy reading, but I was more than a little confused as to the point of the issue? Perhaps it’s meant to just give a small interlude from the main story, or it might tie back into the plot surrounding Red X, the Suicide Squad, and the machinations of the cloaked figures from the first few issues?

Additionally, while most of the characters were familiar and the majority of their backstories are known to us, there were still several who we’ve seen previously throughout the story but don’t know much of anything about. My hope is that this turn in the plot might offer more moments of revealing their histories and personalities and really flush them out.

Teen Titans Academy as a whole seems to ebb and flow with moments well-written and somewhat abrupt plot changes. The somewhat rocky flow of the story doesn’t engage me as some other comic storylines have, although I am crossing my fingers that that might change as the adventure develops. How this story surrounding Gorilla Grodd and his nephew might impact the deeper plot with Red X will hopefully be revealed in the issue to come.