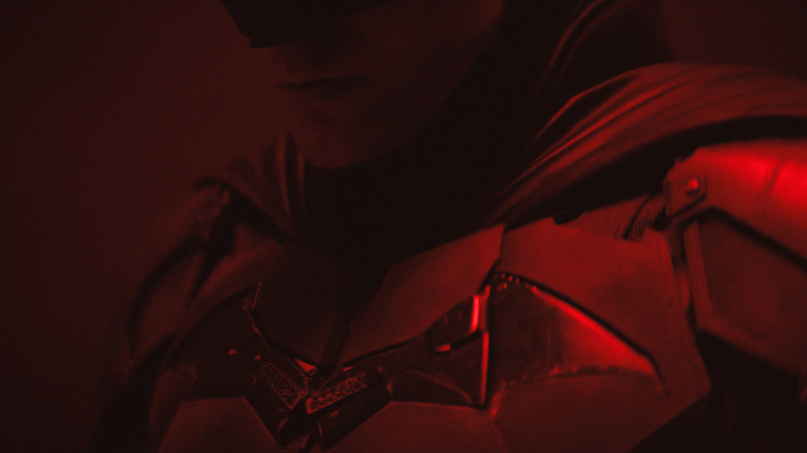 In a somewhat surprising event this evening, “The Batman” director Matt Reeves took to Twitter to give us our first look at Robert Pattinson as Batman.

Reeves posted a fifty-six-second camera test via Vimeo where Pattinson’s Batman slowly comes into a red-lit focus.   The footage only shows Pattinson from the torso up as the camera closes in on a tech-heavy bat-emblem before panning up to a close-up of Batman’s face.   Reeves went on to confirm that the driving piano music accompanying the footage was from the film’s composer, Michael Giacchino.

The Batsuit has a segmented, armored look, with what looks to be Batarangs making up the traditional, all-black, bat-emblem. The cape and cowl appear to be separated by some sort of collar.  It also appears that the film is moving away from the molded rubber of, well, every incarnation of Batman since Adam West, with a cowl that appears to be a more fitted, leathery look.

On first impressions, the suit appears to be taking some cues from the Arkham series of video games, as well as perhaps a bit of the collar from Sean Murphy’s White Knight design.  The shape of the cowl seems very traditional, and has a bit of a Neal Adams vibe to it, although the length or shape of the ears is not clear.  Incorporating of Batman’s signature weapon into the emblem of the suit is a neat idea to explain why Batman would worry about branding on his armor, much like the yellow-emblem/target idea from The Dark Knight Returns.

Giacchino’s music feels different from what’s come before while still feeling very much like a Batman theme, and if this is a taste of what the is to come from the score of the film, we are in for a treat. Adding the music to the footage was a smart move by Reeves as it added a sense of drama to the footage.

What does all of this tell us about the film?  Its too early to tell, as the full, finished suit has yet to be revealed and there are sure to be a few tweaks between what we are seeing here and when the first publicity still of Batman is released.  The return to an armored look suggests that this is a more grounded take on the character, but also looks like they’ve taken a few cues from Nolan’s Dark Knight suit with a costume that looks like Batman can move in.

With filming underway in the UK, and on-location filming announced, this could be the tip of the iceberg. Stay tuned for more reveals and coverage as it happens. ‘The Batman’ drops in theatres on June 25, 2021.