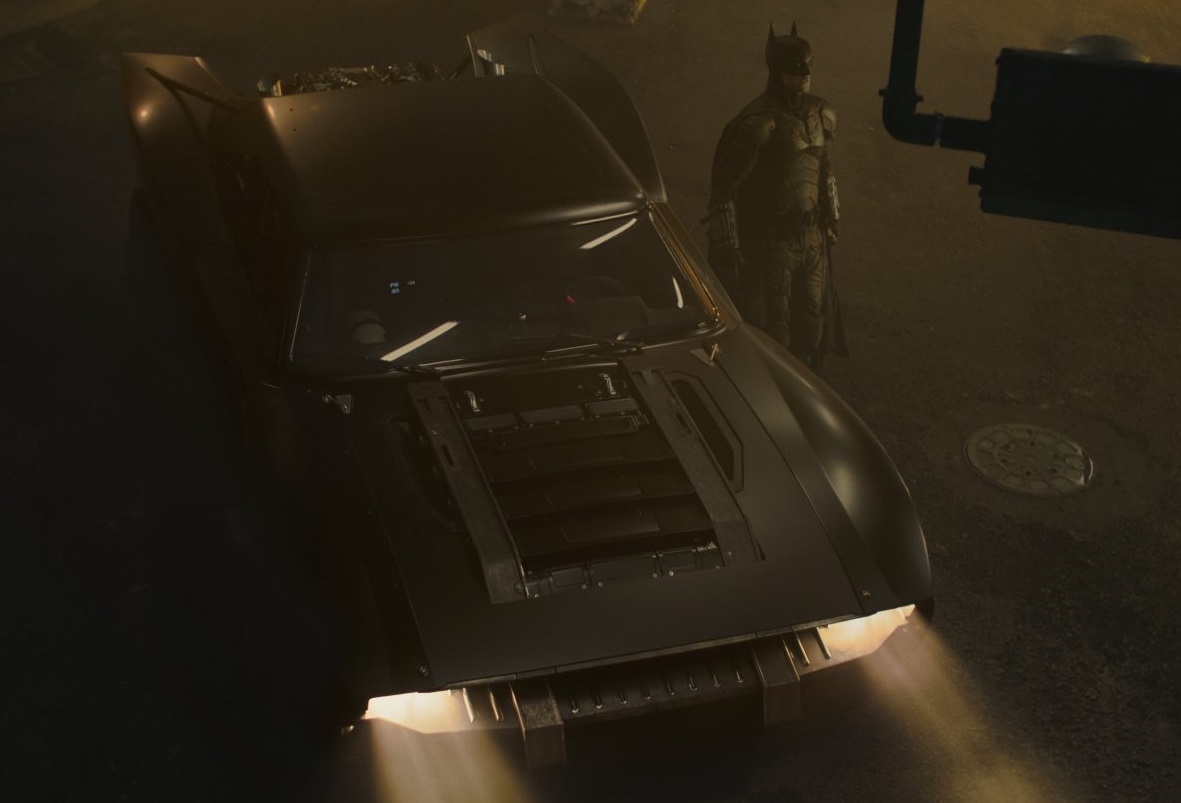 ‘The Batman’ director Matt Reeves took to Twitter again, posting what appear to be three publicity photos of Robert Pattinson’s Batman standing next to the new Batmobile for the upcoming film.  The photos highlight the car from various angles with Batman in the background on what looks to be a Gotham City street. The photos give a fairly detailed look at Batman’s new ride as well.

Taking its cues from muscle cars like the Ford Mustang and Dodge Charger, this is the most grounded car Batman has yet to drive on-screen.  The car has a stripped-down, no-nonsense look to it.  Batman’s previous rides have been stylized fantasy cars such as the Anton Furst-designed Batmobile from the 1989 film, the Tumbler from The Dark Knight Trilogy, which was meant to be a cross between a Hummer and a Lamborghini, and the Batmobile from Batman V Superman, which came off like the previous two cars got together and had an angry baby.  The filmmakers have clearly rethought their approach to this new car.  There’s no clear Bat-motif, other than what appear to be some subtle fins on the back of the car, which hints at the George Barris designed car from the 1966 TV series.  There’s a mean-looking engine at the rear of the vehicle that seems to give a nod to the usual jet turbine featured on other cars.  Also of note is that this Batmobile seems to step away from the cockpit design that has been featured on pretty much every previous Batmobile over the last 30 years and instead opts for more traditional car doors.

The images also give us our first official full look at the Batsuit after the tease that Reeve’s previously posted and spy pics of a stunt performer from the set leaked online, showcasing the full cowl, cape and overall aesthetic of the polished on-camera suit that Robert Pattinson will be wearing in the film. Seeing it all together, the Batsuit does appear more uniform and less cobbled together then the previous footage hinted at, which may be a result of this being the first look at the finished suit that is being used in the film, as opposed to one being used in stunt footage. The suit continues to have a real-world, tactical feel to it, with segmented armor/padding and a black utility belt with pouches straight from a police supply store.  The cape appears, not surprisingly, to be scalloped at the bottom and as the previously released footage suggests is draped over his shoulders and out of the way for all the fights scenes we are sure to get.

What does all of this tell us? While it would be wise not to jump to any conclusions without any actual finished footage from the film, the Batsuit and now Batmobile continue to suggest that this is going to be a very grounded take on the character. Given that the film continues to film on location in the UK, it’s very likely that the Batmobile is about to hit the streets of Scotland where more spy pics are bound to follow.