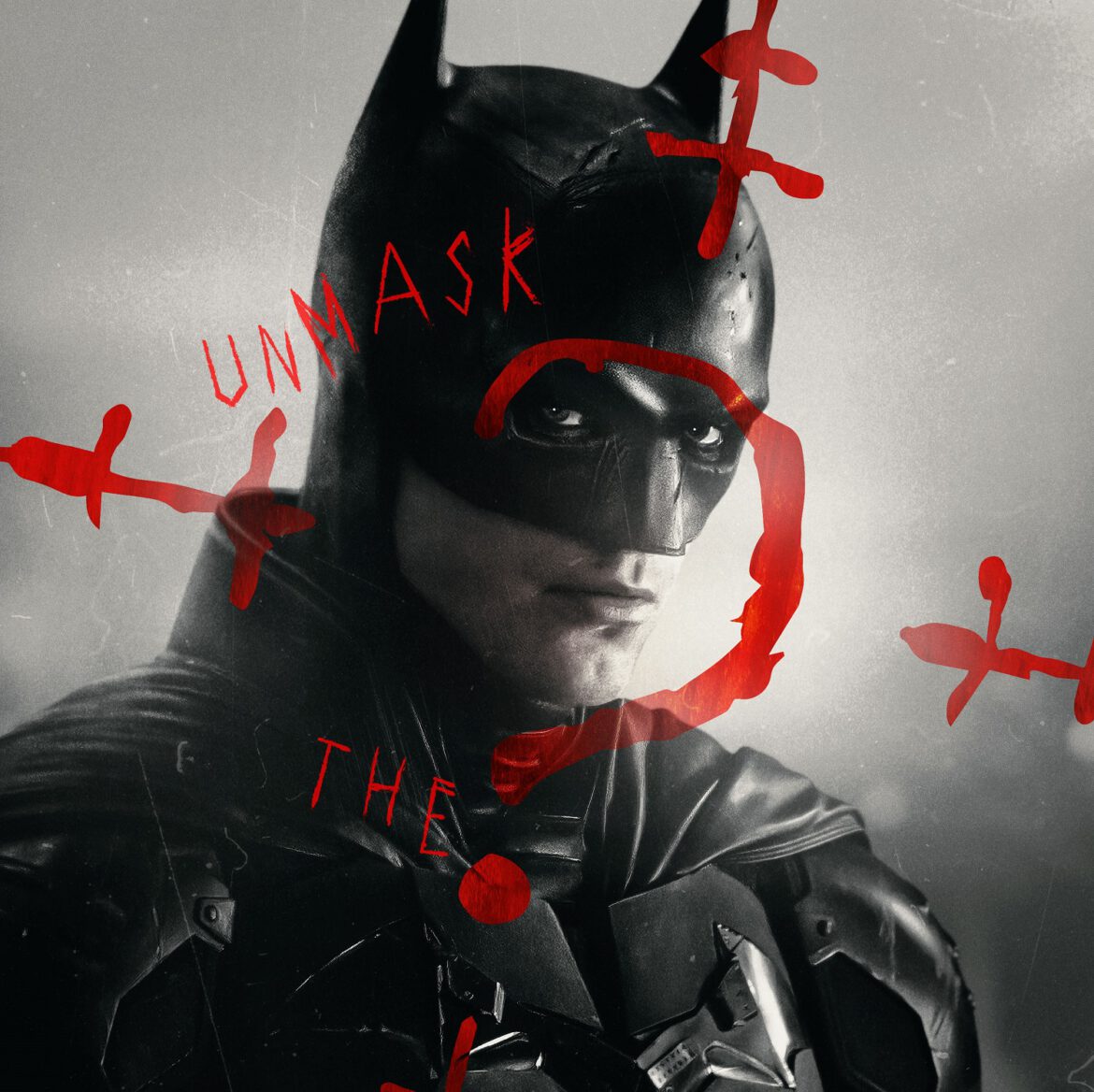 Overview: In The Batman, Robert Pattinson dons the cape and cowl to take on the Riddler, who is out to take down Gotham City’s elite in the Matt Reeves-directed project. Let’s dive into our spoiler-filled review of The Batman.

Synopsis (spoilers ahead): The film opens on Halloween night with the Riddler (played by Paul Dano) murdering Gotham City Mayor Don Mitchell. Lieutenant Jim Gordon (Jeffrey Wright) invites Batman (Robert Pattinson) to the crime scene, despite how the other police officers feel about Batman. Gordon brought Batman along because Riddler left a message for him. Commissioner Pete Savage shows up at the crime scene to force Batman to leave.

Back at the Batcave beneath Wayne Tower, Bruce Wayne and Alfred Pennyworth (Andy Serkis) crack the code that Riddler left and discover that placed a thumb drive in Mayor Mitchell’s car. The thumb drive contains photos of the Mayor leaving the Iceberg Lounge with a woman who is not his wife. Riddler later murders Commissioner Savage in a trap involving rats in a Saw-style maze with a riddle implying that there is a rat who helped GCPD bust-up Salvatore Maroni’s drug operation.

Batman heads to the Iceberg Lounge to question the Penguin (Colin Farrell), who works for Carmine Falcone (John Turturro), to see if he knows anything about the Riddler or the murders of Mitchell and Savage. Before he meets with Penguin, Batman takes out some thugs in an awesome fight scene in the club. Penguin says that he knows nothing, but Batman takes notice of the waitress who is interested in Batman’s conversation with Penguin. Batman follows her and notices she lives with the woman who was in the photos with the mayor. The waitress is Selina Kyle (Zoe Kravitz), and she goes to the mayor’s house to retrieve her friend’s passport from the mayor. Batman recruits Selina to help him get information at the Iceberg Lounge by giving her contacts lenses that allow him to see what she sees. While there, she runs into District Attorney Gil Coulson. However, after running into Falcone, Selina stops helping Batman for the night.

While leaving the club, Coulson is abducted by the Riddler, who straps a bomb around Coulson’s neck and sends him in an out-of-control car to interrupt Mayor Mitchell’s funeral. The GCPD clears out the people while Batman enters to try to help Coulson. The Riddler strapped a phone to Coulson’s hand, so he could talk to Batman. Riddler live streams the conversation and says that he will disconnect the bomb if Coulson can answer three riddles. Batman helps answer the first two, but Coulson refuses to answer the third because it would give away the informant and bring down so many more people than himself. The bomb goes off and knocks out Batman who wakes up in GCPD headquarters. With the help of Gordon, Batman escapes the cops, and Gordon and Batman both decide that Penguin must be the informant. They trail Penguin to a drug deal and discover that Maroni’s operation never ended. Batman sees Selina stealing money from Penguin, and she discovers her friend murdered. She is distraught as Penguin tries to escape. In an incredible car chase, Batman, in the Batmobile, bursts through flames in that amazing shot that we have seen in the trailer. Batman and Gordon question Penguin and learn he is not the informant, but Penguin helps them figure out Riddler’s next clue.

Gordon and Batman follow Riddler’s trail to the old Wayne Manor, which served as an orphanage until it burnt down many years ago. There they learn that Riddler was at the orphanage as a child and that Bruce Wayne is his next target. Batman is rushing home but not before a letter bomb goes and puts Alfred in the hospital. Riddler then leaks evidence that Thomas Wayne hired Carmine Falcone to murder a journalist (whose last name was Elliott – Hush!) who was threatening to leak information about Martha Wayne (who was Martha Arkham before she married) and had a history of mental illness in her family. Bruce confronts Alfred when he wakes up in the hospital about this information and tells him that Alfred lied about how pure and righteous his father was. Alfred tells Bruce that Thomas wanted Falcone to intimidate the journalist and was planning on turning Falcone to the police, but then he was killed. Alfred was implying that Falcone had Thomas and Martha murdered. Bruce takes Alfred’s hand but then sees the Bat-signal in the sky.

It wasn’t Gordon who lit the signal but Selina who caught the dirty cop who had her friend killed. There, they learn that Falcone is the informant that Riddler is leaving clues about. They also learn that Falcone is Selina’s father. Selina plans to kill Falcone for the murder of her mother and everything else that he has done to the city. Batman is able to stop Selina and plans to arrest Falcone. As Batman and Gordon are leading Falcone to the squad car, Riddler shoots and kills Falcone. Riddler escapes, but as Batman and the GCPD are investigating his apartment they get a tip that he is at a local diner. Riddler gives himself up and is revealed to be Edward Nashton, who is a forensics accountant.

Nashton is brought to Arkham State Hospital where Batman finally has a face-to-face with him. It is unclear if Nashton knows that Batman is Bruce Wayne (I think he doesn’t, but I could see it the other way). Riddler talks about how he was jealous of Bruce Wayne as a child and that Bruce was an orphan who was still rich while Nashton was ignored in the orphanage. Nashton wanted to partner with Batman to take down crime and corruption together. Batman rejects the notion that they were partners in this fight.

While searching Nashton’s apartment, Batman discovers a plan to have bombs explode all over Gotham, causing a flood. Batman also sees that Riddler has developed a cult following on the internet, and those followers plan to murder the new mayor at a rally at Gotham Square Garden. The bombs explode, and the arena is set up the be the shelter for people as water is flooding the city. Batman is able to take out most of Riddler’s thugs with the help of Catwoman. At one point, Batman is knocked out and disoriented. Selina is about to be killed, but then Batman injects a green fluid that brings him back and saves Selina. Any comic book fan had to immediately realize it was something close to the venom steroid that Bane uses.

In the aftermath of the attack, Batman helps save the people and decides he is going to be more of a symbol of hope than vengeance. Selina tells Batman that Gotham can’t be saved and decides to leave the city. She tries to get Batman to come with her, but he can’t leave his city behind. While in Arkham, Nashton makes a new friend, and they share a nice laugh together.

Analysis: This film was well worth the wait and deserves all the hype it has received. It is truly a great psychological thriller. The cast and director Matt Reeves are all on the A game for this. Matt Reeves shot this movie beautifully. It is so unique with gritty and grimy visuals, but it’s very colorful it is in certain parts. The first appearance of the Riddler is a bit of a jump scare and is framed great by Matt Reeves. The Batman fight scenes were great, and the Batmobile chase might be my favorite scene in the film. Reeves also planted some great Batman Easter eggs throughout the film. Don’t think I didn’t notice the bust of William Shakespeare before Alfred almost got blown up.

Robert Pattinson spent the most time in the Batsuit than any other actor before him. I would guess that he is in the Batsuit maybe eighty-five percent of the time, but it could be more than that. Even when he was out of the Batsuit, he still was Batman. He didn’t care about Bruce Wayne at all. That is interesting because him evolving and realizing that he can help the city just as much as Bruce as he can as Batman is something that can be explored in the future. It sets up the potential for really great character growth. Great job by Pattinson.

Zoe Kravitz was great as Selina Kyle/Catwoman. Her chemistry with Batman seemed to come right from the comics. We truly have not had a bad on-screen Catwoman paired alongside Batman. I could totally see Kravitz getting her HBO Max show or even her own movie coming out of this.

I really enjoyed the Gordon/Batman relationship in this movie. They were always at each other’s side and rarely made a move without the other. Jeffery Wright’s Jim Gordon wasn’t a bumbling sidekick either that was just along for the ride. You could tell these two had history and that Batman really trusted him.

Paul Dano. What a performance. It wasn’t Heath Ledger/Joker level, but he did a great job. The trailers did a great job of making him scary. I did not expect him to be as charismatic as he was in the actual movie. His Riddler seemed to be like the Frank Gorshin 1966 Riddler but on steroids. Truly creepy and truly menacing. We will never listen to Ave Maria the same way again.

Also, we can’t forget about Colin Farrell as the Penguin. He stole the show in the short time he was in it. (“Take it easy, sweetheart!”) His story was that he is going to try to take up the power vacuum left by Falcone’s death, and I can’t wait for that spin-off series.

I can’t say enough great things about this movie. It is very much an all-time Batman story. Personally, I still have The Dark Knight as my number one Batman movie, but for this movie to enter the conversation shows how great it is. It is great as a single story, but this movie sets up a lot of things for the future. Batman is back to being in the front of everyone’s mind and back to being the dominant movie character in all of comics. (There could still be something else revealed as a certain website is still loading as this is being published.)

Editor’s Note: We hope you enjoyed this spoiler-filled review of The Batman. The Batman is in theaters now and you can buy your tickets now.

The Batman is an all-around fantastic comic book adaptation with an exceptional cast, great atmosphere, and an exciting detective-driven story.