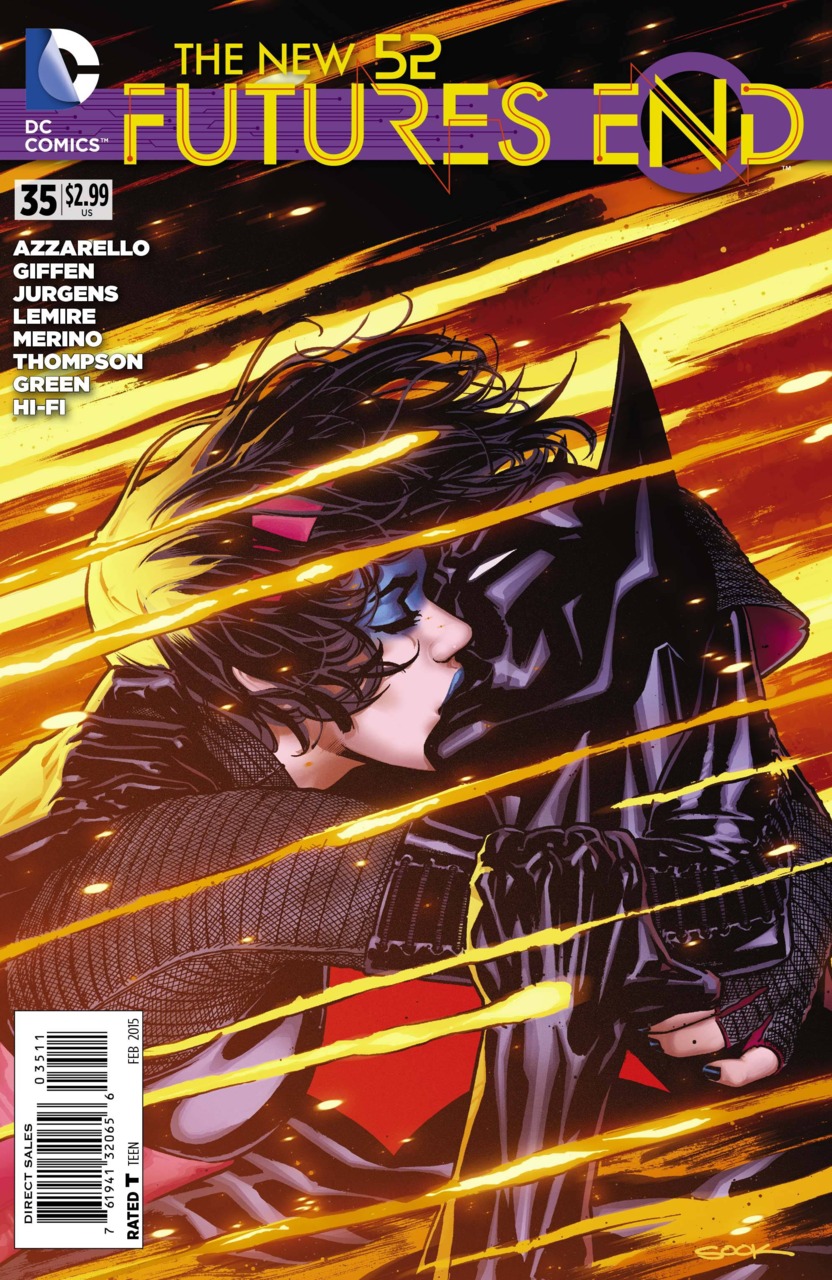 Five years from now our issues open in Seattle where we see Lois Lane giving a press conference regarding the events on Cadmus Island in the previous issue. Over on Green Arrow Island, Ollie is enjoying officially being retired and welcomes Animal Man and his family who come to join him.

We then cut to Siberia where we see John Constantine conversing with Superman, when they are suddenly attacked by what can only be described as a Brainiac controlled, cybernetic (at least I’m assuming) bear. The bear talks to Superman cryptically before self destructing and exploding, Superman asks Constantine what he needs to do to stop this monster…and he replies that he needs to return home.

Meanwhile at the ruins of Cadmus Island, we find that King Faraday is examining the remains of the lab and searching for the DNA storage vault. However, he is waylaid when he discovers that that portion of the island has sunk beneath the water.

Our last pages of this issue occur in Pittsburgh, where we see Madison Payne (the new Firestorm) trying to separate herself from Jason Rusch. It doesn’t seem to work and she takes to the skies, passing the funeral of Ronnie Raymond who died in the previous issues. She flies past as Jason tells her that she needs to speak to Cal regarding her still being alive. She decides that she won’t because of the uncertainty of what his happening to her regarding her transformation.

In the next issue, we find Plastique and Terry McGinnis discussing their escape from Batman, while Plastique tries to understand the meaning behind it all. Terry explains that the older Batman told him to stay away from the present day Batman as he would attempt to stop Terry’s mission.

Over at Terrifitech, Michael Holt and Bruce Wayne are having a meeting to discuss the release of the uSphere to the public. Holt ignores Bruce as he begins to broadcast a message to all of NYC, a message that lets everyone know that the uSphere will be available specifically to the city before it is released to the rest of the world. The broadcast finishes and Holt thanks Brother Eye for making the suggestion of the early release…people are already lining up for his product.

Over the next few pages, we get caught up very quickly on the other characters in “Futures End” – Grifter gets a new identity as Lana Lang’s husband; Fifty Sue is angry that Deathstroke died and takes his mask as revenge against Brother Eye; we find that Doctor Yamazake has survived the explosion in his lab and now has the ability of metal manipulation; and finally in Earth Orbit, the Stormwatch carrier finally returns and gets pulled in by tractor beam to the Ant Farm (base of operations for S.H.A.D.E.), there we discover that Father Time has been waiting for them and needs the rescued Engineer to help stop Brainiac from invading Earth.

Not willing to have Engineer be used by Father Time, the rest of the crew (Amethyst, Frankenstein, Atom, Hawkman and Black Adam) engages Father Time and his assembled monsters. The Atom, however, takes matters into his own hands and shrinks down and enters Father Time…only to discover a parasite that is Time’s true form.

Meanwhile in New York, Terry McGinnis has A.L.F.R.E.D. on the constant lookout for Brother Eye…if he is still present, then the future hasn’t been changed. As Terry is talking, we see a montage of images that show Brother Eye has survived in Lois Lane’s cell phone, and begins spreading through the computers all of the world. Eye eventually finds what he is looking for – the futuristic corpse of Plastique that showed up with Terry when he arrived in the past all the way back in the beginning of “Futures End.”

This issue ends with Jason Rusch teaching Madison how to use her new Firestorm powers. They sneak back into Yamazake’s lab to find out what might have been different about their fusion (as they still cannot separate apart). They are surprised suddenly by Yamazake who has used his abilities to construct a suit of armor to contain himself in, and announces that he has christened himself Doctor Polaris.

In our next issue, Polaris and Firestorm engage in battle as Jason tries to teach Madison how to fight back against the powerful opponent. Polaris ends up throwing a cement mixer truck at Madison who (prompted by Jason to think of something soft) ends up turning it into a giant teddy bear…however, the size and mass of the bear ends up nearly crushing Firestorm into the ground.

Back in orbit, the Atom is deep inside Father Time talking to his parasitic form while the remaining heroes continue to fight against the monsters. Atom ends up producing a Shrink R.A.Y. and uses it on Time. Atom comes bursting out holding Father Time’s true form and declares himself the new leader of S.H.A.D.E. Time tries to reason with Frankenstein to help him, but he is suddenly shot in the back by a S.H.A.D.E. agent…Amethyst comes to his side and realizes that Frank is dying.

Our issue ends with Terry still on a rooftop asking A.L.F.R.E.D. to keep searching for Brother Eye’s presence…this is interspersed with a scene taking place in the future where we discover that Michael Holt and Brother Eye have successfully merged Batman and Joker into one body, all controlled by Eye. He is sent back in time to stop Terry McGinnis from succeeding in his mission, and the issue ends with A.L.F.R.E.D. suddenly beginning to shut down and the future Batman-Joker reappearing in the street in front of Plastique.

Our final issue opens on the image of giant teddy bear. Having survived the crushing stuffed toy, Firestorm continues to fight against Polaris in battle. Nearby, Cal Corcoran (Tim Drake) witnesses the battle and rushes in to help…slightly confused as to how Firestorm is still alive. Polaris injures Tim and Firestorm sweeps him into the air as she causes Polaris’ armor to explode. She lands Tim safely on the ground, kisses him, tells him she loves him and flies off into the night.

We then cut to Las Vegas, where we catch up with Fifty Sue and Lana Lang. In the previous issue, Sue had disintegrated a man’s hand for refusing to cooperate with the plan to find the lost DNA vault from Cadmus Island. Lang had grown extremely upset at the use of Sue’s powers and here we discover that Lana cares a lot for Fifty Sue and demands that she start acting like a child and not a monster.

Up in orbit, Atom is examining Frankenstein’s body and discussing with Amethyst as to his condition. It seems that when he replaced Hawkman’s arm with Frank’s the Nth metal entered his blood stream and started to combat whatever it is inside him that makes him immortal. We also find out that the takeover of S.H.A.D.E. is going smoothly as a lot of the agents were being blackmailed by Time to work for him. Atom admits that whatever is wrong with Frank is beyond science, so Amethyst picks up his body…set on returning to Earth and delving into the realms of Magic to help her friend.

Well, it seems that “Futures End” is still going full steam in regards to all of their stories…I had figured that a few of them would start wrapping up as we only have a few months left in the stories, but that is definitely not the case. Overall these issues are pretty well written, the stories are fairly easy to follow and we are provided with some brief recaps of what had happened previously. My only concern is that I’m still not sure as to why some stories are being told. Specifically regarding the Fifty Sue-Lana Lang-Grifter arc, and the S.H.A.D.E.-Atom-Frankenstein-etc arc. What is the purpose of finding this DNA vault that Cadmus had on the island? Yes it contained the samples from a lot of the Earth 2 heroes…but where is this playing into the overall story? And why do we need to two huge villains? Brainiac and Brother Eye seem to be a bit much for this story arc, and I feel that this could have been left out all together.

I’m hoping that some of this begins to get a bit clearer as our storylines begin to wrap up. And I am really enjoying all of the Batman Beyond stuff, especially now that he has lost A.L.F.R.E.D. and the Batman-Joker is hunting him.