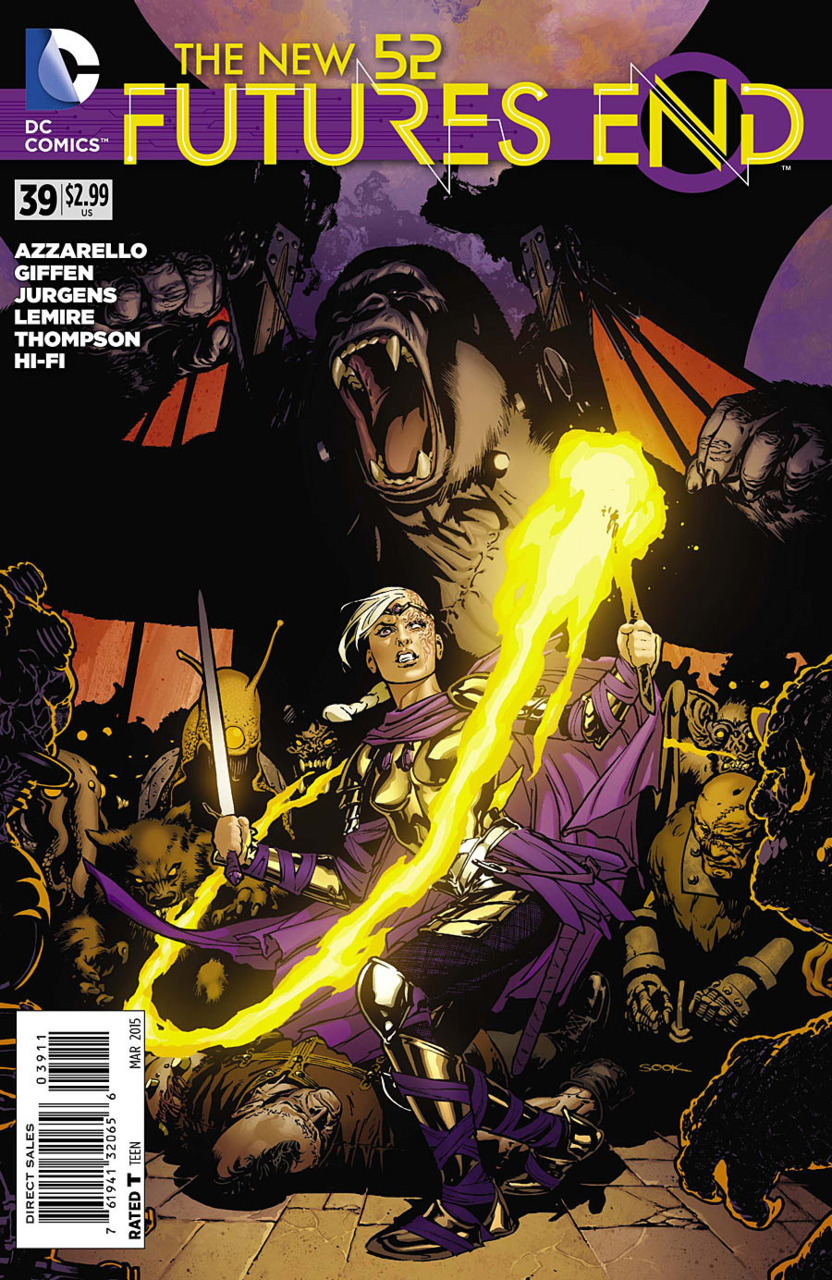 This month’s issues of “The New 52: Futures End” opens with Amethyst and Frankenstein who has been brought to the House of Mystery in order to be healed. Madame Xanadu, Zatanna and Deadman attempt to heal Frank with magic…but it is discovered that they cannot help him. Amethyst becomes despaired because Frank’s deterioration is “beyond science…beyond magic.” John Constantine shows up and says that he has a way to help, however Amethyst is overcome with anger towards John as he was complicit in the destruction of Gem World. In retaliation she stabs Constantine threw the chest with her sword.

On the ocean floor, Fifty Sue discovers the location of the vault containing the DNA samples that was lost during the destruction of Cadmus Island. Back in Vegas, Sgt. Rock discusses with his allies on how to recover the vault. Fifty Sue arrives and after arguing with Rock on whether the government has managed to also locate the vault, Sue transports the vault to the top of the building that they are on.

Over in Smallville, Constantine awakes and talks to Midge about the “dream” her was having. She asks if it involved her master (Brainiac) and he responds that it doesn’t. He asks where Clark went and finds him out walking the streets. They discuss how Smallville is a location that Brainiac chose because it is a focal point for those who “do good”…they are drawn to it.

Back in New York, Terry McGinnis and Plastique manage to escape the Joker-Batman from the future. They land on a rooftop and discuss the recent events, they decide to wait for the return of Tim Drake in order to gain some help in stopping the future…meanwhile Batman spies on them from another roof.

Up on the League Defense Station, Stormguard and Super/Shazam discuss the events of the past several weeks…as well we get a bit of backstory on how Stormguard first took up the fight against evil. It seems that he was a member of the army and was defending the White House during the first invasion…he was almost killed by a Parademon, but managed to kill it and take its weapons. It was here that he rallied the forces around him and fought back. The issue closes with the teleporter activating and the new Firestorm stepping out of the tube.

The next issue opens back in the House of Mystery where the stabbed Constantine reveals that he is only an astral projection, and therefore cannot be hurt by Amethyst’s sword. We get a bit of backstory on how Constantine destroyed Gem World in order to contain the invading Parademon horde…something that Amethyst will not forgive him for. He then reveals that Frank will needed to be taken back to his birthplace…back to Castle Frankenstein.

Back on the satellite orbiting Earth, Firestorm introduces herself to Super/Shazam and Stormguard and explains that she has been dealing with Doctor Polaris. However, several alarms soon sound and it is revealed that Polaris is once again wreaking havoc in order to draw the attention of the League. Stormguard and Super/Shazam take him on in battle, while Firestorm attempts to use the League teleporter to separate herself from Jason Rusch.

Over in Las Vegas, the vault that Fifty Sue teleported to the top of the building ends up crashing down towards the pavement due to its large size and weight. Rock and the others start to freak out due to the attention being drawn by the accident. Fifty Sue manages to teleport herself, the vault and Grifter and Lana Lang away before Rock can contain them.

This issue closes back in NYC where Tim Drake finally arrives back at his bar. Terry and Plastique confront him to discuss their plan…but not before the Joker-Batman arrives and begins shooting at them.

Our next issue picks up right where the previous finished. Batman Beyond springs into action to shield Tim from the barrage of bullets unleashed by Joker-Batman. They are soon joined by the present day Batman and the group attempts to subdue the robotic monster. It seems they win when Plastique hurls a charged brick which explodes near the Joker-Batman and knocks him out. Terry reveals that he is attempting to prevent a catastrophic future. As the Joker-Batman begins to revive, Terry takes off to draw him away…while Plastique, Tim and Batman head off to T-Tech.

In Metropolis, Doctor Polaris continues his assault and traps Stormguard in a magnetic field. However Super/Shazam swoops in and knocks Polaris flying. Firestorm arrives (having failed in their attempt at separation) and stops Super/Shazam from ripping Polaris apart. She explains about how Polaris is angry due to his wife’s death in a fire in Japan during the war, and how he believes the League to be responsible since they didn’t want to share the teleportation technology with the world. They come to the conclusion that if Polaris can safely separate Firestorm, then he can have the technology to distribute to the world.

We then cut to the Sahara Desert where Fifty Sue has teleported her “family” and the DNA vault. Grifter and Lana discuss what to do with the vault and with Sue herself.

The issue closes with Amethyst and Frank arriving at Castle Frankenstein…only to discover that the good doctor himself is still alive?!

In our final issue this month, the League arrives back on the satellite with Polaris in tow. Firestorm and Super/Shazam argue about whether to set Polaris free and grant his request…but Firestorm surprisingly agrees with Polaris’ standpoint – if the League had shared their tech, then his wife (and many others) may not have perished.

We then cut to Smallville, where we find Midge, Clark and Constantine attacked by more Brainiac controlled robots…this time made up of…corn? They manage to stop the robots, but not before Midge is fatally wounded. She then reveals that her master is planning on attacking and seizing control of New York. Clark flies off before Constantine can say anything to him.

At Castle Frankestein, Frank and his creator discuss Frank’s condition. He reveals that he can save him, but it would mean giving up his individuality and becoming Doctor Frankenstein’s greatest soldier…a slave. Frank decides to die instead of becoming a slave…he has seen the future and does not want to become the monster that he saw himself as. In accordance with his wish, Amethyst cuts off the Doctor’s head and destroys his remaining monsters. Frank then tells Amethyst that she needs to burn the Doctor’s body in order to prevent his return…and then to bring lots of paper, he wants to tell his story before he dies.

Our issue closes back on the League satellite where several alarms begin to sound. Super/Shazam is appalled to discover that Brainiac has arrived.

This story is getting great…I can feel the momentum starting to really pickup as we get closer and closer to the ending of this story. As always, it can be a bit confusing to remember what is going on with the many story arcs…and one should definitely read these issues a few times in order to fully get what is happening.

These issues are collectively written by a group of writers who are doing a fantastic job at balancing out which stories get page time…and which ones can get held off for an issue or two. As we get closer to the conclusion, we see that several storylines are wrapping (or have wrapped) up and even merged together. However there are still some plot threads hanging in the ether: how will Terry McGinnis and co. stop Brother Eye from taking over? Was it a wise decision to bring the present day Batman into the loop? Because didn’t A.L.F.R.E.D. and future Batman warn Terry not to? Also what is the big thing about this DNA that Fifty Sue is carting around…I mean yes, I get it contains the samples of most of the world’s and Earth 2’s super heroes…but how will this help in the coming battles? Will we see deceased heroes return from the grave? Is this maybe what Brainiac is after? Or does Brother Eye need this vault to create his weird robotic creations?

Overall this is quite an excellent story, with many twists and turns…who knew that Firestorm would actually agree with Polaris’ end goal, mind you she didn’t approve of his methods. And did we really need to see the hook up between Terry and Plastique…don’t we have enough going on?

Well I guess we will need to see next month and the coming weeks for all the answers to the big questions.