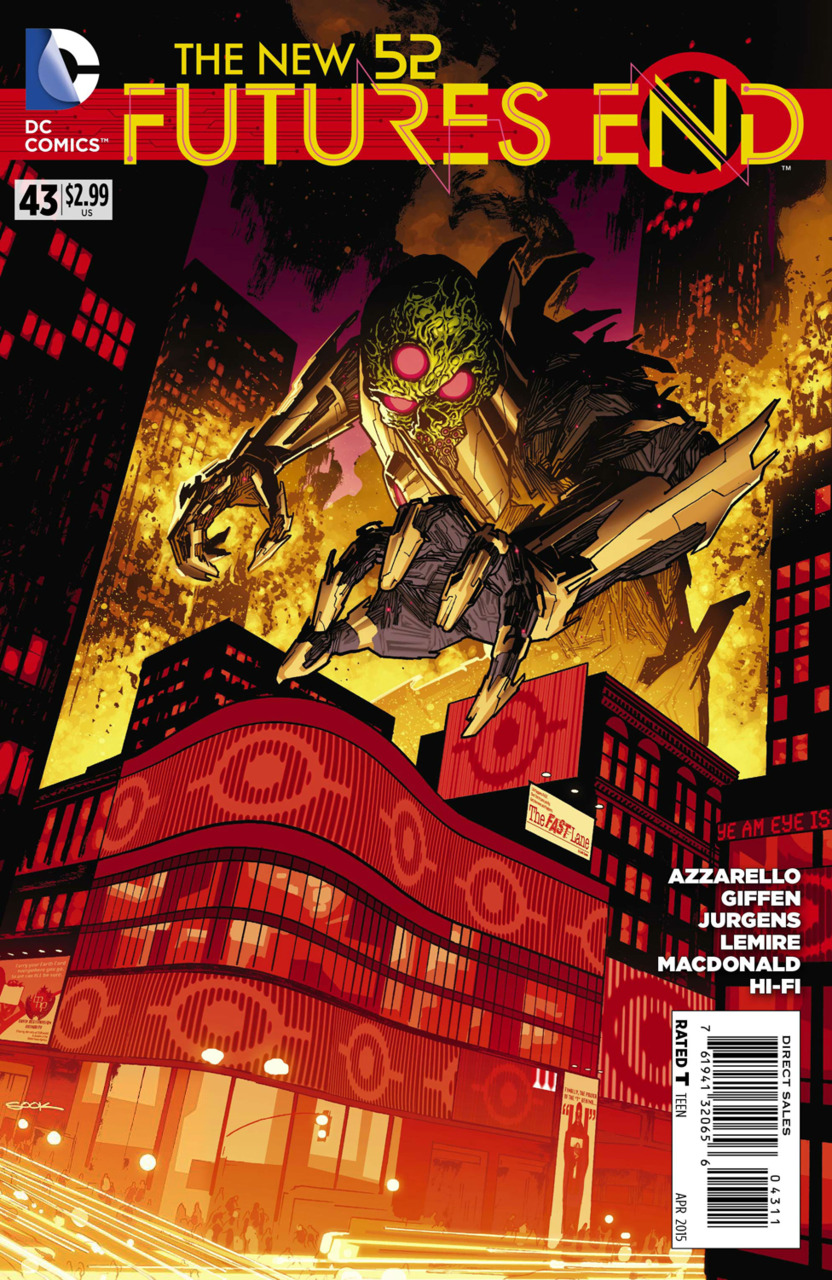 This month’s stories from “Futures End” begin with a blue/red streak speeding across the skies of Kansas, bursting through a door on a farm and grabbing a Superman t-shirt out of a closet. We then cut back to John Constantine who summons a giant beast to combat against the Brainiac controlled corn robots.

We then cut back to the Justice League satellite where the heroes are gathered to see what is causing the alarms to sound. However the situation quickly clarifies as Stormwatch arrives carrying Atom, Hawkman and the Engineer. Atom declares that Brainiac is on his way and that is what set off the alarms on the satellite. Suddenly, Engineer seems to become controlled by Brainiac and starts attacking the heroes aboard the Stormwatch carrier. Meanwhile Cyborg starts to shout orders for the various assembled heroes to prep for action.

As Firestorm and an imprisoned Dr. Polaris look on a monitor, several large spheres began to rain down upon New York City…impacting several targets and causing massive damage. We also see Batman, Tim Drake and Plastique avoiding the raining spheres as they come down around them. As they make their way towards Terrifitech, they enter to find several dead bodies spread across the lobby.

Back on the Stormwatch carrier, Hawkman and Atom attempt to stop Engineer from attacking them and she ends up escaping and heading towards the Brainiac construct that has appeared nearby in orbit. As the League begins to separate in order to combat against the Engineer and Brainiac as well as help with the destruction raining down on New York, Cyborg ends up ordering Super/Shazam to stay aboard the satellite with Firestorm to watch Polaris.

As half the heroes head into space, Engineer seems to merge with the strange phenomenon to form a giant Brainiac ship. We then see that the spheres released by the construct in space begin to sever power to the city and start to generate a forcefield surrounding its perimeter. As the field begins to come down around them, giant machine towers erupt from the surface and generate an enormous Brainiac body that towers over the city. The issue ends with several fighter jets flying towards New York as Superman flies past them…heading towards those in danger.

The next issue begins with the giant Brainiac releasing even more spheres which continue to wreak havoc around the city and fill in gaps of the forcefield being generated. As Lois Lane looks into the sky wondering if someone will be able to help them, Superman comes crashing through the field and heads straight for Brainiac. However he is quickly blasted by one of the spheres and is hurled into the river.

Back in space, the League and Stormwatch continue to fight against the Brainiac ship and Hawkman is suddenly blasted by it. As he is hit, he seems to get flashes from different points throughout the multiverse as we see images of the original Justice Society of America, the Superman from the “Red Son” universe, as well as images from the modern era of DC comics. As he screams for Shayera, Hawkman seems to phase through some of his various appearance before disappearing altogether.

At Terrifitech, Brother Eye asks Michael Holt if he likes what he sees and Batman and his allies continue to comb their way through the scattered bodies. Tim wonders at one point way the building still has power while the rest of the city has been cut off…Batman theorizes that something else must be running the power independently. As the forcefield starts to close on them, Brother Eye asks Holt if he can describe what he is seeing. Holt looks on in horror as his city is attacked, and Brother Eye continues to spout off how (as a machine) everything exists at once for him…he is created and destroyed in the same moment. As Batman finally makes his way to Holt, he turns to him and states that he is happy Batman is there to witness these events with him.

Cutting back to the satellite, Super/Shazam demands to be teleported to the surface to help with the fight…but due to Brainiac’s interference it is impossible. However, Polaris ends up helping the heroes and the three teleport to the surface and jump into battle. Just as they arrive, the machine being controlled by the giant Brainiac on the ground and the orbiting ship establish a connection. The beam emitting from them ends up hitting Super/Shazam who is saved by a revived Superman. In space, the Atom is apparently obliterated in the beam.

The next issue opens up with Cyborg ordering the remaining heroes to return to the Satellite and Super/Shazam and Superman are teleported inside the forcefield by Dr. Polaris. The heroes then jump back into action against Brainiac…but not before Shazam transforms into his former identity as the real Superman is there…as they fly off, Superman comments that Brainiac isn’t trying to destroy NYC, but take it.

Cutting over to Terrifitech, Holt seems to have lost his mind as he tells Batman that he’s been talking to a god and has helped to usher them into a new future. As Batman knocks him to the ground, he pulls out a drive and orders the computer to initiate the “Palin Protocol.”

Across the city, Terry McGinnis continues to fight against the Joker-Batman robot. He yells at A.L.F.R.E.D. to try and get him to reactivate and analyze the pattern of the falling spheres, Batman Beyond continues to dodge and battle the robot. Back in space, Cyborg attacks the Brainiac ship as we realize that the Atom has survived and managed to shrink down in order to enter the ship and find Engineer. As he weaves his way inside, he too sees various flashes of the DC multiverse.

We then cut back to NYC and see various shots of Shazam and Superman battling against the giant Brainiac before Superman is blasted through the Earth’s surface. We also see the Atom find the Engineer and begin to separate her from the Brainiac machine controlling her. As the ship begins to shut down, the connection between the two Brainiacs is severed. The issue ends with Batman Beyond using A.L.F.R.E.D. to triangulate a falling sphere using it to destroy the Joker-Batman…and as he looks up Brother Eye peers down from the monitors of Times Square and announces to the world that he is there to protect them.

Our last issue opens with Lois coming to Superman’s side as he rests among the rubble of NYC. Still unconscious, she manages to rouse the Man of Steel and the two of them briefly discuss where he has been since the end of the war…but turns rather cold when Lois mentions Batman. We cut across to Brainiac who reforms the machine emitting the beam into space and takes manual control of it.

As Terry flies through the streets, Brother Eye continues to watch from every screen surrounding him and tells New York that it will save them. Back in Terrifitech, Batman talks with Eye about the damage inflicted upon New York. Elsewhere in the building, Plastique and Tim Drake run across Key and Coil who discuss how a robot came out of nowhere and slaughtered everyone inside the building. They are suddenly ambushed by the future robotic Plastique and the heroes engage her in a fight, Batman Beyond arrives and enters the melee…but it suddenly ends when the robot realizes it can’t destroy its present day body, otherwise it wouldn’t exist. Present day Plastique uses this pause to destroy the robot. After being rescued by Terry, the two share a passionate kiss.

The issue ends with the giant Brainiac beginning to lift New York City away from the Earth and Michael Holt finally realizing the damage that he has caused.

Well I believe it’s safe to say that the battle for earth has begun. Overall I am enjoying the action taking place in this series, it keeps everything face paced and easy to read. The only downside is that I am anxiously awaiting some clarification on how these events are connected…it sometimes seems that some events are happening for one particular reason in one issue, and then changes for some reason in the next. I had originally believed that Brainiac and Brother Eye were working together, but now it seems that they are being pitted against one another…or that Brother Eye is manipulating Brainiac into attacking Earth. Either way I hope that everything gets resolved neatly in the coming month.

Overall this has been a good weekly series, but like “Batman Eternal” I feel that this series attempted to spin a few too many stories all at once…and then overall everything came off as “good” rather than “awesome.” I’m sure that with a conclusion so close to us, that my opinion will probably change very soon…I just wanted to point out that I think “Futures End” could have used just a bit more focus on certain stories, and completely dropped others.