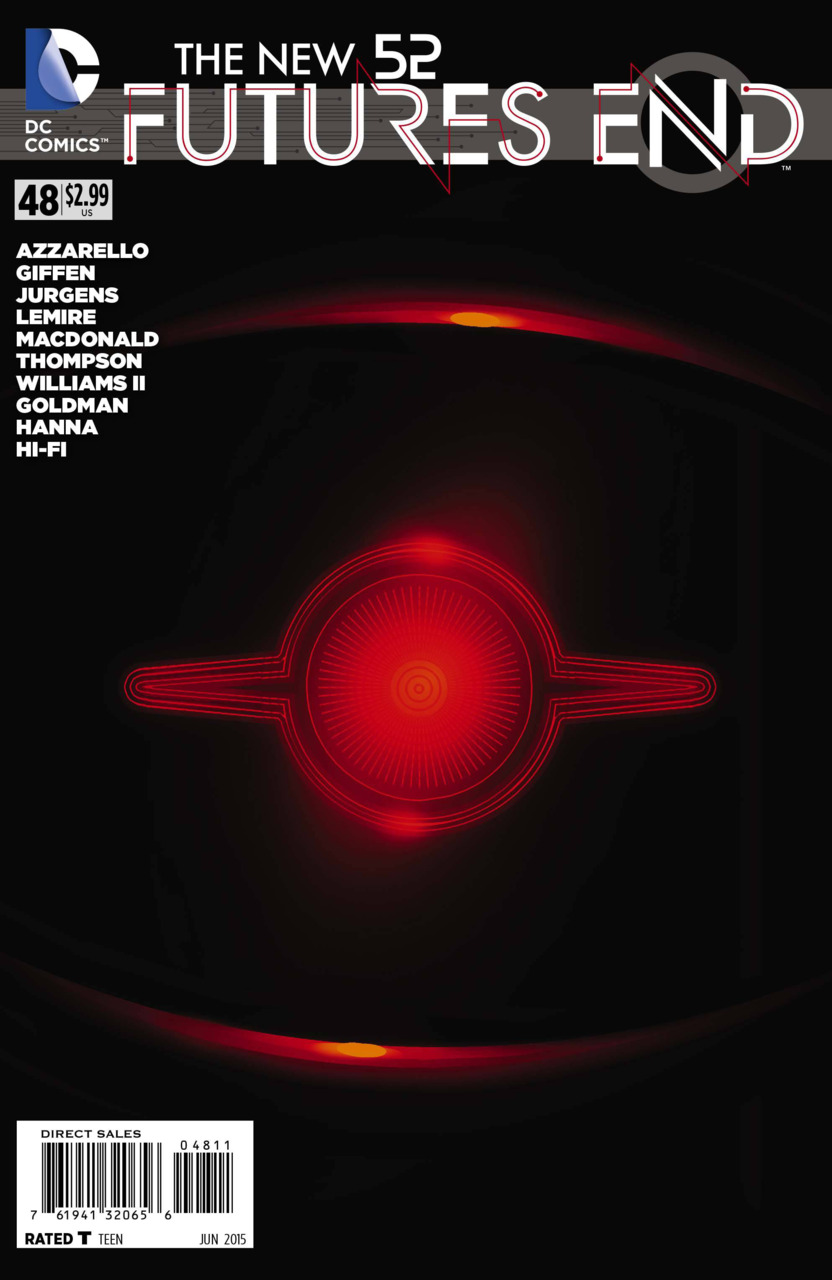 As New York City floats into the air, the final chapters of “Futures End” begin. At Terrifitech, Michael Holt is busy staring at several monitors showcasing the rising city as well as the many heroes attempting to attack the giant Brainiac. As the Atom arrives, Batman reveals that he has a plan to combat the new threat. Back on the ground, Superman and the remaining members of the Justice League are busy evacuating civilians from the collapsing buildings. Superman quickly uses his heat vision to secure one of the buildings he is holding, and then flies off.

Back at Terrifitech, Terry McGinnis, Plastique, Tim Drake and others are busy watching the devastion spread across the city as they discuss Terry’s original plan of travelling back in time and destroying Brother EYE…however, several floors above them Batman reveals his plan to combat Brainiac – activating the Brother EYE program.

Cutting back to the battle, Superman engages Brainiac in battle and the two titans trade blows. As the Man of Steel punches the Collector of Worlds, we get another brief glimpse of several versions of Brainiac from across the Multiverse. As he collapses to the ground, thousands of Terrifitech’s T-Spheres descend on the villain…all being led by Atom and controlled by Brother EYE. As the T-Spheres reduce Brainiac in size, Atom succeeds in trapping him within one of the spheres.

With the villain defeated, New York begins to plummet through the air as the controls being used to levitate the city are no longer manned. Realizing the danger, Superman dives through the ground and ends up coming out underneath the city…safely bringing it the ground. As the next issue opens, we return to a dying Frankenstein who is busy telling his story to Amethyst. As Frank finally passes away, Amethyst mourns her lost friend and vows to retake Gemworld as she buries Frank and takes up his sword as a promise.

Cutting back to New York, we see the heroes analyzing the technology left behind by Brainiac…eventually decided to destroy it by hurling it into the sun. After his return, Superman has a brief reunion with Lois Lane as she welcomes her friend home.

Across the city, Mr. Terrific attempts to disengage Brother EYE from his systems…but EYE refuses the command. Throughout the building, Brother EYE begins to take control of the deceased guards and sets them on the heroes.

In the next issue, Batman and Terrific continue to attempt to dislodge Brother EYE as Atom questions EYE’s motives. As if on cue, Terry McGinnis comes through a window and reveals his mission to stop the sentient satellite. As the greatest minds in the DCU come together, they devise a plan to fix Terry’s time belt and repower it in order to travel to his original destination in time.

While they work, Terry returns to the others and helps out with encroaching horde of Brother EYE zombies. As if this wasn’t enough, the Joker/Batman cyborg from the future shows up and Terry engages it in battle once again. As the fight finishes as Terry sends the cyborg plummeting to the ground, he returns to the building only to succumb to some serious injuries. As Tim drags Terry inside, he asks the former Robin if would take his place in saving the future. As Plastique rushes to his side, the issue closes with the death of Batman Beyond.

The next issue opens as Brother EYE’s control continues to spread as we see images of his logo infecting various systems across the world. Back at Terrifitech, Brother EYE activates the defensive systems and begins to attack his “fathers.” A quick explosion reveals that Tim Drake has taken up Terry’s Batman costume. As Tim lifts everyone to the roof, they fill him in on the plan to travel back in time and stop Brother EYE. As Batman and Tim argue about which one of them will complete the mission, until A.L.F.R.E.D. reveals that the belt was calibrated for someone of a particular weight…one in which Tim (and not Bruce) matches. Having this discussion settled, Michael Holt reveals that he has contacted Firestorm who will be needed to power the time belt. As Madison arrives, Tim realizes that she is alive and quickly rushes to embrace her. After the two discuss the various events that have transpired, Tim prepares to travel through time and avert the impending disaster. As Firestorm powers the belt, many of the Brother EYE zombies rush the heroes in an attempt to stop them. As Bruce yells at Tim to leave, he disappears in brilliant flash of light.

Arriving in the present, Tim is aboard the Brother EYE satellite and starts to set charges throughout the room. EYE attempts to defend itself as Tim warns about the approaching Earth 2 survivors which will instigate the war with Apokolips…and thus cause the events of the “Futures End” future. EYE comes to the same conclusion and sets an auto self-destruct…just as EYE says that he can save Tim from death as well. Disappearing in another flash of light, Tim arrives in an unknown location and falls to the Earth.

The final issue opens with Tim looking up into a blazing sun as he looks around and sees several statues of various heroes looking down on him. As he looks around, he sees Madison tending to some flowers nearby…as he rushes to kiss her she dissolves into a holographic projection. As the scenery around him fades as well, Mr. Terrific steps forward and reveals that he has returned to 35 years in the future…and Brother EYE is still in control. As Tim realizes that he failed, several of the Brother EYE cyborgs arrive and attempt to capture him. However he and Terrific are rescued by several masked people. Escaping the building, the heroes are led by an aged Atom and they manage to get away before Brother EYE launches several missiles in an attempt to annihilate them.

Reaching their hideout, one of the rescuers reveals herself to an older Madison Payne (who also seems to be free of the Firestorm matrix). As Tim is overwhelmed by his emotions, he kisses her.

Climbing to the surface, the issue (and series) ends with an image of Madison showing Tim a devastated New York landscape with a lunar image of EYE watching down on them all. As she whispers that Brother EYE has won, Tim remarks “the hell he has. Not yet.”

Overall I have to say that I was really impressed with this series, started off a little bit slow…but managed to pick up quickly and keep me engaged throughout the entire run. Getting to see several of DC’s lesser focused on characters was a good choice and I liked that we got to see some epic battles between the Justice League and Brainiac/Brother EYE.

However…I feel that the ending was greatly disappointing. I’m not sure if it was a good choice to essentially make “Futures End” pointless. I was sad to see the death of Terry McGinnis and really loved that this futuristic version of Tim Drake chose to take up the mantle…however that seemed to be the only thing that survived this series as a whole.

Unfortunately when playing with time travel, you always run the risk of essentially wiping out the entire story that you spent (in this case) 48 issues telling. Although it was good to see Tim succeed in Terry’s mission, it seemed a little convenient that they managed to pull together the plan in the last three issues of the series. I honestly forgot about the original plot of Terry traveling to the present until Mr. Terrific reminded us.

I was also hoping that this series would somehow help setup “Convergence” as both of the stories involve Brainiac in one way or another. However, after his defeat he was quickly sealed away and forgotten about. Plus Tim changing the past altered the events of the future…so again, kind of wiped out that problem as well.

I will give props to the creative team on keeping me engaged in the story throughout these past months, as well as the artists…I really loved some of the images seen in this series. However, the ending really killed my rating.