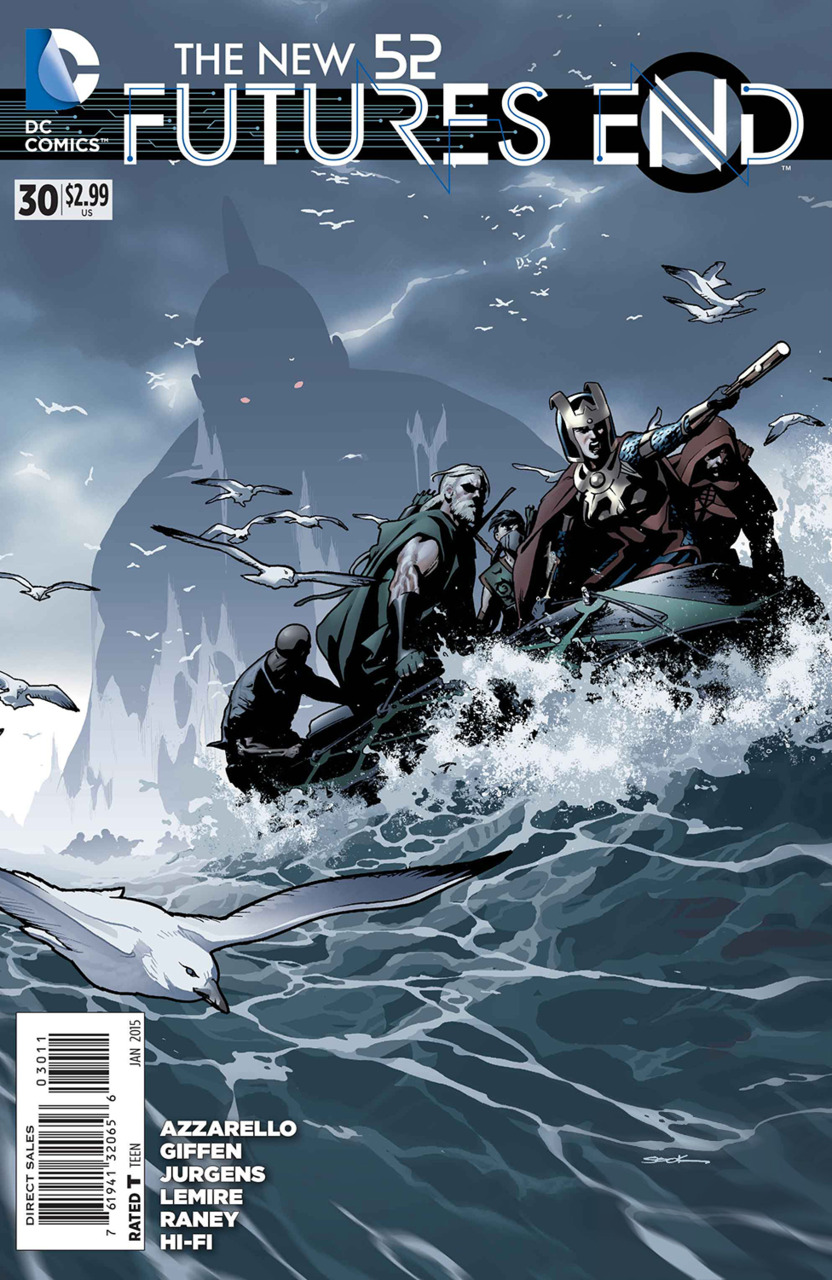 Five years from now our issues open with the heroes gathering together with Green Arrow to plan their assault on Cadmus Island, meanwhile Lois Lane returns home to find Cal Corcoran (Tim Drake) waiting for her. The two argue for a bit, with Tim trying to find his girlfriend Madison Payne who seems to be missing. Lois then brings out the package that she received near the beginning of the series which contains several mysterious objects…Tim explains how this package was intended for him and not Lois (the matchbook led Lois to Tim’s bar; the red arrow indicates the sender; the pyramid showed images of Cadmus Island; the coordinates indicate how to get there), Tim finally leaves stating that finding Madison is more important than running off to an unknown island.

Elsewhere on Cadmus Island; Deathstroke, Grifter and Lana Lang are busy hiding from OMACs and discussing a plan to destroy a DNA vault which contains samples of every living (and non living) superhuman on the planet…something they want to keep out of the hands of Brother Eye. The scene then cuts to Green Arrow and the Outsiders on a boat headed for Cadmus as they watch images of the OMAC army guarding the island.

Over in Manhattan, Plastique and Terry McGinnis are having a drink at the Wounded Duck as a cover to search for Cal Corcoran. Terry then dons his Batman costume and heads upstairs to Tim’s apartment but is ambushed by the present day Batman. The two fight very briefly before a small bomb bounces in through the open window and the apartment explodes.

This issue ends with Lois Lane now aboard a plane headed towards the coordinates of Cadmus Island…the last time she was here they could see nothing, however this time she takes a leap of faith and jumps out of the plane, preparing to parachute down to the island below.

Lois is pleasantly surprised at her pay off as she lands safely on Cadmus Island at the beginning of issue #28. She is, however, quickly accosted by an OMAC sentry and runs into the woods where she comes across her Earth 2 counterpart…the female Red Tornado.

Elsewhere in Las Vegas, Fifty Sue arrives and begins to berate King Faraday and Sgt. Rock over how Deathstroke could have sided with Brother Eye instead of herself. She eventually decides to help the team that Faraday has assembled to retake Cadmus.

Back in New York, the explosion in Tim’s apartment rages as the two Batmans fight against each other. Terry uses Bruce’s momentum in midair to throw him the window of a nearby building, and uses the lull to grab Plastique and fly away. Meanwhile, Cal has tracked down Ronnie Raymond to see if he knows where Madison has gone and Ronnie points him in the direction of Jason Rusch and Columbia University. Ronnie ends up tagging along as he wants to make sure Madison is okay and help if Cal needs it.

Our scene then cuts to Jason Rusch who has broken into Dr. Yamazake’s apartment in an attempt to talk about his anger towards the super heroes…Yamazake is nowhere to be found, but answers are uncovered in the form of a looping news broadcast of a building on fire in Tokyo…this broadcast was during the War and was where Yamazake’s wife died, he blames the Justice League for not saving his wife ore allowing them the technology necessary to do it themselves. The issue ends with Yamazake forcing a kidnapped Madison into his experimental teleportation chamber, explaining that Madison will pay for her father’s betrayal as he had conspired with the Apokolips demons during the War.

Our next issue opens with Cal Corcoran and Ronnie Raymond fighting against some security officers outside Columbia University. Ronnie quickly realizes who Cal really is and they agree to catch up after they rescue Madison. Meanwhile, Jason Rusch has also arrived at Yamazake’s lab and is attempting to stop what he is doing. Jason enters the lab and argues with Yamazake that the use of the transporter could kill Madison.

Outside at the lab entrance, Tim tells Ronnie to get inside and save Madison while he holds off the security guards. The true Red Robin re-emerges as Tim expertly stays standing and holds back the guards. Inside, Yamazake has knocked out Rusch and activates the teleporter. Everything seems to go wrong very quickly as Ronnie runs in and takes a massive energy spike to his chest…Jason and Ronnie realize that Firestorm is the only thing that can stop what is happening. But before the two can reconnect the lab explodes and a now transformed Madison flies away from Columbia as the new Firestorm.

This issue ends with Jason (inside Madison’s head) and Madison realizing that Ronnie died in the explosion in order to create this transformation, we then cut to the destroyed lab where Tim finds Ronnie in the rubble. The two briefly talk before Ronnie passes away.

Our last issue this month returns us to Cadmus Island where we last left Lois Lane and Red Tornado in the woods. Meanwhile, Green Arrow and his companions arrive on Cadmus Island and begin their assault. Several of the brainwashed Earth 2 heroes arrive and the group splits apart to accomplish their mission. Green Arrow, Red Arrow and Big Barda end up crossing paths with Deathstroke and company where Deathstroke is enraged that Ollie had faked his death…the two face off, but the matter is quickly ended when Fury steps out of the woods and severs Deathstroke’s head. The group continues on to one of the Cadmus buildings but are accosted by Power Girl.

The brainwashed Power Girl takes on Green Arrow and the other heroes as they attempt to activate a failsafe device which should destroy the island and Brother Eye with it. Power Girl reveals that she is the primary host of Eye and will not allow them to complete the plan…however a quick boxing glove arrow from Ollie triggers the switch. Barda grabs Power Girl and yells at the others to escape.

Meanwhile the island begins to rumble as everyone begins to make their escape to the boats. Lois bids goodbye to her doppelganger and flees along with the remaining heroes. From a distance they see Cadmus Island destroyed and discuss how Brother Eye should be destroyed along with it. The issue ends with an image of Red Tornado’s body in the ocean and a blinking red eye appearing on a cell phone.

I have to say that I am really enjoying this series; it covers a wide range of characters and expertly spins several story lines. I also enjoy that some issues will catch you up on everything that is going on (as shown in issues 27 and 28 this month) and then can have issues that focus on one major story (as seen in 29 and 30).

This month seemed to be packed with some awesome plot points as we saw the reconciliation of Ronnie Raymond and Jason Rusch before the former’s death as well as seeing the culmination of Green Arrow’s plan to assault Cadmus. And of course each had a conclusion that no one was expecting…Ronnie is now dead with Madison taking up the mantle as Firestorm and Brother Eye has managed to survive his destruction by piggybacking on someone’s cell phone.

My only complaint, and it is minor, is I am not 100% certain how Terry is going to stop this alternate future from happening…I get that he has to somehow stop Brother Eye from taking over, but it seems he’s too preoccupied with breaking into Terrifitech. Hopefully this will get resolved by the end of the series. Additionally I’m not sure how some of the storylines will end up coming together in the end…but I’m sure the writers have something planned that will smooth everything out.

It’s also nice to see that DC is utilizing story lines from Futures End month as we see references to the Green Arrow issue as well the appearance of Batman is shown. Definitely a much better job at connecting the stories this year then the failed attempt at Villains Month.

Overall this series is being expertly written and beautifully drawn each month…however I wouldn’t jump on this bandwagon if you haven’t been keeping up, this story is very intricate and is not something you can pick up halfway through.