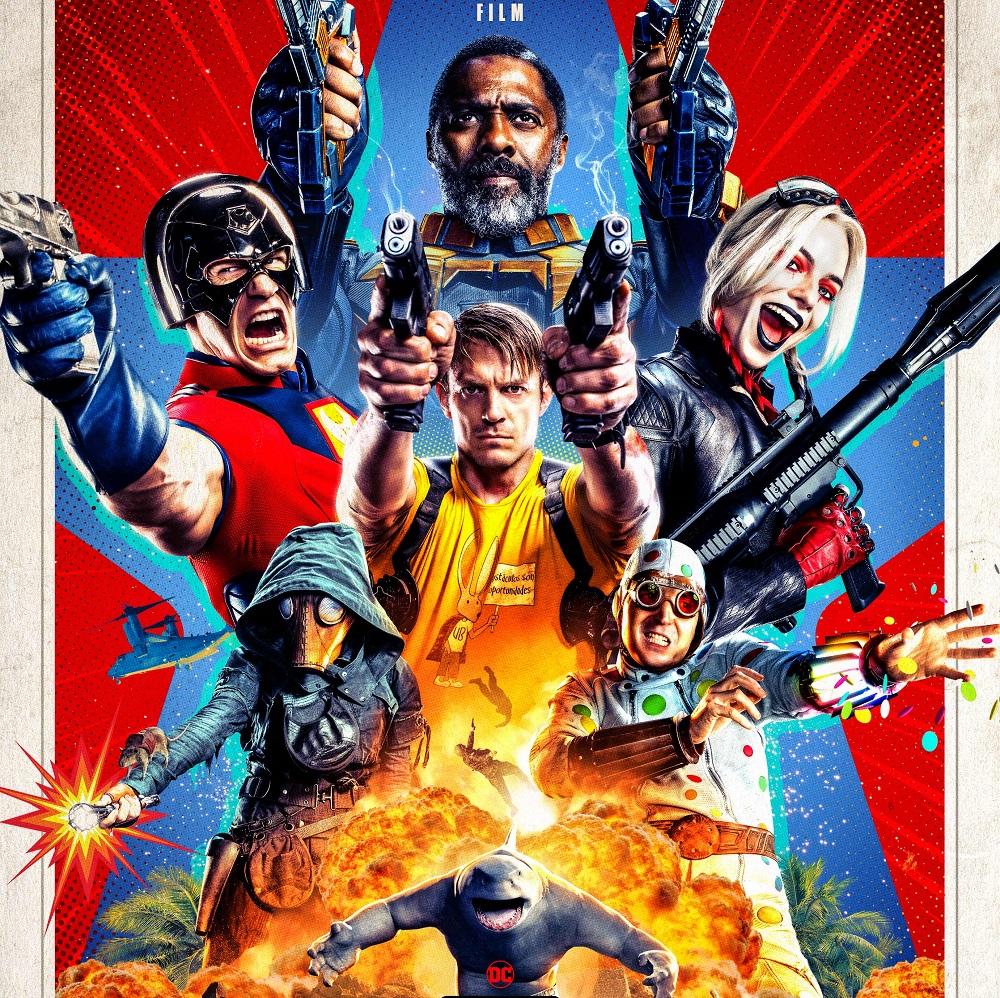 Overview: James Gunn makes the move from Marvel to DC as he directs The Suicide Squad, the soft sequel (reboot?) that sees Amanda Waller’s Task Force X led by Bloodsport and Rick Flag into Corto Maltese on a dangerous mission.

Synopsis (spoilers ahead): Amanda Waller recruits Savant to join her black ops team along with Harley Quinn, T.D.K., Captain Boomerang, Javelin, Mongal, Blackguard, and Weasel to invade the island of Corto Maltese to take out a laboratory called Jotunheim that holds a secret experiment called Project: Starfish. That team, led by Rick Flag, is completely taken out and killed by enemy soldiers except for Flag and Harley. While that team is fighting, Waller sends a second, secret team to the other side of the island which consists of Bloodsport, Peacemaker, King Shark, Ratcatcher II, and Polka- Dot Man.

Their original task was to capture the Thinker, who is a scientist in charge of Project: Starfish but first Waller commands them to save Flag first. They save Flag after killing all the rebel soldiers that had actually saved Flag and not kidnapped him.

While the Squad is doing that, Harley finds herself kidnapped by the Corto Maltese military. At first, the president of the small island wanted to marry her but Harley killed him after he had “too many red flags”. Harley is then kidnapped and tortured by the military. Harley frees herself before the Squad can save her. They then finally kidnapped Thinker and went to make their move to destroy Jotunheim.

While the rest of the team attach bombs throughout the building, Flag and Ratcatcher head underground with Thinker where they discover Project: Starfish to be Starro the Conqueror. Starro is an alien who can control people’s minds. Thinker reveals to Flag that Starro is only here because of the American government. Sick of being a puppet by the US government, Flag plans to take the hard drive and expose the US government. Peacemaker comes down and reveals that Waller gave him the order to destroy that drive to avoid the secret getting out.

The team regroups down below and sees Starro fully emerge and take over many citizens in the area. Waller tells them that their mission is accomplished and they can go home but Task Force X decides to help and try to stop Starro. Waller tries to activate the bombs in their neck but her team in the headquarters knocks her out and that allows Bloodsport and the team the opportunity to stop Starro. Polka-Dot Man dies after finally becoming the superhero his mother thought he could be when she gave him powers in the first place. The team stops Starro after Ratcatcher commands all the rats in the area to chew Starro to death from the inside.

Bloodsport saves the footage and tells Waller that he will release the tape if she ever decides to come after them again. She agrees and Task Force X is free.

In the post-credits scene, we see that Peacemaker is alive and under the care of the government.

Analysis: Wow! The Suicide Squad was a fun, wacky, action-filled comic book movie. This movie was quintessential James Gunn. You could really see that WB really let James Gunn have full control of the creative direction of the movie. Gunn had free reign and that is something that he might not fully have when he directs Guardians of the Galaxy at Marvel (which isn’t a knock on how Marvel makes movies).

Idris Elba was awesome as Bloodsport. His character will be compared to Will Smith’s Deadshot from the first movie because they are basically the same character with the same character arc. Elba just had more to do than Smith. His character seemed more important to the story and had more fun than Deadshot. We got more of a sense of how great Bloodsport is with weapons and how he can create weapons out of his costume. We never got to see Deadshot’s great trickshot ability but I am glad to see how great Bloodsport is with guns.

Margot Robbie is great again as Harley. In my opinion, she hasn’t had a bad performance in the role and The Suicide Squad might be her best one yet. Daniela Melchior plays Ratcatcher II and James Gunn described her as “the heart of the film”. I wasn’t familiar with the actress but she gave a great performance. I wouldn’t be surprised if we see her pop up again in the future. Sylvester Stallone stole some scenes with his work as the voice of King Shark.

David Dastmalchian continued his tour through the DC Universe. Once he was the paranoid schizophrenic in The Dark Knight, earlier this year he was Calendar Man in The Long Halloween adaptation, and now he’s Polka-Dot Man. He was fun in the role and we got a bit of his backstory and how he hates his mother and how his powers are a disease. He and James Gunn made Polka-Dot Man interesting which is no small feat.

John Cena played Peacemaker in his biggest movie role to date. He played the character as sort of an off-brand Captain America where he preaches that he will kill anyone that gets in his way to bring peace. Cena is slated to star in a Peacemaker series coming to HBO Max series set to air in early 2022. I enjoyed Cena’s chemistry with Idris Elba and the rivalry that their two characters shared.

On the list of the DCEU films that have come out since Man Of Steel, this movie sits at the top half. It was a fun comic book movie that really leaned into the tone of the source material along with James Gunn’s own brand of humor. A difference between this movie and the David Ayer film was that you felt at any moment the characters could die. This movie also gave each character their own moment to shine and help out the team. Depending on how the rest of 2021 plays out for DC and Warner Bros but this has a chance to be one of their top films for the year.