The Watchmen Watch: A Study in Scarlet and Blue 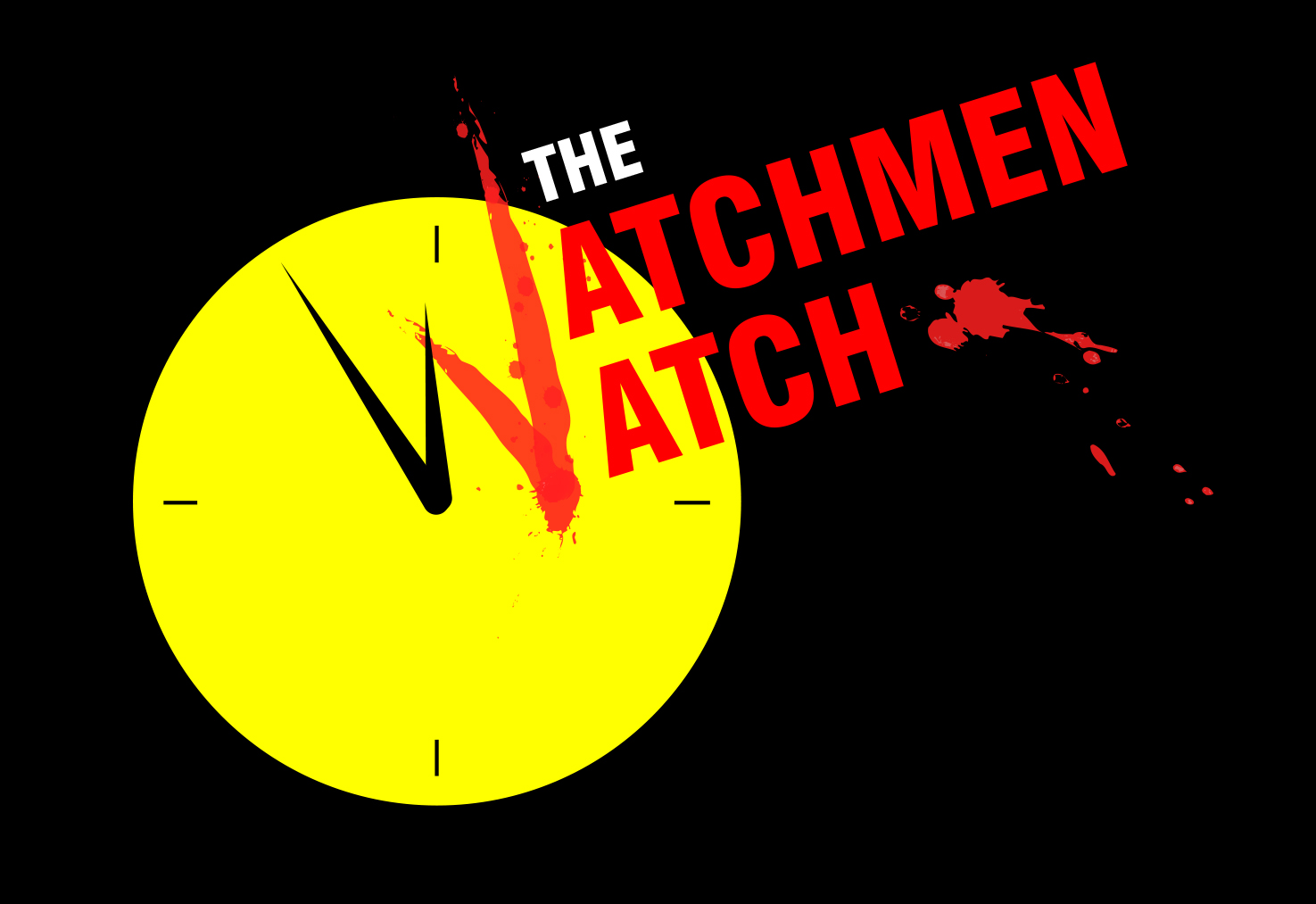 Last week, The Flash #22 came out, bringing more questions than answers as to what has happened to the DC Universe timeline. But what is to come we do know, and it is the Doomsday Clock. Written by Geoff Johns with art by Gary Frank, the same team behind Batman: Earth One, this will be the event that will finally tie the Watchmen mystery together with DC. In an interview with Blastr, Johns has clarified some details on what to expect. It is safe to say that this standalone story will be focused on a confrontation between the optimism of Superman and the utter indifference of Dr. Manhattan.

To better understand Dr. Manhattan’s view of the world check the previous installment of The Watchmen Watch: A Study in Scarlet and Yellow, in which we investigate The Watchmen in its entirety. As for the Doomsday Clock, we will be delving into it in the next installment, together with a deeper analysis of The Button now that it has concluded.

For this second part, we are going to be following Dr. Manhattan’s and Superman’s storylines to examine some of the mysteries of Rebirth. Yes, Dr. Manhattan has been running around DC since the New 52, and I don’t mean his giant blue hand, I mean CAPTAIN ATOM. Alan Moore originally conceived The Watchmen using the Charlton Comics heroes. DC had recently bought the rights to publish them, integrating them into the regular continuity during Crisis on Infinite Earths (1985-1986). The Watchmen came after this, running from 1986 to 1987, but DC ended up not allowing Moore to use the characters for fear of making them “unusable” after the series. Thus Blue Beetle became Nite Owl, Nightshade became the Silk Spectre, The Question became Rorschach, the Peacemaker became the Comedian, Peter Cannon became Ozymandias and, most importantly, Captain Atom became Dr. Manhattan.

To follow Captain Atom’s storyline we will be starting with his not-death in the New 52. It all starts with THE FURY OF FIRESTORM #15 (New 52). In this issue, Captain Atom (Nathaniel Adam) returns from his exile on the moon to try to stop Dr. Megala, who has possessed the body of Firestorm. By the end of the issue, Captain Atom collides with the body of Firestorm, and the energy generated by the collision disintegrates his body and part of him travels in time to the 31st century. The 31st century is the time of the Legion of Superheroes, one of the pieces of the DC Rebirth puzzle. There, he takes the name of Nathaniel Adym and works with the Legion in the title LEGION LOST. By the end of the final issue, LEGION LOST #16 (2013), they are no longer in the 31st century. In order to save the Legion, Nathaniel tries to move forward in time. Unable to go forward due to a temporal anomaly, he decides to go back in time, hoping that his knowledge of the future will allow him to help his team.

He remains MIA until the current mini-series THE FALL AND RISE OF CAPTAIN ATOM, which holds a lot of references to Watchmen and Dr. Manhattan. The story starts in December 2012. Captain Atom is sick, making him release great amounts of energy at irregular intervals. What he tells Dr. Megala as he realizes that he might be getting closer to dying is almost an answer to what Doc. Manhattan says at the end of The Watchmen. In the same issue, there is also a reference to the Manhattan Project, the first nuclear program to create an atomic bomb, but also the name of another blue all-powerful being. One of the energy blasts hurls Captain Atom back to 1994. He emerges with no powers, in a world with no superheroes. Worried about changing the future, Nathaniel pretends to be a fiction writer and consults with a university professor for information on theories of time-travelling. The most important bit here is that “the universe is self-regulating, it will neutralize any action in the past that might cause a future time-paradox.”

Six years go by and Nathaniel builds himself a new life. It is the year of 2000 and an incident gives him back his powers back. The time-stream then pulls him, hurling him forward to 2017. This time-frame skip – 2012 to 2017 – means that he would not be present during most of the New 52. Back in the present, Captain Atom’s color changes from blue to red. He then finds out that a convict that was on the electric chair at the exact moment he got sent back in time got frozen in a quantum time bubble. When he tries to release him, the convict emerges as a second, blue “Captain Atom” calling himself Ultramax.

The play with blue and red energy is a theme that ties the current Captain Atom storyline to what has been happening in the Superman titles. The way that the energies are being used though is opposite: while one title has them as enemies, the other has shown the energies merging to form what is the new Superman, a combination of the Pre-Flashpoint and New-52 versions.

The clue left in Superman is that the red energy represents the New 52 while the blue energy represents Pre-Flashpoint continuity. Mr. Oz refers to the merge as a repair to what is broken, meaning the DC timeline.

The mysterious figure of Mr. Oz has been a constant in Rebirth, but he first appeared back in Superman #39 (New 52). In his first appearance, Mr. Oz has a package delivered to Clark Kent, a blank journal.

A journal sent to a reporter is not gratuitous as it also happens in Watchmen. Before heading off to face Ozymandias, Rorschach sends his journal to a newspaper by mail, in a scene very similar to the one played in Superman #39. A journal has again appeared in the Superman Reborn storyline, being the object Mister Mxyzptlk uses to bring Jon into the fifth dimension.

Mr. Oz seems to be currently putting together a collection of people from the DC universe for purposes unknown. One of the theories running around is that he might be Ozymandias. Upon further investigation, though, there is a character connected to Ozymandias who doesn’t appear in The Watchmen that is more likely Mr. Oz. He lays hidden in Peter Cannon Thunderbolt.

Before DC bought the rights to publish Charlton Comics, Thunderbolt – the character who turned into Ozymandias – had a recurring villain: The Hooded One. He is not a character easy to come across and the pages we found containing him came from one source alone: the blog The Bronze Age of Comics.

From what we could find about the character on Writeups.org, The Hooded One is a disfigured man who used to be the Chosen One of a monastery. Peter Cannon was made the Chosen One in his stead to honor Peter’s parents. Angered, the Hooded One uses the knowledge he acquired from studying the scrolls in the monastery to confront Peter Cannon, going as far as creating an alternative world inside a cave.

Not only are the characters drawn in the exact same way, but when Mr. Mxyzptlk runs away from Mr. Oz he calls him the hooded monk.

Talking about the Charlton Comics characters, another one who has popped up after Rebirth is Ted Kord. Ted had been absent from regular continuity since his death in 2005 during the Countdown to Infinite Crisis. Not only that, but he is playing mentor to Jaime Reyes, who is now wearing the original Blue Beetle suit. Right now, what we know for certain is that, when everything plays out, there will be some involvement from Dr. Manhattan and Superman. Every clue left behind by DC, however, seem to point toward an involvement of the original Charlton characters. Those are characters who got integrated to DC continuity during one of the Multiverse multiple crises. The concept of multiple Earths is slowly being brought back and one cannot help but associate this with Grant Morrison’s Multiversity. In it, there is a tale titled Pax Americana revolving around the Charlton characters, but they are portrayed as if they were merged with their Watchmen versions. Considering we had Superman merging his New-52 and “blue” versions, it would be fair to speculate that, by the end of the Doomsday Clock, the Charlton characters may be merging with their Watchmen counterparts, generating something like the way they were portrayed in Pax Americana.