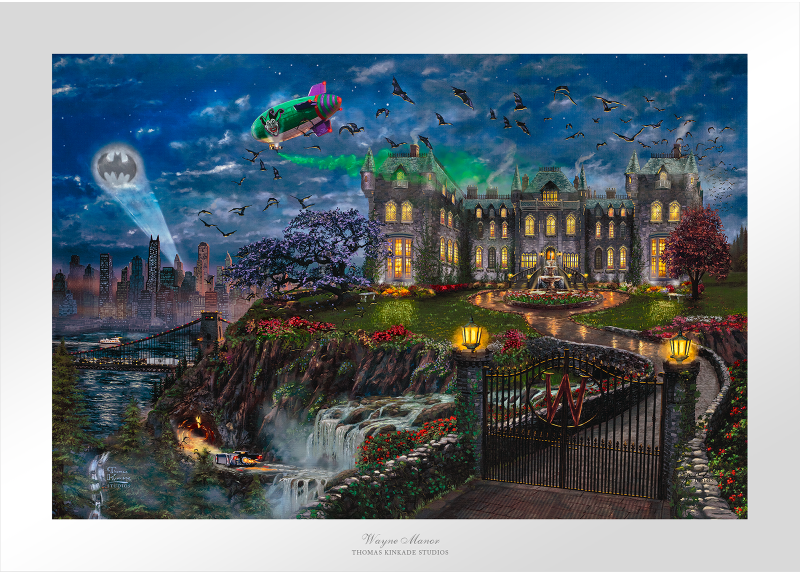 The latest fine art print offered from Sideshow Collectibles is a new print from Thomas Kinkade Studios featuring Wayne Manor. There have been some other offerings from the Thomas Kinkade Studios last year, but this one features a variety of subtle nods to the Batman Universe. The print is available unframed in either a twelve-inch by eighteen-inch or an eighteen-inch by twenty-seven-inch paper print, with both featuring high-quality pigment inks that outlast normal print inks. The smaller-sized print is priced at $190, and the larger one is priced at $245. Both versions of the print are expected to ship between September and November 2022. You can preorder the print at Sideshow Collectibles.

Located just outside of Gotham City™, Wayne Manor is an epic part of the DC™ Universe as the residence of billionaire Bruce Wayne™ and his ward, Dick Grayson, and The Dark Knight’s hidden headquarters. A secret panel in the Wayne Family Estate leads to the state-of-the-art cave where Bruce and Dick’s superhero identities, Batman™ and Robin, carry out their mission to protect the citizens of Gotham City.

Thomas Kinkade Studios’ latest piece captures the excitement of the moment when the Batmobile™ emerges from the secret entrance below the manor, responding to the Bat-Signal™. Which arch-nemesis is causing Commissioner Gordon to signal for the Dynamic Duo’s assistance? Can Batman and Robin expect to encounter The Joker™, or maybe Ra’s al Ghul?

Batman fans, be sure to add Wayne Manor to your DC Comics art print collection today!