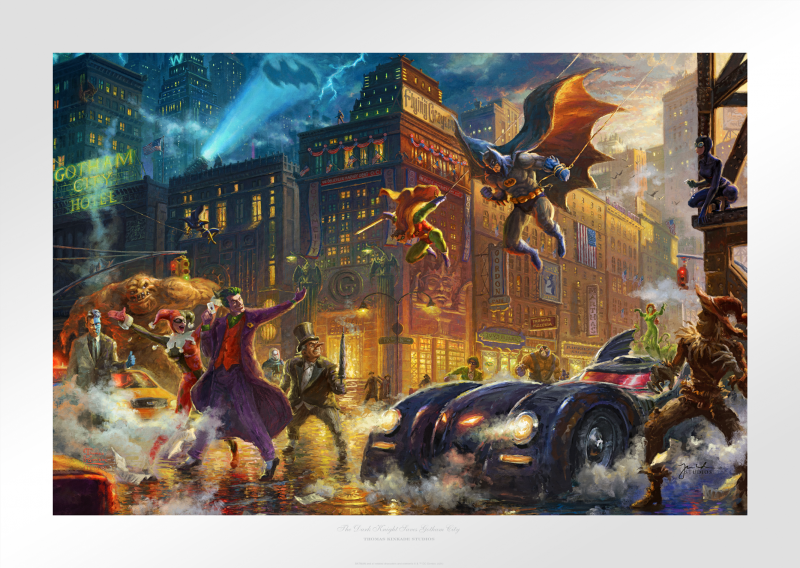 Sideshow has announced the availability of two new prints featuring the Batman Universe created by Thomas Kinkade Studios. The first print, “The Dark Knight Saves Gotham City”, features Batman and Robin swinging into action in Gotham City to face off against a number of villains including Joker, Penguin, Scarecrow, and more. The second print, “The Justice League”, features the league lineup in the Secret Sanctuary. Each print is available unframed in either a twelve-inch by eighteen-inch or an eighteen-inch by twenty-seven-inch paper print and both feature high-quality pigment inks that outlast normal print inks. The smaller-sized print is priced at $175 and the larger one is priced at $230. All versions of both prints are expected to ship between May and June 2021. You can preorder the prints at Sideshow Collectibles by clicking the links above.

SUMMONED TO GOTHAM CITY BY THE BAT-SIGNAL, THE CAPED CRUSADER AND HIS SIDEKICK ROBIN FACE A FORMIDABLE CHALLENGE AS THEIR MOST EVIL NEMESES HAVE JOINED FORCES.

Led by The Joker, the worst villains from Gotham City have escaped Arkham Asylum, bringing mayhem, violence, and destruction to the streets. Only one person can stop these criminal monsters – the Dark Knight. In The Dark Knight Saves Gotham City, the true strength of Batman’s power is made manifest.

The Joker, Harley Quinn, The Penguin, Mr. Freeze, Two-Face, Poison Ivy, Scarecrow, and their band of evil masterminds are stopped dead in their tracks as the heroes arrive. As lightning races across the city skies, the Dark Knight and his companion prepare to fight an epic battle to save the citizens of Gotham City – a battle that the world’s most power crime fighters will undoubtedly win. 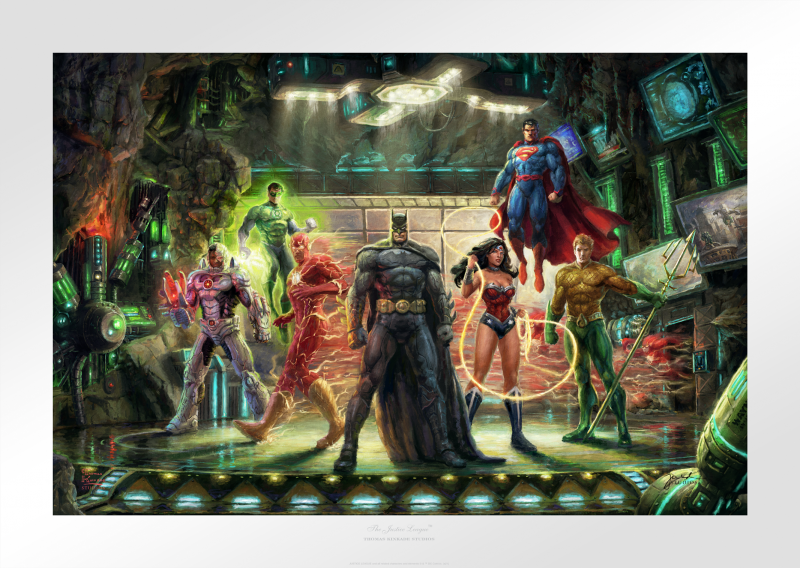 For decades, DC fans have been kept on the edge of their seats with the heroic tales of this high-flying action-packed ensemble. Now the entire team, in all their glory, is depicted in an electrifying painting by Thomas Kinkade Studios – The Justice League. This scene is set inside their legendary Secret Sanctuary. Here they prepare, standing poised and ready to protect the world from anything and anyone that threatens its safety.