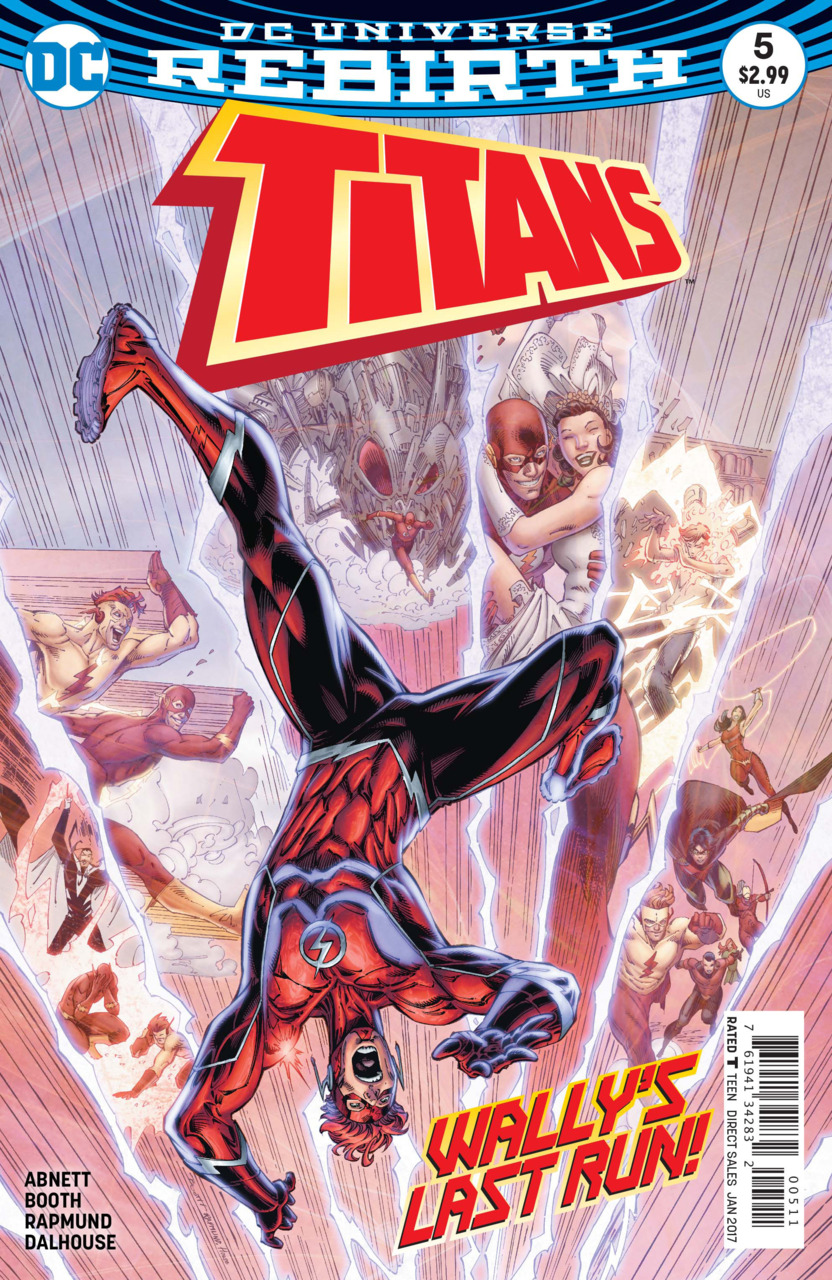 “The Return of Wally West Part Five: Run For Their Lives” begins where the previous issue ended. Wally is preparing to run thousands of miles as fast as he can to save the lives of both his team-mates and Linda who find themselves in death traps across the United States. Wally’s first target is the puppet Robin who is holding a batarang to Roy’s throat. Wally grabs Robin and plows him face first into the “you are leaving Keystone City sign. He now works to prioritize where he will go first. Donna and Nightwing are getting their minds fried by the fake Lilith in Coast City. In Gotham, Linda is hanging over a burning cauldron while the rope she is suspended from is being burned through. The fake Speedy’s arrows are in flight about three hundred feet per second at the captive Tempest and Omen. He has no clue how long it will take Lilith to cook Nightwing and Donna’s minds. He races to Coast City in California faster than the speed of light.

While Wally runs, we see Kadabra who by enchanting time and light magically taunts Wally as he runs. He also magically films Wally while he is on his current mission transmitting his failure for all the world to see. Wally works to ignore him while Kadabra recounts how he make Kid Flash disappear into the time stream causing the world to forget him but also causing Kadabra himself to forget himself as well. Now the world will fear him because it is watching Abra Kadabra destroy Wally West. Wally continues to work to ignore Kadabra while he runs.

In Coast City, Wally takes out the fake Aqualad and Lilith leaving a confused Donna to free a confused Nightwing. The arrows continue to fly and the strands of rope continues to burn. Wally continues to tap into the speed force like never before. As he runs he remembers that this could be his end, the speed force could reclaim him as he runs too fast. He knows that in this reality Linda does not love him so his anchor here does not exist but that does not matter, he has to save his love and friends.

In Metropolis, Wally arrives to snatch the arrows before they enter the captive Tempest and Omen. He quickly frees them and chains up the face Speedy and Donna and then races off to Gotham to rescue Linda.

The rope breaks and Linda starts to fall into the fire but instead she falls into the arms of Wally as he catches her before she hits the fire. He unites her and Linda finally realizes what happened. She sees Wally as he starts to fade into the speed force. He tells her that he had to do it to save her and as she reaches for Wally’s hand, he disappears and Kadabra appears to see the end of Wally West. Next issue Lost to Infinity.

This issue has one goal. To show the rescue of the Titans and Linda. We get a rehash of Kadabra and why he hates Wally so much probably for readers who have missed the prior issues. We do get to see the speed of Wally and this issue has way more Wally West than any one member of The Batman Universe.

Overall this was a good issue for showcasing the power of Wally Westm and seeing him fade back into the speed force is a great cliffhanger.