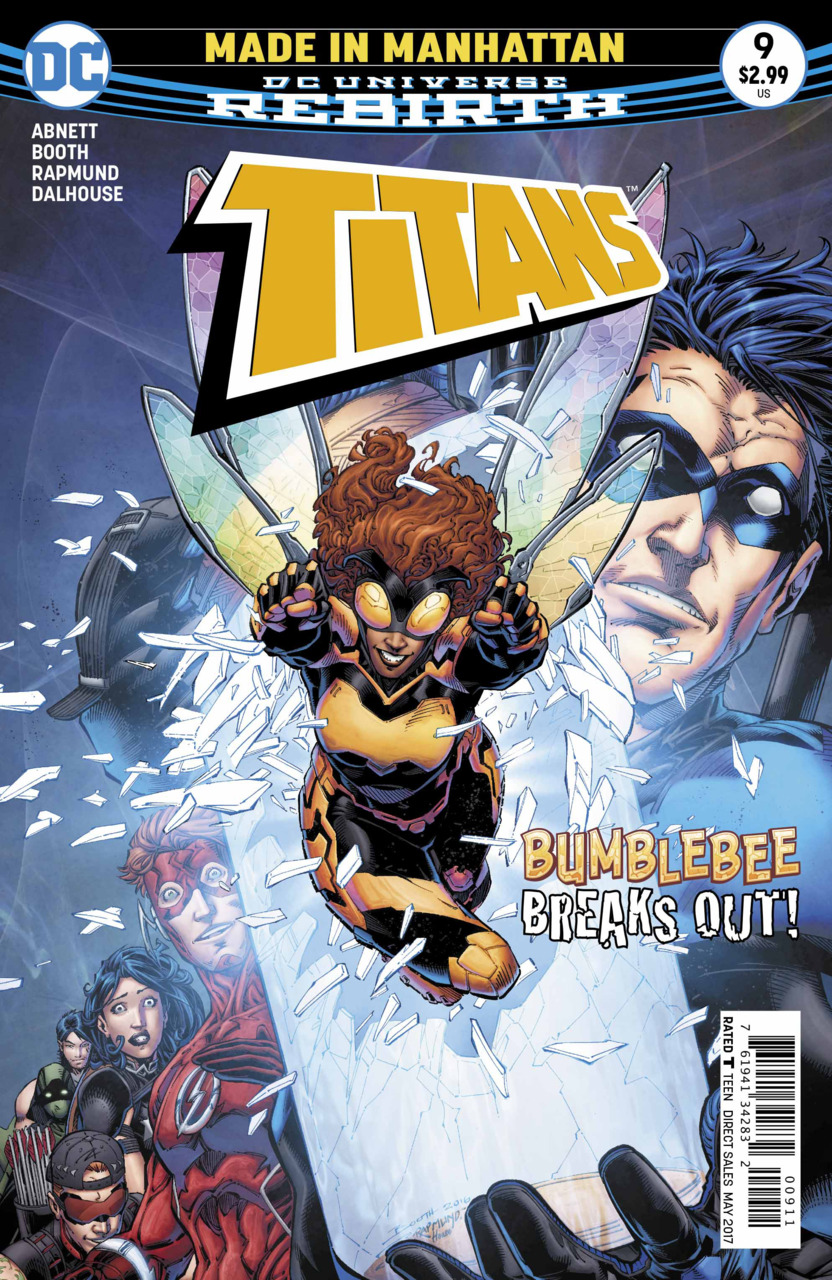 Titans continues to be one of the most solid books DC has been putting out throughout the Rebirth rebranding.  Consistently, the team has been delivering a fun, approachable book that makes use of the long standing history of the characters while not suffering from the weight of the continuity.  In this month’s issue, “Made in Manhattan” continues its look into the super-power research company Meta Solutions, with the shocking reveal of its apparent employees, the Fearsome Five.

The confrontation kicks right off with a tense standoff between the reformed Titans and the Fearsome Five as Nightwing tries to sort out exactly what is going on.  Psimon quickly reveals that the majority of the Fearsome Five have taken the same cure that Mal Duncan had previously and the others, himself included, are reformed.  He maintains they present no threat to anyone, and are honestly just looking to help others from making the same mistakes they have.  Omen is able to use his psychic abilities to confirm these thoughts, but Karen Duncan is understandably upset as Mammoth, the man who caused a great deal of physical and mental anguish to Mal during “Titans:  Hunt” is part of the Meta group.  Regrouping back at Titan Tower, the team, along with Mal and Karen, weigh their feelings on whether or not to believe everything they have been told.  Mal also confides in Karen that he doesn’t care if Mammoth is involved – if they are helping her, he supports it.  At the same time, Roy Harper/Arsenal gives his speech on the nature of being reformed.  He himself has had his demons in the past.  While he fully supports the Five’s attempts to reform, he fully acknowledges that it seems to have been for too quick of a turnaround and that something could very well be up.

With their course of action decided, Flash and Nightwing head back to the facility for some after-hours recon.  After easily gaining access, they find themselves without communications but push forward.  Computer files reveal that Meta Solutions may be responsible for giving powers to the man the team took down back in issue #7.  Looking deeper into the facility for evidence, they come across an angry, but still very much powered, Mammoth.  Cue the fight music.  Back at the Tower the team decides that without communications the best bet is to head in, just in case.  Karen takes the initiative to head in as well, in her Bumblebee suit, since she feels responsible for putting the team in harm’s way.  At the same time, Psimon assures the mysterious benefactors of Meta Solutions that the Titans will no longer be a concern very, very soon.  And that Karen is instrumental to their plans.

Comic book joy.  That’s what’s on every page of this book.  I’ve long been a fan of Abnett, but his work on Titans has been a high point of a storied career.  The mystery behind what exactly Meta Solutions does is slowly deepening.  The reveals are paced out enough to keep the reader interested without giving away the story too early.  The balance is just about perfect.  Abnett gives new life to former second-string characters the Fearsome Five and legitimately presents them as a possible threat to the Titans.  There are sure to be some surprises along the way, but the basics of this story arc have been presented cleanly and a great setup has been accomplished.  I’d like to see much more of Wally West in these pages, but I’m sure that time will come.  If his overall Rebirth story has to take a backseat for a while, I’m happy Abnett is in the driver’s seat.  Brett Booth continues to impress as well.  His art is dynamic and as fast-paced as the characters.  When teamed with Norm Rapmund’s inks and Andrew Dalhouse’s colors, we get a light, fun visual story that brings the reader in.  One of the common pitfalls of team books is the tendency for the characters to lose their individuality.  With so many characters getting so much screen time, it’s impressive that the pages are as clear and concise as they are.

As things continue to heat up for the Titans, I’m looking forward to seeing what this book brings.  The team has been consistent and given us a book that continually outdoes itself.  I’m hoping they can keep this pace up and keep the group together for some time to come.