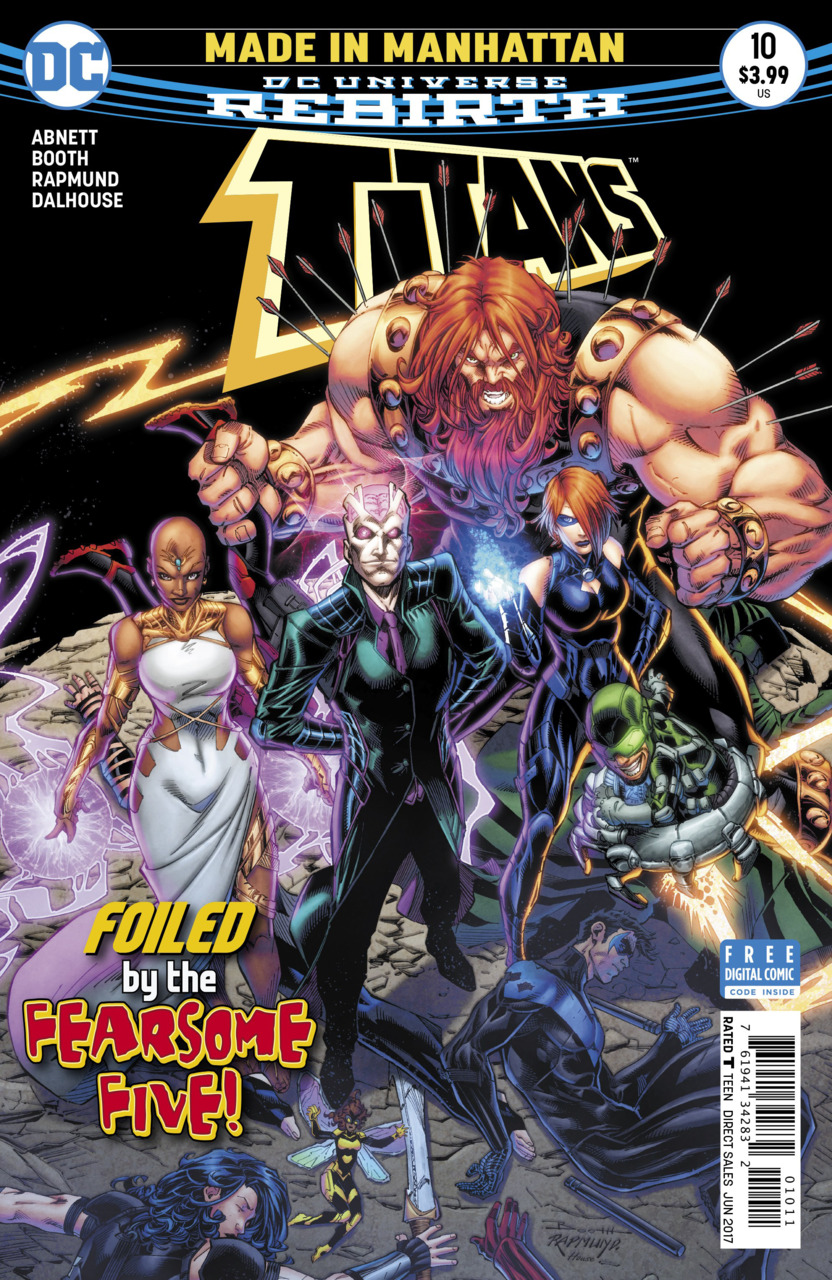 The Titans were misled to the borough of Manhattan after Omen gleaned the word from the mind of Abra Kadabra.  While it remains to be seen whether or not Kadabra was referring to Doctor Manhattan of Watchmen (and DC Rebirth) fame, the team has certainly found adventure in that location.  The closure of the “Made in Manhattan” arc picks up with Nightwing and Flash held captive by the still-powered Fearsome Five at Meta Solutions.  The plan, of course, is it extract their abilities and powers and sell them, especially mining Flash’s connection to the Speed Force.  Psimon is predicting a hefty payday for the crew.  Before they can spend the money, however, the rest of the Titans show up and surprise them, thanks to Omen’s ability to counteract Psimon’s psychic patrols.

The pace of the fight is quick as the team is quickly taken apart with Jinx using Donna Troy to take out Arsenal, Shimmer fusing Donna Troy into the ground, Mammoth overpowering Tempest, and Psimon shutting down Omen.  The Five are coordinated and ruthless in their attack.  However, they still have one problem left to deal with – Karen has arrived in full Bumblebee mode.  Her surprise appearance wasn’t planned and has caught the Fearsome Five off guard.  She works her way through them taking them out of the picture with her sting and creatively using her size manipulation powers.  When she comes face to face with Psimon, however, he quickly psychically gains the upper hand and launches a violent attack, meaning to destroy her mind.  Omen, however, has regained her strength enough to knock out Psimon with a well-planned strike while he was focused on the psychic attacks.  Bumblebee saved the day.  Only, when her husband Mal shows up in a hodge-podge costume put together from Nightwing’s armory she does not recognize him.

As the story arc winds down, Omen reveals that Psimon’s attack on Karen has left her without a great deal of her personal memories due to a chunk of her identity he ripped from her mind.  It could well be out there somewhere, but they don’t know where.  Meanwhile, the freshly rescued Nightwing and Flash go over data they were able to take from the Meta Solutions computer system and identify one of the main benefactors as notorious terrorist organization H.I.V.E.  We close on Deathstroke watching the team from some distance, leading us directly into the crossover story “The Lazarus Contract.”

The crew has done another bang-up job on Titans.  Abnett’s wordplay continues to strike a balance between serious and campy and Booth and the art team have handled an action-packed issue with grace.  At this point in the publication of this book, the team has seemingly settled into a groove and the degree to which they work together is impressive.  It feels like they have been together much longer than they have been.  Both Abnett and Booth are long-serving members of DC’s creative team and it’s great that they’ve found a home together with the Titans.  I look forward to many, many issues to come.

For this review, however, I have to call out Brett Booth on pencils for his excellence.  Art is an extremely important aspect of comics, but speaking as someone with little to no artistic talent, it’s not what draws me to books.  I’m into the writing.  The stories.  With that lean in my interests, I’ve often not been drawn in to “fight issues” where the action takes center stage.  They are fun, but the focus on the artistic storytelling has always stymied my analysis of the book.  As I’ve been writing more and more in recent years I’ve gotten better at picking up on specifics of the artistic aspect of storytelling and how the feel of the book is influenced.  I feel like Titans has been one of the first books that’s really clicked on all levels for me.  Mikel Janin’s work on Batman is gorgeous, and I appreciate it a great deal, but it doesn’t evoke the same emotional response as Booth’s work on Titans has.  This is a heartfelt thank you to Dan, Brett, Norm, and Andrew.  Titans makes me feel like a kid again in the greatest way.