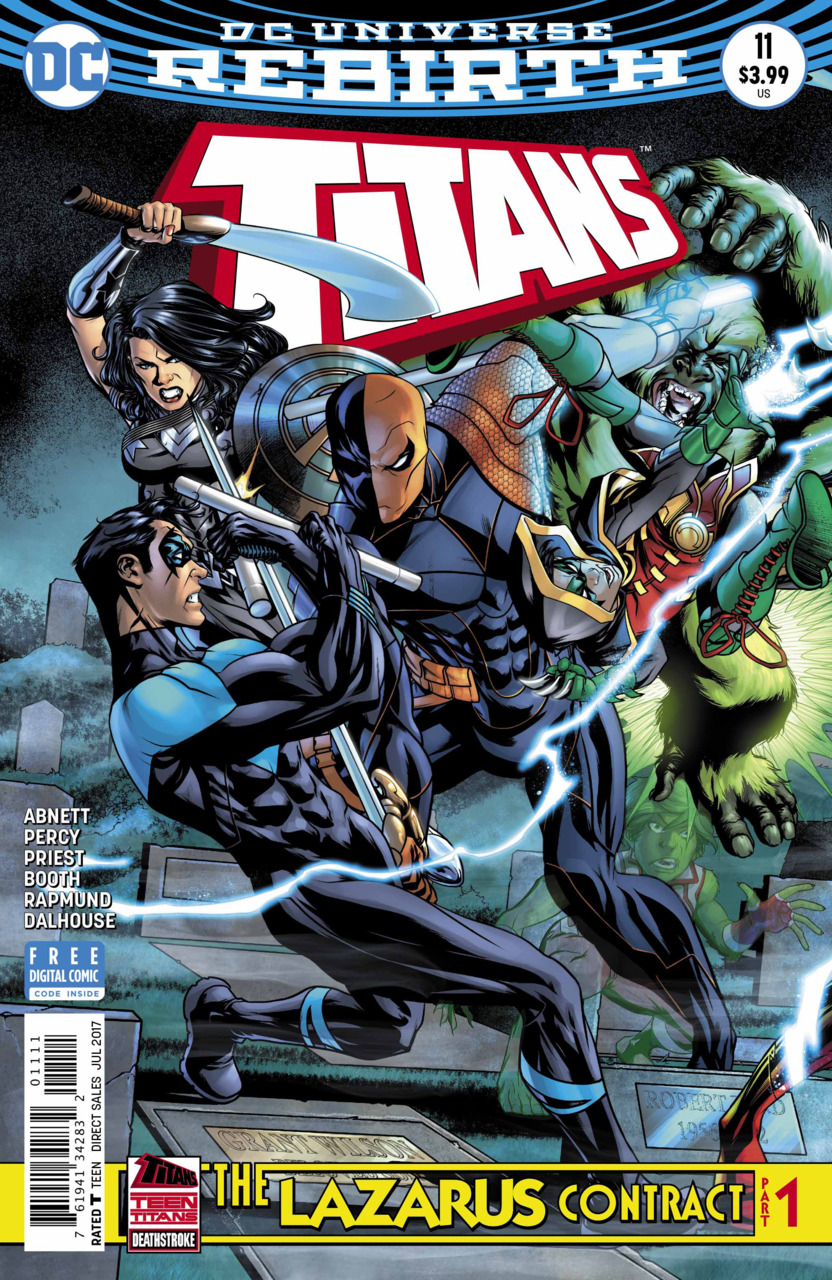 (Spoilers ahead) The first part of the Lazarus Contract, the crossover spanning Titans, Teen Titans, and Deathstroke begins with issue 11 of Titans.

The issue begins years ago at Hutton Corners. The Teen Titans are getting decimated by the Ravager. Kid Flash and Aqualad are both down and Ravager is holding Robin down by his throat. Speedy attempts to shoot Ravager but the villain is able to catch the arrow in mid flight. Suddenly Ravager lurches off of Robin and Lilith feels that Ravager’s heart is burning up. Wally races to the fallen Ravager and starts compressions as Deathstroke arrives calling for his son Grant, Ravager. Deathstroke cradles his son who dies in his arms. Slade picks up his son and vows revenge on the Teen Titans for the death of his son.

We fast forward to three days ago. Slade is recovering from a cornea transplant operation to restore his sight. Slade starts to get dressed ordering Wintergreen to ready the jet for he is headed for New York. Wintergreen reports that Rose is in stable condition and Joseph is in rehab. Wintergreen mentions Grant saying that Slade kept calling Grant’s name and the New Flash in his delirium. Slade repeats his order to get the jet ready.

One hour ago, the Titans are fighting a a group they originally believed are from H.I.V.E.. Lilith is able to discover that these guys are not from H.I.V.E.. The Titans are attempting to find H.I.V.E. in order to get Karen’s memory back. Nightwing grabs one of the guys and asks him who are this force they are fighting. The guy just says that they were hired by someone named Lazarus. This surprises Dick who lets the guy go. Lilith is able to sense that the guy was telling the whole truth but she does not know what Lazarus means. Dick forcibly says that he does not know. Lilith suddenly realizes that Wally is missing.

In present time, a confused Wally finds himself manacled to a treadmill that is making him run by giving him electric shocks when he tries to slow down. Wally hears a familiar voice that asks him about the Titans. He has been injected with a verbal laxative that is making him answer the questions. Wally recounts how he was thrown into the time stream and escaped when the Flash pulled him back. Someone has changed the world and Wally does not know who. The treadmill halts and an exhausted Wally recognizes Slade Wilson, Deathstroke. Deathstroke tells Wally that he was there when the Teen Titans killed Grant. Wally insists that Grant’s heart gave out and he tried to save him but he was not fast enough.

In Manhattan at Titans Tower, the rest of the Titans frantically search for their missing comrade. Tempest suggests that Wally just ran off or he fell back into the time stream again, The others do not want to hear it. Lilith pulls Dick aside and asks him about Lazarus. Dick insists that he does not know and accuses her of trying to read him. Dick is one of the hardest minds to read because he can close it. Dick insists that he is not withholding any information and the words mean nothing to him. Donna interrupts and asks if they should contact the Justice League and Lilith realizes that Dick is lying to her.

We find Wally strapped to another contraption. Slade asks Wally about the Flashes ability to travel and bend time. Wally says that theoretically they could, but they do not. Wally realizes what Slade is doing to him. Wally is forced to vibrate while Wally protests. Wally breaks free and attacks Slade. Slade tells Wally that he has a deal for him. Slade says that if Wally helps him bring Grant back, he will stop being Deathstroke. Wally refuses and Slade says that he has secured a contingency. The last reveal is that Slade has captured the new Kid Flash who is a member of Damian’s Teen Titans. The next part will be found in Teen Titans #8.

I believed that this was a slow issue. It primarily consists of three major scenes with a a couple of minor scenes. The first scene is the death of Grant Wilson. The second is the battle that leads to Wally’s abduction. The last is in Slade’s hideout.

The action was light, but the implications here are pretty huge. Lilith is able to discover that Dick is lying to her and the second reveal of the two Wally West’s meeting each other.

The art here is the usual art for this series showing the characters with a lot of facial expressions. I particularly like how the Brett Booth draws Dick Grayson. You can see by the art that he is hiding something, we and the Titans just do not know what.

Overall, it was an interesting issue, but I did find it a little slow for my taste.