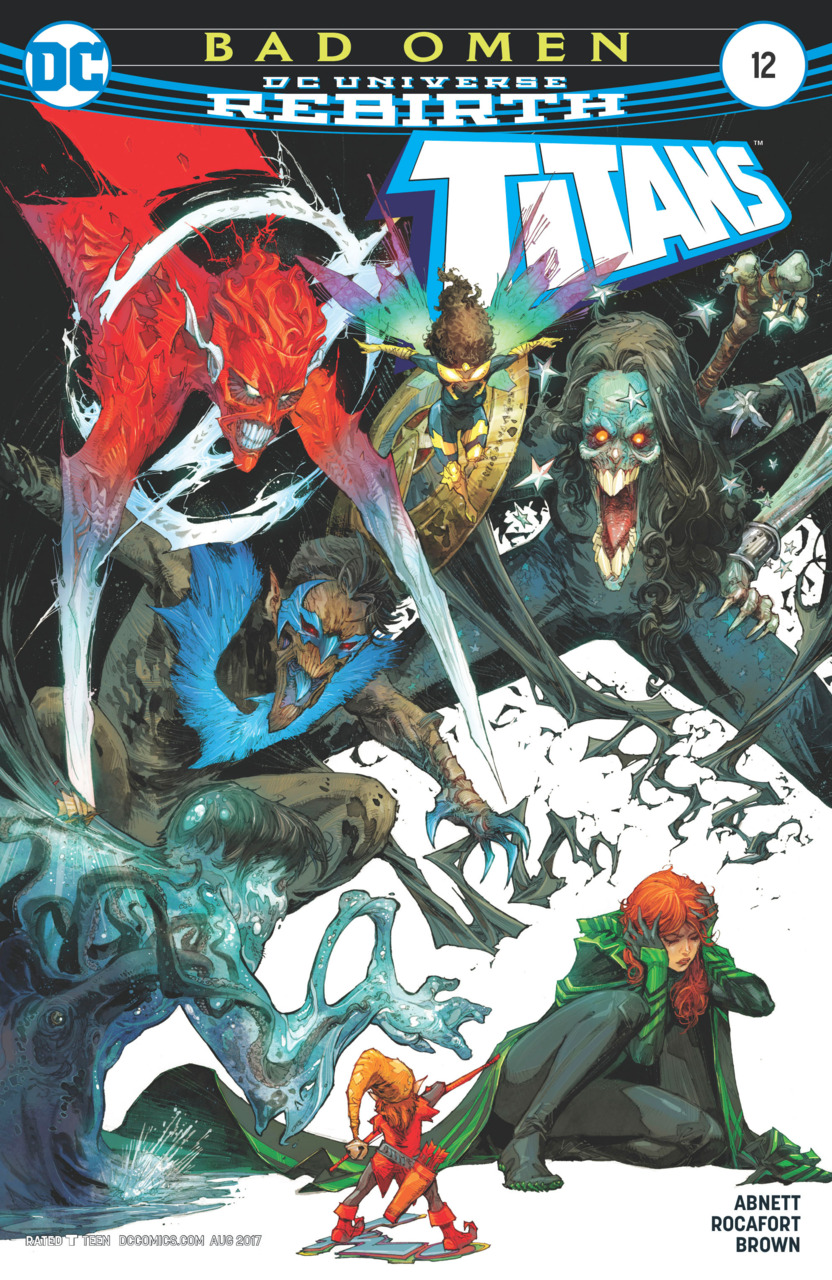 (Spoilers ahead) “Bad Omen” opens in the Rikers Island Correctional Facility in New York. Lilith has an appointment for an interview with one of the inmates, Psimon. The chamber is psi-damped so no one can receive any messages from inside but the two of them can communicate mind to mind. Psimon asks Lilith about not wearing her mask, she just responds that she doesn’t wear one anymore and she has no need to hide who she is. She even gives Psimon her given name, her code name and her team affiliation. Psimon comments on Lilith looking strained but she just says that they stopped Deathstroke. Psimon however interrupts saying that he believes that the Titans are falling apart.

Psimon pears inside Lilith’s thoughts and finds Donna Troy. In response, we see a flashback scene from the day before. In the training room, Donna has dismantled all the combat drones. Psimon reminds the readers that Donna has recently learned that her past as she knew it was not true. She is neither human nor Amazon, she is a magical construct engineered as a weapon. Garth and Lilith walk in asking Donna if she is okay. Donna has just finished and the room is available for the two others to train. Lilith asks if Donna wants to talk, but Donna says that she is good and leaves crossing paths and blowing off Roy. Roy goes into the training room asking why Troy blew him off. Lilith tells Roy that Donna just needs time to adjust and not take anything she says or does personally. Roy just says that it is hard not to. Lilith tells Roy that Donna needs the Titans, but she presses and asks him about his feelings for Donna. Roy snaps asking her if she is reading him and Lilith just says that is what she does. Lilith tells Roy that he should tell Donna before it is too late and Roy just walks out. Garth asks Lilith if she still wants to train and she tells Garth to hit her. The two spar and Lilith actually takes Garth down. She is using her psionics to predict her opponent’s movements. Garth is impressed and reminds her about her advice to Roy. The two kiss and Garth asks her if she read his mind. Lilith tells Garth that she did not have to as it was pretty obvious.

Back to the present time Lilith tells Psimon to stop reading her. Lilith came for an answer and Psimon toys with her telling her that they are only just uncovering the emotional turmoil of the team. He presses in and finds Wally West.

The day before, Donna and Wally are in the kitchen. The topic of their conversation is that Linda Park has apparently dumped Wally. Wally was calling Linda a lot trying to make a connection and Donna tells him that he needs to take it slow. Wally says that slow is not him and she has gotten sick of him bothering her. Wally mentions the pacemaker he now has. Being the Flash is all Wally has left and if he stops being the Flash, he will have nothing left. Donna understands Wally not knowing what is real. Donna suggests that the two should start over and Wally responds with build something new.

Roy is walking towards the kitchen with a bouquet of roses and rehearsing his speech about how he feels about Donna when suddenly he stops. He sees Donna and Wally hugging and kissing one another. Roy throws the bouquet away and says that he was too slow and late.

Back at Rikers Island, Psimon and Lilith continue their mental conversation. Psimon says that the Titans are maladjusted young adults and she is their counselor. Psimon compares the Titans friendship with his Fearsome Five. The Five were never friends. Psimon chides Lilith telling her that she is not very good because he says that she did not mean to have Psimon read her. Lilith just says that she is trying to establish empathy with Psimon. Psimon laughs and says that he is more powerful than her and she is defenseless. Psimon presses to see what Lilith really came for.

In another flashback scene from the day before, we find Mal Duncan, and Nightwing. Mal is taking to Dick about the chunk of memory that Karen lost. Dick says that they are working on it and Mal asks how anyone can even trust Dick after the reveal that he made an agreement with Deathstroke behind the Titans backs. Mal questions Dick letting her stay there and be a Titan. Karen now walks in and says that no one is letting her do anything. Mal tells her that she is not a superhero and Karen retorts that Mal cannot tell her what she is. Mal walks out and Karen realizes she hurt him. Dick promises that they will fix this as soon as they get answers.

In the present day Lilith asks Psimon about Karen’s memory engram. He tells her that her mind contains valuable things that the H.I.V.E. can use. Lilith presses and Psimon says that she is not strong enough to coerce him. After all she cannot manage her team that is falling apart. Psimon now asks Lilith about her code name, Omen. Psimon tells her that she is a warning and asks her what she is an omen for. Psimon believes that here is a threat coming and Lilith is the early warning of that danger. Psimon tells her that he was wrong the threat is not coming, it is here now. Lilith tells Psimon that he is playing mind games with her and gets up to go. Psimon verbally shouts at her saying that she knows he is right. Lilith turns to go and stops. Psimon opened his mind and allows her see the death of the Titans and one of them is not who they seem to be and she knows who the traitor is. Lilith verbally says Alton Laboratories which catches Psimon off guard. The memory engram is at Alton Labs. Psimon admits that Lilith is skillful but not powerful and moves to attack her mentally. She counter attacks knocking Psimon over and showing that she is powerful. She says that she allowed Psimon to see what she wanted him to see.

The Titans gather outside of Alton Laboratories to prepare and attack. Lilith has a voice over wondering who she can trust. All of the team members have some form of brokenness. Psimon’s words are now ringing in her head, one of the Titans will betray the others the only question is who. Next issue a Judas among us.

This was a different issue. It really has no action in it and all we see are character beats that shows the vulnerabilities of each of the members of the team. I like character issues and this is an interesting set up of what we will see in the future issues. However I still would have liked to see a little more action. I was getting tired of reading all the exposition.

The art here I think is a little off. All the characters look more cartoony than I would like. I for one do not like the gratuitous butt shot of Bumble Bee in the last panel. At least here she is an adult and not a teenager.

Overall, it was passable and it does make me want to read next month’s issue.