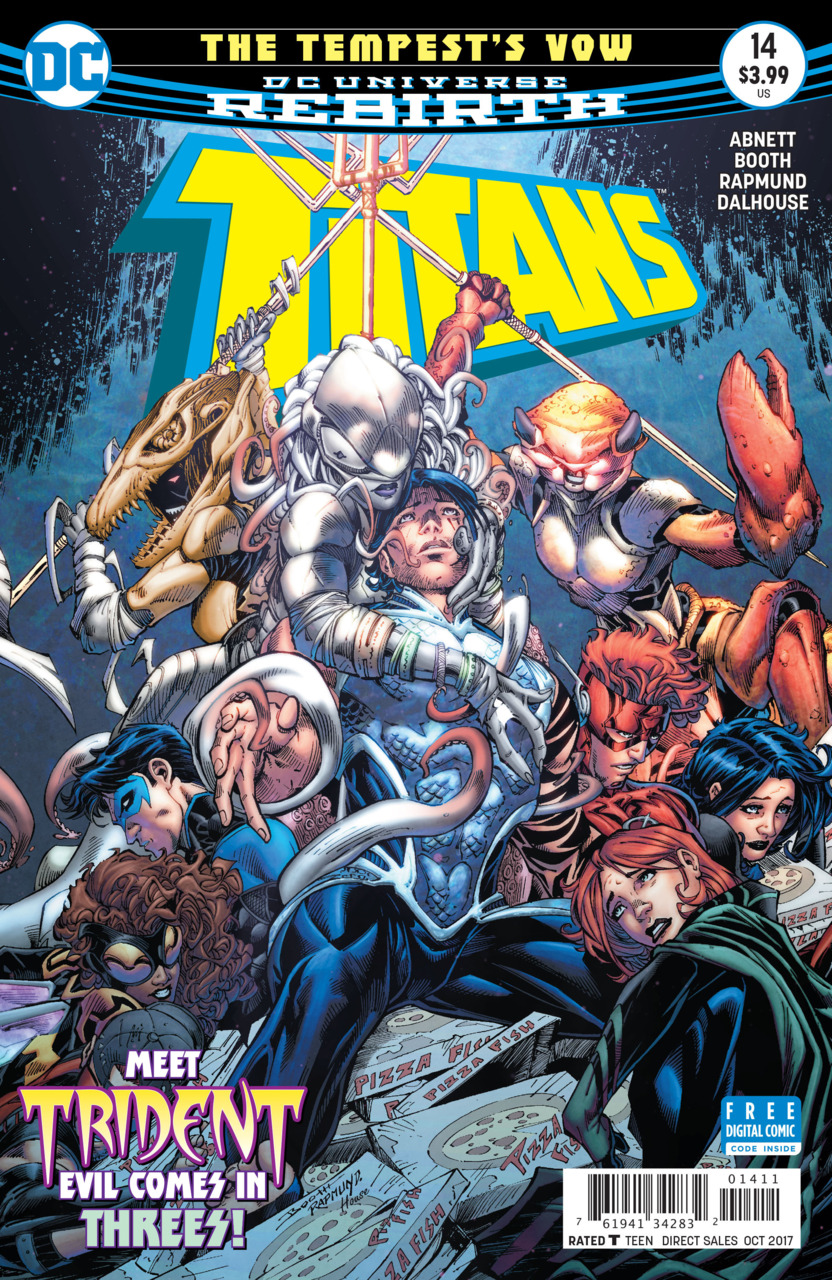 Overview: The Titans’ search for the believed traitor is interrupted by three Atlanteans from Garth’s past. It is possible that the traitor is not Omen, but actually Nightwing.

Synopsis (spoilers ahead): “The Tempest’s Vow” opens at the Pizza Fish Wholesale Cold Storage facility in New York City. The Titans are fighting three Atlanteans called the Trident Three. In the fight the three declare their love for Garth. He trained with them in the Silent School, the Atlantean College of Magic. Garth left but the three were expelled for abuse of the craft. Garth says that they have to stop them quickly because there are bigger problems.

Eight hours ago, the Titans are at Titans Tower. Garth is yelling at Dick for accusing Lilith of being a spy (this occurred at the end of last issue). Dick insists that he does not think that Lilith is willingly betraying the Titans. Garth reminds Dick about the Lazarus Contract with Deathstroke. Lilith separates the two. Garth lets slip that Lilith confided in him. Lilith does admit that it is possible that Psimon is manipulating her but he did tell her that one of the Titans will betray the others. Dick questions Lilith’s decision to keep this information from him, saying that it was not her call. Garth reminds Dick of the Lazarus Contract again and Dick and Garth nearly come to blows. Karen tells Wally that this is all her fault. She laments about letting H.I.V.E. steal her memory. Wally tells her that it is not her fault. Wally addresses the team saying that they have to get this sorted out or he will have a heart attack and the others just stare at him. Roy and Donna berate Wally for his joke but when Donna says that Wally is right about needing to fix this situation Roy mutters under his breath.

Dick tells the team that he has borrowed a piece of equipment from Spyral. The unit scans individuals and runs an analysis to reveal any deep conditioning or mind alteration. Each scan will take a day to process and until Dick sees the results the Tower is placed on lockdown, nobody in or out. Garth agrees but wants to order pizza and he wants everyone scanned. Dick agrees to buy the pizza and places himself in the scanner. All the Titans will be scanned.

Back in the present, the fight continues. The Trident Three asks Garth why he is siding with the surface world over them and Garth asks them why to they seek to kill the surface. We get a small exposition detailing the current events in Aquaman, as Arthur has been deposed and replaced. This is the first that Garth is hearing of this. Garth says that he quit the school because magic is foul and not for him. Dick asks Garth if Lilith knows about these three and their adoration of him. Dick tells Garth that he is a detective and he is not gunning for Lilith. Dick says that he is not and he is happy for them.

Back in the past the pizza has arrived just as all the scans have been completed. Now they need to wait for the analysis. Garth takes a bite of the pizza and spits it out. He says that it is poison that cannot be detected by surface dwellers. The pizza was contaminated with starfish venom. This is what drew the Titans to the pizza store.

In the fight, one of the three decks Garth and Flash races to catch him, but his powers go haywire again. He needs to slow down his heart rate. Roy steps in and shoots Garth’s assailant. He tells Wally that he is sorry about his heart, but he might be becoming a liability. Wally says that his is fine and Roy says that he is moving fast on Donna. The two come to blows and Donna steps in between the two lifting them both off the ground. She does not need to deal with this, she is still trying to figure out who she is. Garth tells Lilith that he loves her and he is about to reveal his second secret. He orders the Titans behind him. He addresses the three by name; Fallone, Sebrus, and Kyella. The girls thought Garth forgot their names. They ask him to join them and Garth uses the magic he learned on the three. We see the girls back in humanoid form and unconscious. Garth says that they know all his secrets and now they need to find out the rest of the truth.

In Gooseville, Maryland Duncan and Gnarrk are on the hunt for a H.I.V.E field station. The two jump through a skylight and start to fight the H.I.V.E. agents inside.

Back at the Tower Dick is waiting for the final analysis. We see on the screen that there is evidence of clandestine collusion detected from the subject of Richard Grayson. Dick deletes the analysis. He turns around and says what could possibly be a com channel that he knows everything and it will not be long before the Titans find out his role. He asks how do they want him to proceed. It appears that Dick is talking to H.I.V.E.

Analysis: This story is both a one and done story and a continuation of a plot point. The one and done aspect provides the action which I felt was very entertaining. We get a call back to the events of Aquaman which given the characters here I feel is appropriate. The action scenes had some humor and action in it. I am happy to get this situation between Roy and Wally out in the open finally and it was numerous to see Donna grab both by the scruff of their necks and basically say enough is enough.

The main part of this story is the search of the traitor as well as the fracturing of the team. We see the fractures in the interchange between Roy and Wally but we also see it between Dick and Garth. Garth is defending the woman he is attracted to, I think it is too soon to say love even though Garth does say it in this issue. Lilith does not explicitly reciprocate Garth’s statement however I do believe that she has an attraction to him as well.

I liked the page featuring Gnarrk and Mal, I would have liked to have seen more. I actually liked the design of these two characters and I am hoping to see them hook up with the Titans soon.

As far as the art goes, I found the panel arrangement interesting. I do not know a lot about art but the layout definitely came to my attention. The panels especially since this issue is told through the eyes and voice of Garth kind of make me think about Garth’s character design with his diagonal sweeping tattoos.

I did notice the detail in the costumes. I especially want to bring up the up close shot of Dick’s glove when he deletes the file at the end of the issue. The art makes his gloves look like tactical gloves, you see the raised knuckles and the detail of the underside of his hand. To me detail is a good thing because it makes it interesting to look at the art. On the same discussion, I did not notice a lack of background that happens from time to time. I like to see the backgrounds and I did notice that in the interchange between Roy and Wally you see Karen in her Bumblebee form blasting in the background and in reality that detail did not have to be included but I am glad it was.

Final Thoughts: Now the elephant in the room, the ending reveal. From the last panels it looks like Dick is the mole here. Given is statement that he now knows what is going on, I can assume that he was unconscious to the influence. The question here is who was the influence? Since Lilith is empathic could Psimon be working through her to get to Dick? I am afraid that the team will fragment at the conclusion of this story line but if that means the addition of Gnarrk and Mal, especially in their current costume designs, I will be all for that inclusion. I really do not want to see any characters leaves except maybe Tempest. He is the only character that I do not have a strong opinion in favor of. Its not that I don’t like him, but I am just not that excited to see him. Overall, a positive issue and definitely driving me to read next month.