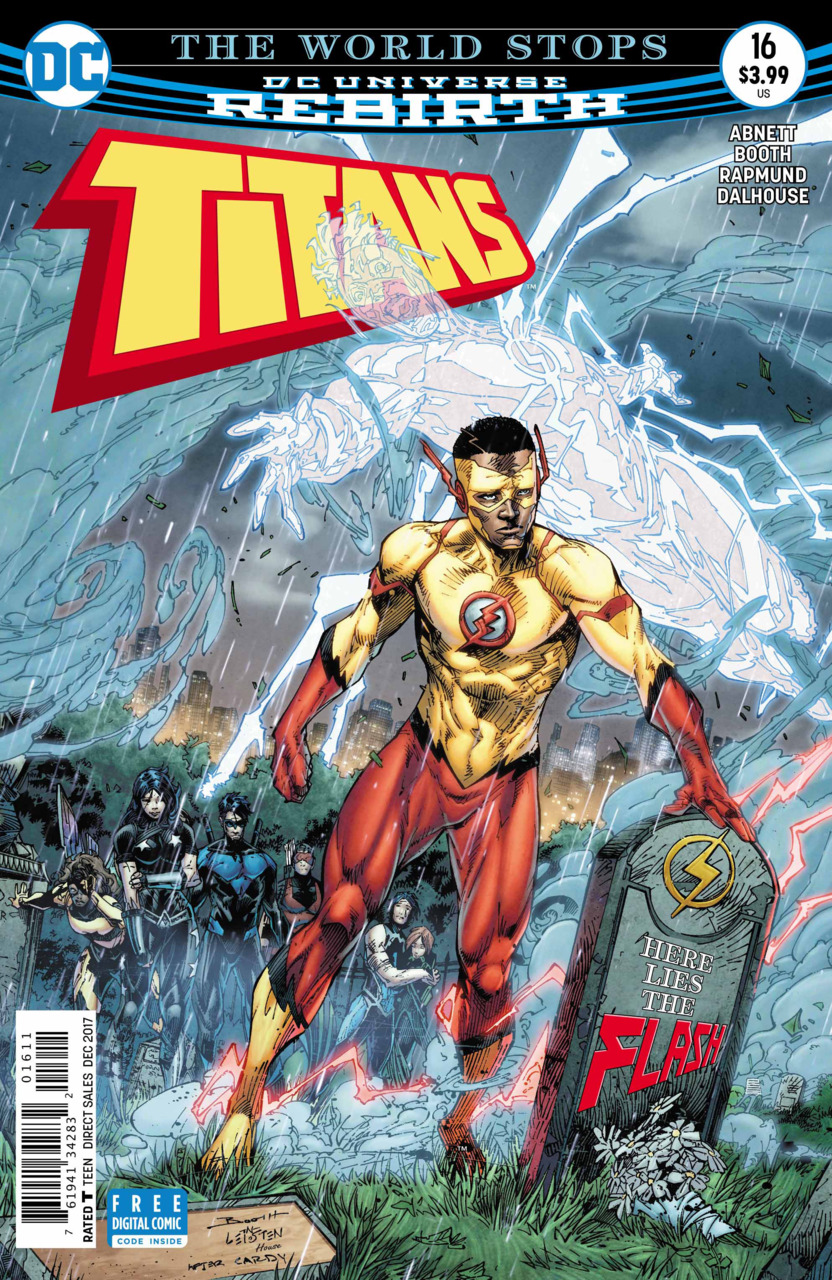 Overview: The Titans grieving over Wally’s death continue their fight against both friend and foe. This fight opens the door to allow the true traitor, Donna Troy, in.

Synopsis (spoilers ahead): The teenage Wally West working in his garage in Central City hears his name screamed out. Someone needs Kid Flash and he races off.

In Delaware, the Titans realize that their friend and the heart of the team Wally West, the Flash is dead. Their shock is interrupted by Psimon, Mal and Gnarrk all possessed by something chastising the Titans telling them to get on with the thing that matters, opening the door and letting her in. The Titans renew their fight. Donna ferociously attacks Gnarrk in a rage. Arsenal and Nightwing fight Mal with calculated forced professional efficiency. Bumblebee pours her grief out on Psimon in a flood of words and stings. Unfortunately, it recklessly opens her up to a psionic attack form Psimon. Garth retaliates by smacking Psimon in the face. Lilith tells Garth to help Karen, she will deal with Psimon. Lilith is soon distracted by Psimon who tells her that Donna is about to kill Gnarrk. She is stopped by Garth and Roy, leaving Dick alone to fight Mal. Dick takes Mal down and Lilith is knocked over by Psimon. Two other players enter the battle, The Key and Mister Twister. Psimon implores them to help them hurt the Titans more so the door will be opened.

Outside, Kid Flash spots the Titans’ jet and the strange storm over the warehouse in Lithgow, Delaware. The storm seems to attempt to stop Kid Flash from entering but he proceeds anyway. He first sees Wally’s body and realizes that he is dead. He turns around to see the fight erupting all around him as Donna fights Key and Arsenal, Bumblebee fight Twister, Garth and Lilith tangle with Psimon, and Nightwing continues his fight with Mal.

Gnarrk attacks Garth leaving Lilith alone with Psimon. Nightwing breaks off from Mal to attack Psimon and is flicked off like a bug. This is taking too long, they are trash talking the Titans all throughout the fight to create emotional pain to open the door and let her in. There is not enough pain and another death, but maybe another death could open the door, so he grabs Arsenal by the neck. Twister on the other hand has another idea. Psimon floods Karen’s mind with all her lost memories all at once. She is flooded with the emotional pain of forgetting her husband and child. She is so distraught that the door finally opens and the true Omen enters to remove her mask and reveal that she is Donna Troy. Next issue Troia.

Analysis: This issue is loaded with emotion and action and I thoroughly enjoyed it. I particularly liked the bringing in of past elements like Mister Twister form Titans Hunt and The Key from the annual, which other than revealing Donna’s true backstory had very little to do with the overall narrative of the regular title. The emotional impact of this is solid and believable. I really believe that the characters would react and use their grief in the ways that were shown. Of course Dick Grayson would fall back on tactics and Donna Troy would erupt into a fury. It may not be that surprising that she is in fact the “she” that was spoken of throughout this issue. The traitor is not Lilith Clay after all. I liked to see the characters react out of emotion. It adds to the ferocity of the battle and that ratchets up the action level to more than just a standard punchy punch run run issue.

The art is dynamic. The artist again uses his page space to create definite backgrounds. The color palette is bright and dynamic in the showing of the psionic energies of Lilith and Psimon and that mixed in with the water powers of Tempest really gives the appearance of a dynamic dismal battle backdrop complete with storms and smoke. I do believe that some of the close up shots still appear a little too cartoony. I especially see this in Donna’s reactions and then especially in the last panel as she is wide eyed and staring at herself.

Final Thoughts: I am interested in completing this arc and I am looking for Hawk and Dove to make an appearance. They are the only characters from Titans Hunt that we have not seen show up in this title yet.