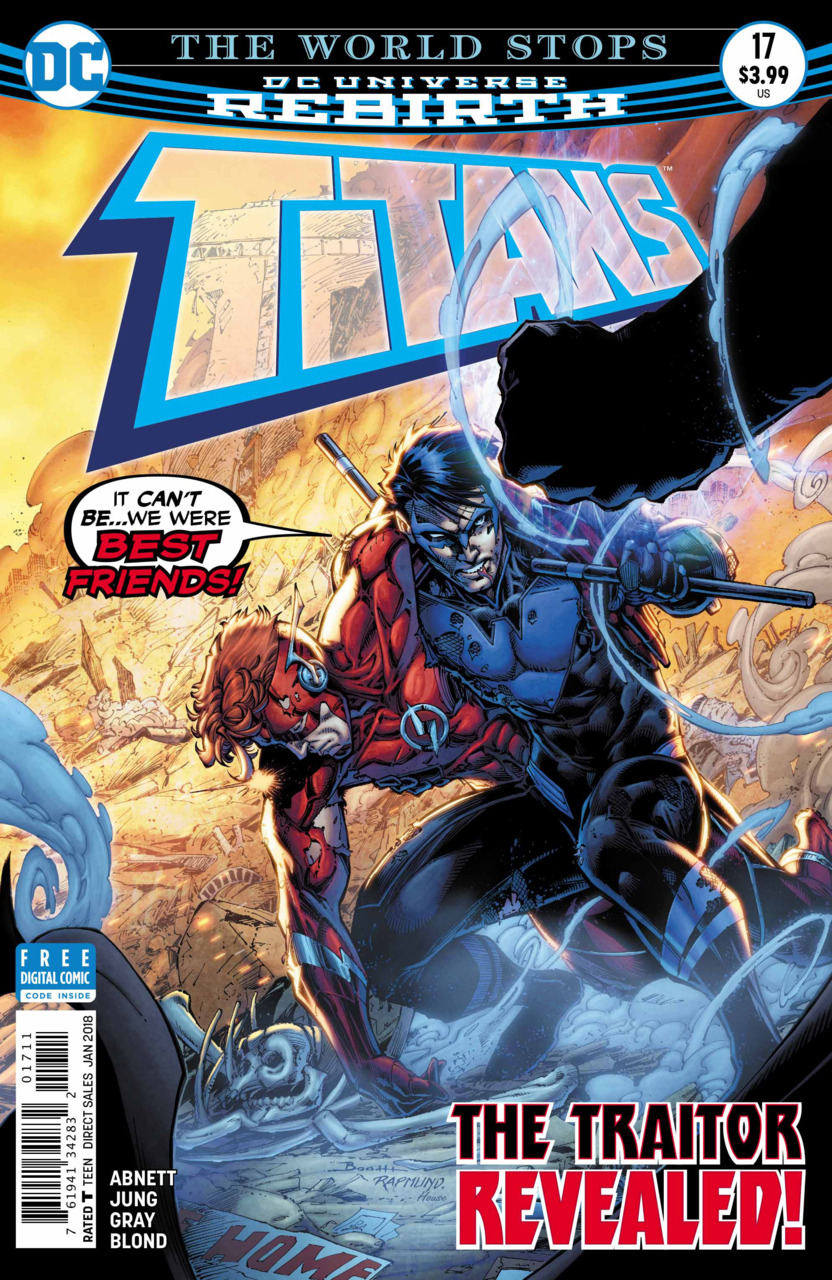 Overview:  Since their reformation, the Titans have been fighting battles on multiple fronts, and with this current story arc, “The World Stops,” a few of those plot lines are starting to tie together.  A gathering of villains, including the Key, Mr. Twister, Psimon, and mind controlled Mal/Herald and Gnarrk have opened the doorway to their mysterious benefactor, revealing her to be none other than Donna Troy herself, only several generations down the line now going by Troia.  Oh, and Wally West is still dead.  The over/under on his return is issue #19.  Get those bets in.

Synopsis (Spoilers Ahead):  Just like it should be with any evil time traveler story, Troia starts dropping truth bombs on the assembled Titans immediately.  Dick becomes Batman and is killed by the Joker.  Roy spirals into addiction.  Garth goes to the dark side with his sorcery.  Lilith takes her own life.  The moral of the story is the Titans all meet gruesome end with the exception of Donna Troy, who lives on due to her immortality and gets more and more jaded.  She has returned to this time period to do her younger self a favor and end the Titans now, effectively getting the ball rolling on her transition to Troia earlier.  While she is grandstanding she and the rest of the assembled Titans take notice of their visitor, New 52 Wally West.  Interestingly enough, Troia doesn’t seem to recognize him and gets taken aback and offended at his use of Wally’s name.  Donna Tory takes this drop in Troia’s guard to kick off the fisticuffs.

The fight picks back up with Troia calling her controlled avatars back to action against the Titans.  As Troia and Donna Troy battle, Troia continues to make her case that this she is inevitable and Troy should stop trying to be anything other than the weapon she was born to become.  Her time with the Titans is but a brief respite as eventually sees them all fall, the first being Wally and the last being Karen who eventually passes from old age.  She goes on and makes a strong case to her past self that she is different than the rest of them, and the sooner she acknowledges it the more heartache she will save herself.  Meanwhile, New 52 Wally West still senses a bit of the speed force within OG Wally West and believes he may be able to bring him back and that’s why he was called to his side.  We end with more of Troia’s impassioned plea to save herself years of pain, revealing that she began her descent the night she killed an aged and ailing Karen.  This stops Troy dead in her tracks and her future self asks her to rejoin the fray and eliminate the Titans.

Analysis:  Dan Abnett has crafted a rarity in time travel stories, a villain that actually makes complete sense.  There is not central turning point the team can change to prevent Donna from eventually turning into Troia, as her future self seems to be a logical progression given her circumstances.  Of course knowing these circumstances will undoubtedly be the impetus that keeps her from going down that dark path, but I digress.  As comic readers we are always in the “now.”  We’ll never see these characters 10 or 20 years down the line outside of time travel stories or the occasional Batman Beyond style book, regardless of how many years pass in our time.  This is why time travel can be a really interesting story trope when it’s handled well.  That look into what’s to come in the future that we will never see is alluring, and in these pages it’s a refreshing and well thought out approach that I appreciate from a creator of Abnett’s caliber.

Titans continues to be one of my favorite books spiraling out of DC Rebirth.  Abnett and crew continually bring us fun stories which acknowledge a deep, shared history between the cast members without getting overly convoluted.  I’m glad to see that he has tightened up the dialogue with this issue as I was growing tired of the (what felt constant) commentary from Titans members on the outskirts of a scene.  Minkyu Jung on pencils with Mick Gray’s inking is a worthy fill-in for series regular Brett Booth.  There is a tight, cinematic feel to this page that really brought me into the story.  There’s great camerawork and the characters all feel loose and natural, especially during the abundant action beats.  Jung’s facial work is also top notch and the portrayal of Troia’s deeply disturbed, maddening expressions were on point.  I wish this team would get a few more issues to shine, but I can’t complain about getting more Brett Booth and Norm Rapmund next issue.

Final Thoughts:  Titans keeps getting better and better.  Dan Abnett is firing on all cylinders and doing what he does best here, giving us a fun story with serious stakes for the Titans.  Troia was a scenery-chewing delight on every page and I’m looking forward to seeing how OG Wallys “death” ties into her storyline.  Moreover, I’m really intrigued that Troia didn’t recognize New 52 Wally.  Is this a case of the post-Crisis DCU leaking back into reality?  I’m hoping Abnett will touch more on that.  Time will tell.