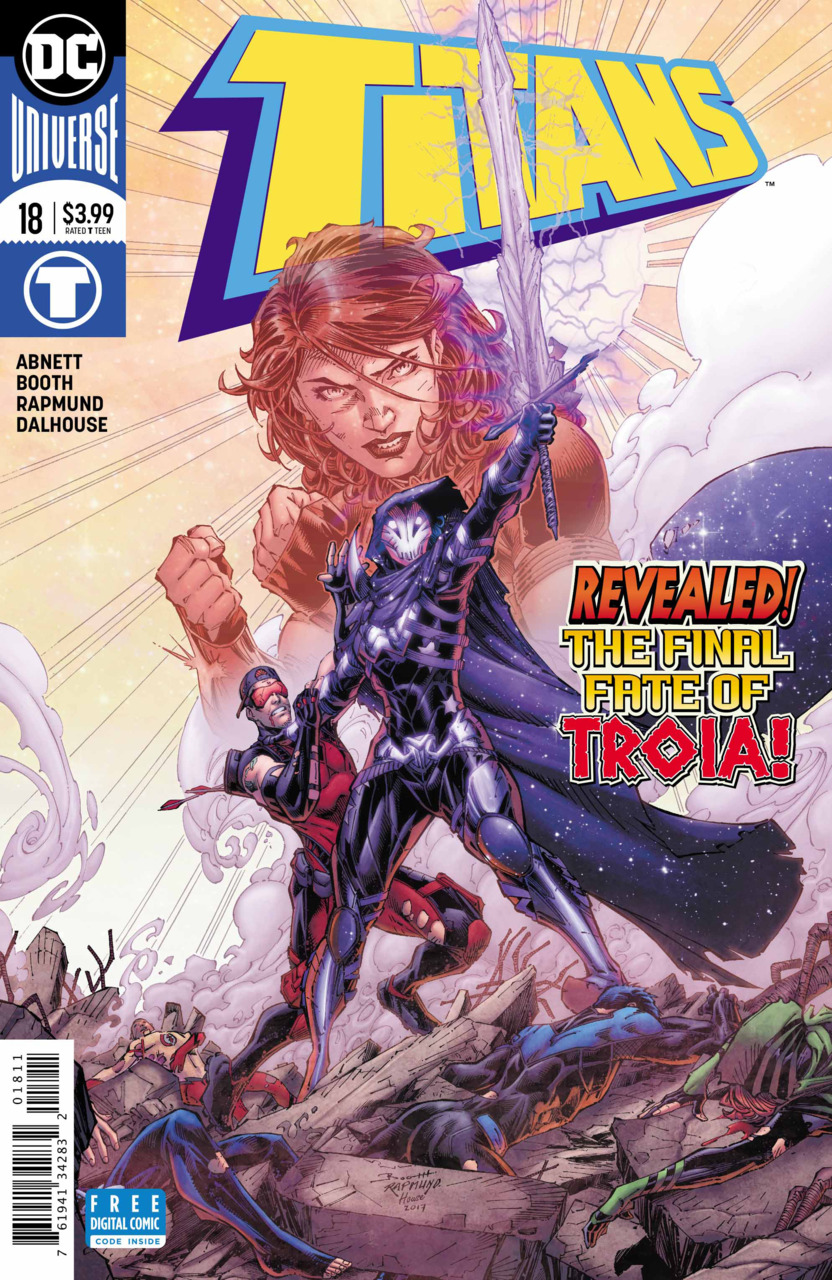 Overview: The Titans, spearheaded by Donna Troy, defeat Troia and her avatars.

Synopsis (spoilers ahead): As Donna recounts the state of the battle against Troia, the Titans (well, what is left of them) are battling Troia’s avatars. While the Titans are fighting the minions, Donna confronts Troia.

Troia taunts Donna that becoming Troia is inevitable since Wally died (in the previous issue, Troia stated that she outlived her friends.)

Wally surprises the team that he is actually alive, thanks to Kid Flash, and he rams into the side of Troia. Donna embraces Wally and he states that he was not necessarily dead, but frozen by the speed force. Wally turns to Kid Flash and teaches him a lesson in asking for help. He states that it is okay to ask for help; you have friends and allies that you can rely on during the tough times. He commissions Kid Flash to go get the Justice League, Teen Titans, or whoever else will answer the call to arms.

As Donna shouts the Titans battle cry, Dick recognizes his friend Wally is alive. Wally asks Dick what the plan of attack is, and Troia retorts that they cannot win since she knows all of Titans weakness. She single-handedly takes out Nightwing, Garth, Lilith, Wally, and Karen; leaving Donna as the only Titan left to stand up to Troia.

As Donna confronts Troia, she quickly gets pummeled while Troia gives another monologue about how the future is set and she will become Troia. Roy intercedes on Donna’s behalf and tries to reason with Troia. He admits his love to Troia. She states that although this may be true, he loves his addiction more. Troia proceeds to choke him; Donna punches Troia and separates Roy from her grasp.

Troia regains her footing, and her and Donna duke it out. Donna resolutely states that she is not Troia and never will be. She then ask Troia with a question: if Donna becomes Troia, then she is the biggest threat that Troia will face. After this question, Donna overpowers Troia and punches her through the portal where she came from.

As the Titans recover from their battle, Roy and Donna talk about how she heard his confession of love while the other members rise to their feet and recover from the battle. They notice that the avatars are free from Troia’s influence and two of them have fled. The Titans track the fleeing and bring them to justice.

Analysis: Titans has some of the best art in all of Rebirth. The creative team of Titans has once again done an amazing job. The art is clean and sharp, while the colors are perfectly balanced. The two-page spreads in this issues are beautiful pieces of art. I would read this title for the art alone.

The focus of this issue was on Donna Troy and Dan Abnett wrote her well. Since Donna is a lot like Diana in terms of being a warrior first and foremost, Abnett gave Donna an emotional, human depth to her character. Whether it is grieving the death of Wally, watching her friends be beaten, struggling with the idea of her future fate, or seeing her and Roy show physical affection, we see Donna not just as the heavy-hitter of the group, but a human with human emotions. She is not the warrior of clay that Wonder Woman told her she was, Donna is more than that. It was beautiful to see how Abnett wrote this change in her character.

Although I love a Donna Troy centric story, I did not like this arc. Let me say this though, the characters were well-written. However, it is the plot device of “a future hero turned evil returns to the past to face themselves” that I dislike. I feel like Rebirth overusing this idea. That said, I am still not sure why Troia appeared. They never quite addressed that throughout this massive battle.

Wally’s death and return were lackluster. With last issue’s narration of Wally’s note to Dick and his subsequent death at the end of the issue, this heart-breaking death could have been an interesting plot point for the next arc and the future of the Titans. With the Titans being so close, the crushing loss of Wally would have thrown the Titans off their respective games. Now with his return, actually becoming “unstuck” in the Speed Force, Wally’s death was meaningless.

I am curious to see if Abnett addresses Wally being “stuck.” We know that Wally and the speed force have a love-hate relationship since returning at the start of Rebirth.

Overall: Donna Troy was well-written and the art was beautiful as always. Thankfully, the plot device of a time-travelling villain is finished and we get move to on a new arc.