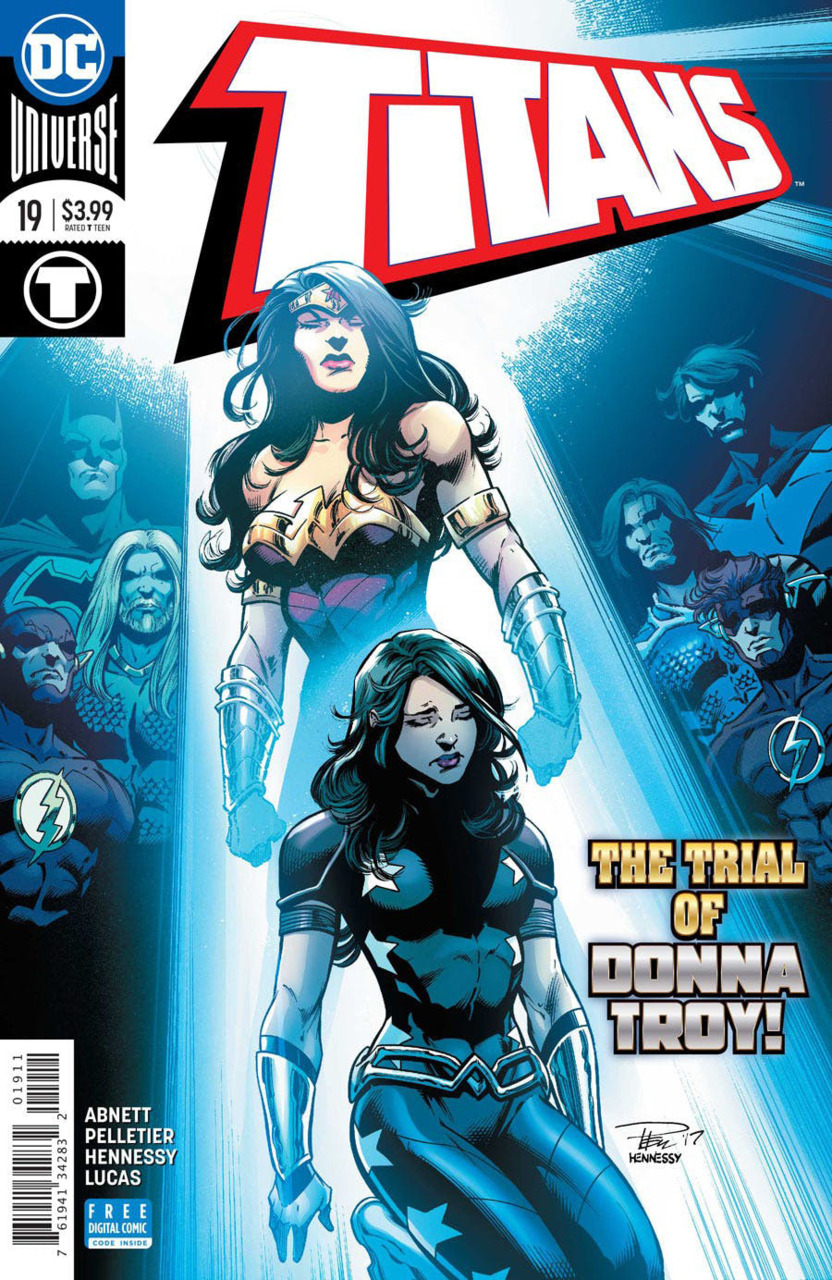 Overview: Now that the whole Troia mess is behind the Titans, the team has to face off with a potentially even more dangerous threat – the Justice League. The Titans found themselves in quite a mess dealing with the future version of their teammate Donna Troy and now their mentors have something to say about how everything was handled, and it doesn’t look like it’s going to be a good conversation for anyone involved.

Synopsis (spoilers ahead): In the very near future, Roy Harper has broken off from the Titans and finds himself working alone to take down a drug cartel. In a phone conversation with Donna Troy he explains that he needs to keep busy to keep his mind off things and fighting crime is the best way he knows how, even if it’s alone. She expresses concern for him as a recovering alcoholic being so close to the temptation, but he assures her Troia’s prediction of his grim future relapse is unfounded and by doing this he will be able to prove that prediction wrong.

Three days prior, the team is in Titans Tower meeting with their counterparts in the Justice League to discuss the resolution to the Troia situation. The older, more experienced League has a great deal to say about how things went down, mostly in regards to their disappointment. Batman accuses the Titans of being rash and reckless according to Nightwing’s report on the incident. This sets off an already volatile situation as the arguments between the teams erupt with Superman doing his best to keep things rational. Batman takes issue with Nightwing’s handling of Wally West and his brief death, citing his unstable powers and heart conditions as reasons he should never have been in the field. Superman gets to the heart of the matter when he says not all threats to the world come in the form of supervillains, which Donna Troy takes as a reference to herself. The League tries to deflect but Omen uses her powers to confirm what everyone assumes – the League wants to shut the Titans down.

Back in the present, Roy Harper’s conversation veers back to his current one man war on the drug trade, revealing that the supply he is tracking down is a new designer drug called Bliss. He is shaking down manufacturers of a knock-off drug who reveal that the makers of Bliss are in charge of that operation as well, in order to drive up demand for the original product. One of the goons being interrogated reveals the entity behind the new drugs on the market – Intergang.

Back during the confrontation during the Justice League and Titans, the Titans turn the tables on their accusers, pointing out the League’s lack of involvement and lies regarding Donna Troy’s true nature (see Titans Annual #1). Batman suggests the team disbands while the League does a full investigation and determines an appropriate course of action, which pushes Nightwing to directly confront his mentor, explaining that the Titans do not answer to the League. Batman’s rebuttal is that the League deals with all superhuman threats, which they feel the Titans could become. As things escalate, Bumblebee breaks down and acknowledges that things have become different and longs for her old status quo. Omen takes responsibility as the team’s psyche for not seeing things coming. Batman directs all of this to a common thread – mistakes were made by all members, which brings the team’s leadership under Nightwing into question. The confrontation between the two continues in private as Batman explains some of the concepts of leadership which are different when dealing with powered individuals, and especially different on a larger scale team like the Titans which draws into account public perception. He goes on to express his own frustrations with dealing with the powers of the Justice League when Nightwing brings up the team’s history of poor decisions. Batman’s final point is that owning up to mistakes and having accountability is how one grows as a leader, and Nightwing realizes what needs to be done. The Titans agree to stand down while Wally West is examined and Donna Troy is taken under Wonder Woman’s wing to ensure she is trained in the right way.

To end the issue, Intergang arrives at the hideout Roy Harper knocked off and as he prepares to ambush them, they ambush him as well as he leaps into action against the odds. It is also revealed that Donna Troy is in seclusion aboard the Justice League’s Watchtower while she and Wonder Woman work things out.

Analysis: It’s a rare moment when I’m drawn into a comic book to the degree that I experience the situations as the characters do. This happened in these pages as I started out irritated at the Justice League’s hubris before shifting into resentment before finally accepting that maybe Batman does have a point. It was a trip, and showed just how well Abnett can connect the reader with the story when he wants to. I absolutely was on Nightwing’s side of the discussion at the opening of the issue. The Justice League was completely out of line by stepping in that way, not to mention that they themselves have had to deal with dozens upon dozens of instances where Batman or another member of the team has made a poor decision and the League had to deal with the fallout. There’s also the fact that there isn’t a training manual for dealing with evil future versions of your teammates. The team did what they could in the situation that arose, and that I can understand. However, the change came around when I started to understand Batman’s point of view as well. There’s a developmental process to becoming a cohesive team unit, as well as a definite learning curve. The team’s existence so far has been hectic, so it’s understandable that they would become defensive immediately rather than consider the League’s position. It all felt very real, like so many family fights I’ve been a part of all my years. Kudos to Abnett for bringing an impressive amount of reality to the dynamics between the two teams/families.

As touched on before, this issue is a spiritual sequel to the last Titans annual, where members of the Titans and Justice League teamed up against the Key. The dynamics between Wonder Woman and Donna Troy as well as Batman and Nightwing were center to the progression of this story and drove the action. Those are both delicate relationships that mishandling could absolutely ruin the credibility of the writer, but Abnett handles both well. The history of the Rebirth iteration of Donna Troy is a bit of a narrative mess but hearing Diana acknowledge that she shouldn’t have kept her distance and been more present for Donna was heartwarming. This offsets the heartbreaking conversation between Batman and Nightwing and Batman’s lack of a response when Nightwing asked if he was disappointed. It is a Schroedinger’s Cat situation that could be read both ways. We may never know how Batman really felt, but the result was the important part as it drove the Titans to their realization of their shortcomings.

Paul Pelletier and Andrew Hennessey are stepping into big shoes as Brett Booth definitely left his mark on the series. The style they bring is similar, but less dynamic and more purposeful. The artists’ interpretations of the Justice League members was especially well received as their looks and stoic nature really brought home the feeling that they have all experienced what the Titans are going through and are there to help. In a smart move, Abnett wove in the story of Roy Harper going solo to give this issue a few much needed action beats that allowed the artists to stretch their creative muscles. It was nice to break up the monotony of the talking head aspect of the majority of the issue and show Pelletier can handle an action scene, even if it was a brief one.

Final Thoughts: I like where this story is going as it’s a logical extension of where the team has been since their reunion. There are growing pains like this that were bound to happen as we’ve seen it all before. Abnett obviously has a longer game planned for these characters, and I’m enjoying how the different arcs have remained separate yet blended well and told an overarching story. This feels like the end of the beginning of the story Abnett wants to tell. I’m excited for what’s to come as Titans has remained one of the most consistent books DC has published the past almost two years, but I’m a little worried for Roy Harper, as it looks like the next few issues are going to be very tough on him. There’s a lot of foreshadowing of him coming face to face with a relapse of his addiction, and I’m hoping if the story goes that direction Abnett really uses it to say something, not just as a story beat.