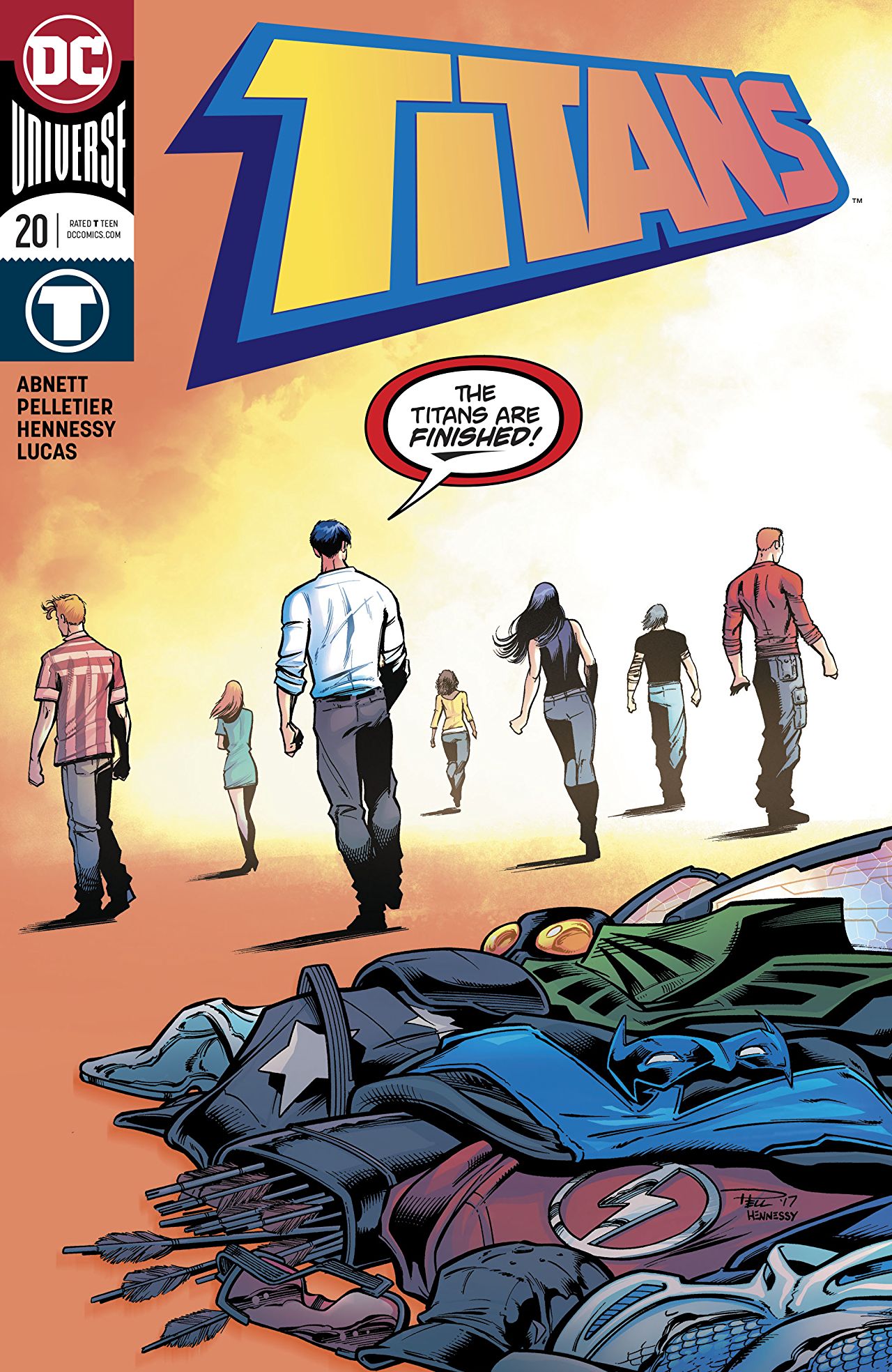 Overview: With the team dissolved by the Justice League, the Titans try to continue with their lives away from their friends. Roy, knee-deep in a drug-bust mission, gets the unexpected help of Cheshire to retrieve an original sample.

Synopsis (spoilers ahead): Picking up right where issue #19 ended, Roy is under a shower of bullets after been found sniffing around a drug lab. He manages to escape the men coming after him for a while but gets caught ultimately. Cheshire appears out of thin air and rescues him.

After escaping the crossfire, they go have dinner in a noodle restaurant. She questions his reasons to be alone and dealing with a drug cartel, considering his past. He dodges the question about the Titans but assures her that he is more than competent enough to deal with a drug bust and not fall into old habits. This brings up the question of Cheshire even being there. She says she has been paid to “obtain justice” for a group of families who lost their loved ones to drugs. Roy talks about his leads, and Cheshire suggests she has been following the same ones. They agree on working together to retrieve an original sample of the drug.

The next day, as Roy heads to the meeting point, he calls Donna. Confined to the headquarters of the Justice League, she has been keeping in touch with Roy despite the League’s recommendations not to. Roy believes though that the constant contact is only making things worse for both of them, prolonging the pain, so he cuts communication with her.

Wonder Woman gets to Donna’s room to find her unbalanced, looking out the window. She admits to being worried about Roy, but Diana guarantees that, even though Roy has no mentor to look out for him, he is probably being watched by Dick and Wally.

Meanwhile, Dick is helping Wally move into his new apartment. Wally is finally feeling like he’s getting his life settled after the time-displacement, but with the dissolution of the Titans, both he and Dick are feeling a little lost.

Roy and Cheshire are, at that point, taking out Intergang’s guards. They retrieve the drug samples and head to Roy’s place to have dinner. This time, on him. They have takeout pizza and discuss what to do with the drugs, but it ends up with the pair taking a trip down memory lane and going to bed together.

Analysis: Dan Abnett has been weaving his run on Titans having the characters and their relationships upfront. The foe they’re facing is less important than the team itself. It harkens back to the soap-opera feel that Wolfman and Perez had in their run on the New Teen Titans, and it is no wonder that theirs was a successful run. This is not the only thing inherited from Perez, as the cover art refers to The New Teen Titans #39. The issue marked the moment when Wally left the team and Dick stopped being Robin, and it was followed by The Judas Contract and Dick’s debut as Nightwing. If anything else, this might be a suggestion that changes are to come. In this slow-paced issue, Abnett works with the currently broken dynamic of the group to move his chess pieces into strategic positions. At first glance, it might even seem like little has happened in the issue, but the characters have all been moved on the chessboard – even if off-panel, when Dick tells Wally of the whereabouts of the entire team.

Almost as if he was working with precise measurements, Dan now has the characters in a perfect recipe for disaster. Dick blaming himself for their situation, Donna isolated and itching for action, Wally feeling lost and without a supporting system again, and Roy. The archer is once more stumbling down a road to self-sufficiency that will surely lead to a crash, and it is his tale that takes the forefront of the issue. The issue is very close to a character study on Roy Harper. He’s got a heavy past that weighs him down at times, making himself and other people doubt him every once in a while. His support system is his friends and them only, but he is too proud to seek them in a time of need. In fact, he does not seem to realize he needs help until it’s too late. When loneliness hits him he makes some poor decisions, and when everything comes crashing down he lets that one bad turn overshadow the fact that he did right, to begin with. The last couple of issues have been a showcase by Abnett of all of those peculiarities to Roy, and he has been doing so with mastery.

Having the Titans spread all over leads to some location-hopping along the issue but Paul Pelletier never fails in setting the stage at the beginning of a scene. Every location change opens with a panel that situates where and when the scene will be taking place, be it the Justice League’s satellite, a noodle joint or a back alley. The one downside to Pelletier’s art is how all of his characters look almost entirely the same, it can be said it is his Achilles heel. His human figures are expressive, with well-marked features and slightly exaggerated proportions, all it takes for them to gain individuality. It is only missing that one final stretch. This does not weigh down his art though, his storytelling and camera moves greatly outshining any issue with the characters. He works with the camera to create mood, especially in talking scenes. Starting with wide shots, he then changes the shot from side to side, from focusing on one character and then the other, and finally starts to push the camera in, focusing on their faces and expressions as they talk. On the one intimate scene between Cheshire and Roy, the camera gets so close that their faces do not fit the panel. We, the readers, are the third, uninvited party in the play.

Final Thoughts: A well constructed, slow-paced issue that reads both as a setup for what is to come for the team and a character study of Roy Harper. Dominated by talking scenes, Pelletier is essential in creating mood and visual dynamics even when the characters are not involved in action scenes.